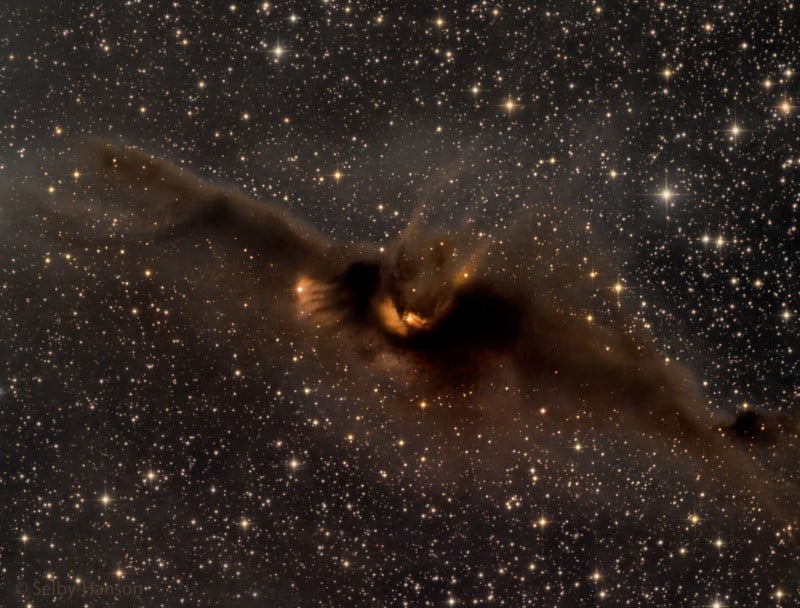 Photographer Mark Hanson captured what he describes as the “rarely-imaged” LDN 43, a dark nebula that is made up of very dense material and blocks light from surrounding stars, creating a shape of a giant cosmic bat.

The photo was taken by Mike Hanson (and processed by both Hanson and Mike Selby) this past July but given its spooky theme, NASA chose Halloween to share it as the Astronomy Picture of the Day.

“What is the most spook-tacular nebula in the galaxy?” NASA asks. “One contender is LDN 43, which bears an astonishing resemblance to a vast cosmic bat flying amongst the stars on a dark Halloween night.”

Hanson is an astrophotographer and says he’s been pointing his camera into the cosmos for more than 25 years. Originally shooting from Wisconsin, he moved his equipment to the darker skies of New Mexico and then to El Sauce, Chile where he operates them remotely.

Hanson says his photo of LDN 43 frames LBN 7 as what is known as a bright “reflection nebula.” Inside the dark nebula are two cometary nebulae GN 16.31.3 and GN 16.31.7. A reflection nebula is an astronomical term for clouds of interstellar dust that might reflect the light of a nearby star or stars. The energy that is being emitted from nearby stars is not strong enough to ionize the gas of the nebula which would create an emission nebula, but it is strong enough to scatter light and make the dust visible to telescopes.

“Located about 1400 light-years away in the constellation Ophiuchus, this molecular cloud is dense enough to block light not only from background stars, but from wisps of gas lit up by the nearby reflection nebula LBN 7,” NASA continues. “Far from being a harbinger of death, this 12-light year-long filament of gas and dust is actually a stellar nursery. Glowing with eerie light, the bat is lit up from inside by dense gaseous knots that have just formed young stars.”

The cosmic bat is just one of several cosmic phenomena that Hason has captured over the years and the avid astrophotogapher lists many of his photos for sale on his personal website where visitors are treated to a host of incredible images of the night sky.