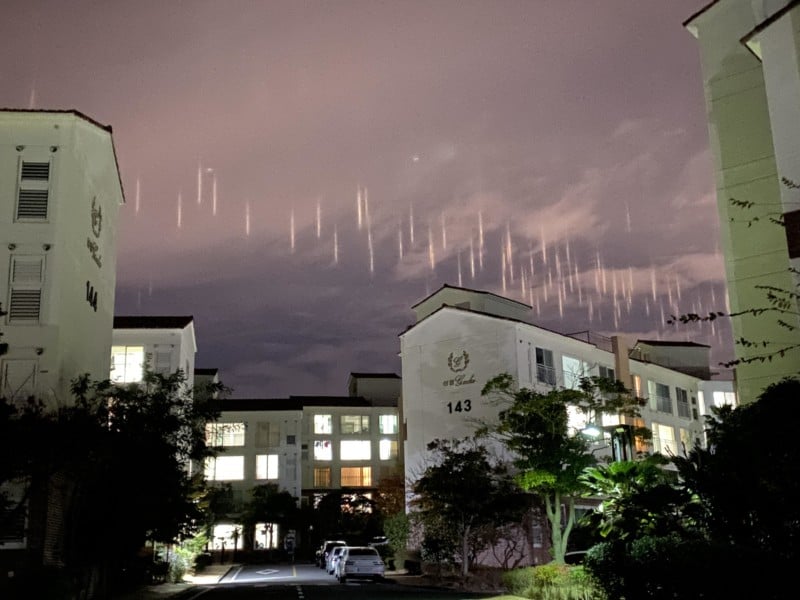 A photographer was left baffled after he captured a series of strange lights over a city in South Korea on Monday.


The photographer posted his image to Reddit in a bid to find out what was happening in the skies over Jeju, Korea.

Jeju City is situated on a large island off the Korean peninsula and is a holiday destination thanks to its beautiful beaches, lush countryside, and seaside hotels.

What Are The Lights?

The curious illuminations have been explained as light pillars, the phenomenon occurs when high-level clouds reflect light from the lamps of fishing boats on the water, according to Korea-based Yonhap News Agency.

Reddit users were also quick to point out that the bizarre sight was pillars of light. Wikipedia explains it as “an atmospheric optical phenomenon in which a vertical beam of light appears to extend above and/or below a light source.”

Tiny ice crystals suspended in high-altitude clouds reflect light to form the pillars. The light source can come from the Sun when it is near or below the horizon. However, light pillars can also be caused by the Moon or terrestrial sources, such as fishing boat lights.

Predictably, Reddit users leaped on the photo for some good-natured joshing. “I for one welcome our alien overlords,” writes Davidjschloss.

“Yeah, but who is putting those prism mirrors into the sky? Aliens,” writes another.

However, another points out the ease with which people can find out facts on a subject that might have been written off as an extraterrestrial event.

“20 years ago this picture would have been written off as a UFO sighting. I like how science and phone cameras solve this problem easily with a little bit of searching,” adds one person.

In March this year, PetaPixel reported on a Brazilian photographer in Norway who captured an rare photo of light pillars alongside the northern lights in one dazzling image.