Snapchat is making the desktop version of its app, Snapchat for Web, available to all users worldwide.

The company initially launched Snapchat for Web in July to Snapchat+ subscribers in the United States, United Kingdom, Canada, Australia and New Zealand. Now, the desktop version can be accessed by all Snapchat users.

With Snapchat for Web, users will be able to send messages and Snaps, as well as chat via video and voice calls. Snapchat for Web also includes access to the mobile app’s messaging features, including chat reactions. It also now features more than 10 Lenses for video calls.

However TechCrunch reports that the company is aware that people can still take a photo of the screen from their phone, noting that the product is not yet perfect. 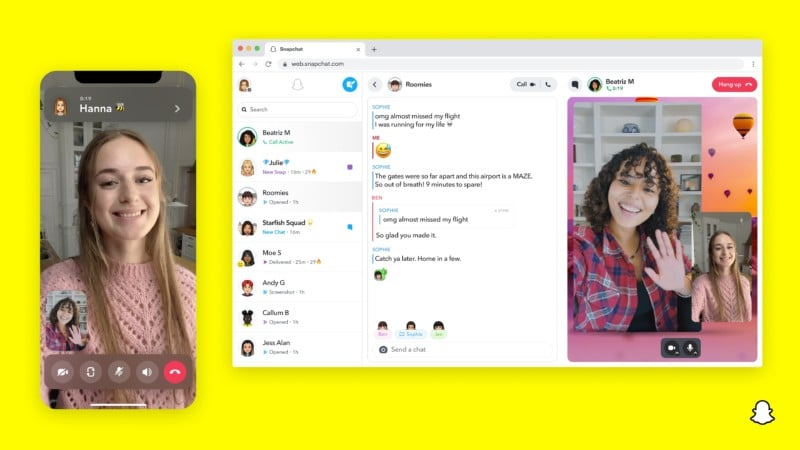 To access Snapchat for Web, users need to head to web.snapchat.com and log in with their Snapchat username and password. Users will then be prompted to complete a two-step verification on their phone. Once they have opened Snapchat for Web, they can continue their conversations from where they left them on the mobile app.

On Snapchat for Web, a user’s Bitmoji will appear in chats holding a laptop to indicate to others that they are accessing the chat via your desktop. In addition, the web version of the app includes a privacy screen that hides the Snapchat window if they click away for another task.

Snap is currently focused on bringing the app’s core features to the web. However, the company plans to bring the app’s other features, including viewing Stories and Memories to Snapchat for Web in the future.

The worldwide launch of Snapchat for Web comes as the social media giant looks to better compete with TikTok and Instagram, both of which can be accessed on a web browser. Snapchat also launched its own dual-camera feature in an attempt to capitalize on photo-sharing app BeReal’s current popularity.

The new feature comes after it was revealed Snap would be laying off 20 percent of its staff this month.