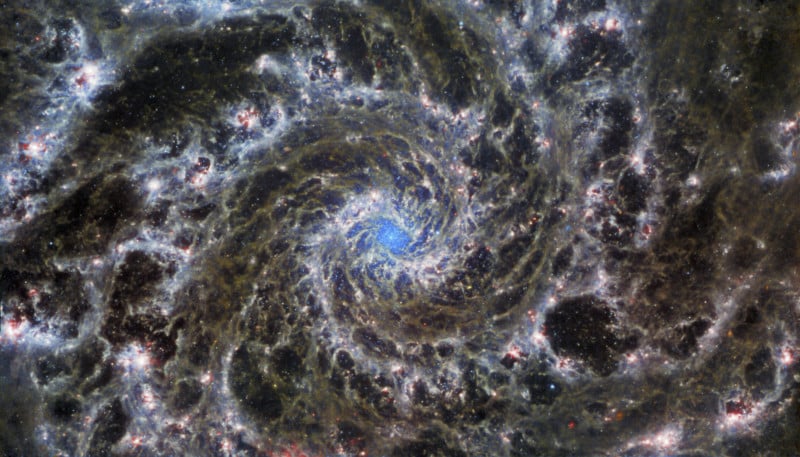 The James Webb Space Telescope’s (JWST) mid-infrared instrument (MIRI) has been used to capture a gorgeous and mesmerizing photo of the heart of galaxy M74, also known as the Phantom Galaxy.

The Phantom Galaxy is about 32-million light-years away from Earth in the constellation Pisces, the European Space Agency (ESA) explains. It lies almost face-on with Earth, which when combined with its well-defined spiral makes it a regular and favorite target for astronomers that study the structure of galactic spirals.

“Webb’s sharp vision has revealed delicate filaments of gas and dust in the grandiose spiral arms which wind outwards from the center of this image,” the ESA writes.

“A lack of gas in the nuclear region also provides an unobscured view of the nuclear star cluster at the galaxy’s center. M74 is a particular class of spiral galaxy known as a ‘grand design spiral’, meaning that its spiral arms are prominent and well-defined, unlike the patchy and ragged structure seen in some spiral galaxies.”

Scientists used the JWST’s MIRI camera to capture the Phantom Galaxy so they could learn more about the earliest phases of star formation in the universe, which the ESA says is part of a larger effort to chart 19 nearby star-forming galaxies in the infrared. 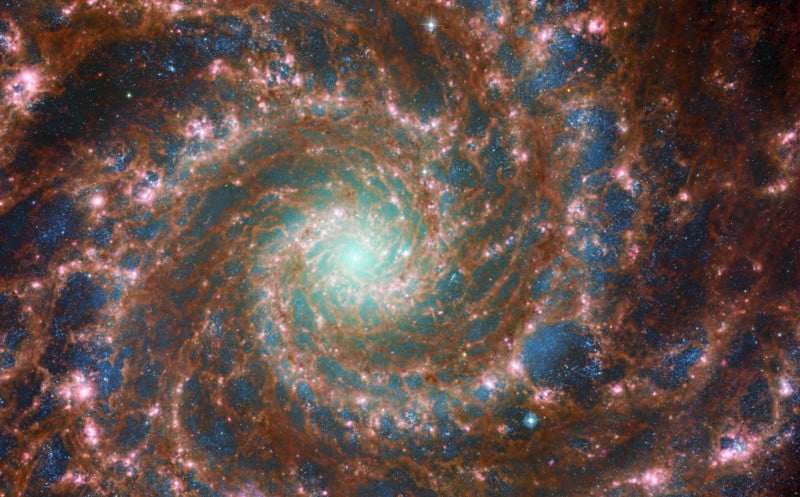 “M74 shines at its brightest in this combined optical/mid-infrared image,” the ESA explains. “With Hubble’s venerable Advanced Camera for Surveys (ACS) and Webb’s powerful Mid-InfraRed Instrument (MIRI) capturing a range of wavelengths, this new image has remarkable depth.

“The red colors mark dust threaded through the arms of the galaxy, lighter oranges being areas of hotter dust. The young stars throughout the arms and the nuclear core are picked out in blue. Heavier, older stars towards the galaxy’s centre are shown in cyan and green, projecting a spooky glow from the core of the Phantom Galaxy. Bubbles of star formation are also visible in pink across the arms. Such a variety of galactic features is rare to see in a single image. Scientists combine data from telescopes operating across the electromagnetic spectrum to truly understand astronomical objects.”

These galaxies have already been observed by the Hubble Space Telescope, but the JWST’s higher-resolution and shaper camera system as well as its ability to capture images at longer wavelengths will provide the international PHANGS collaboration scientists with additional insights into star-forming regions such as the Phantom Galaxy.

Below is a comparison of three images, one that is the Hubble Optical capture, one that is a combination of Hubble and the JWST, and finally one that is simply JWST: 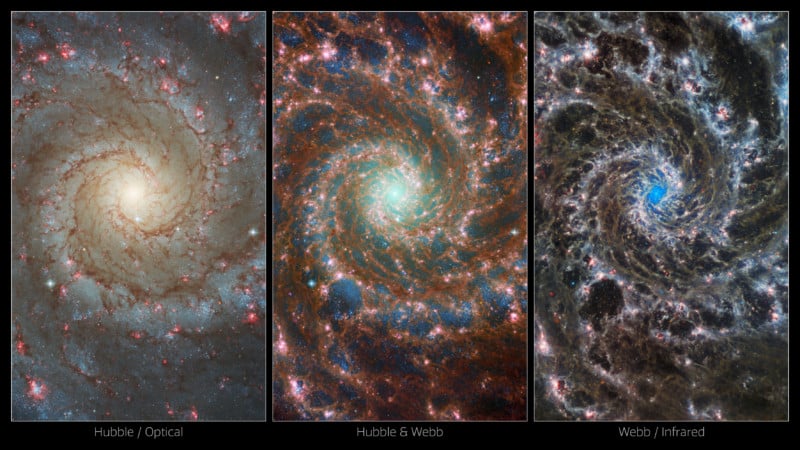 The Webb image was processed by citizen scientist Judy Scmidt, who has worked with Hubble and other telescope data as a hobby for 10 years. She was also recently responsible for the processing of the image the JWST took of Jupiter.