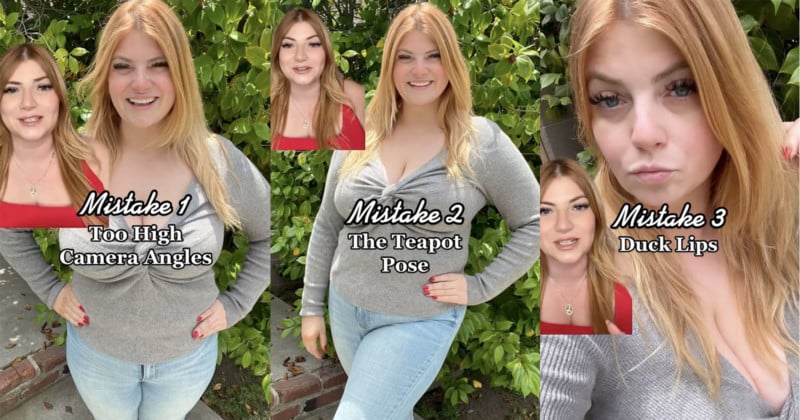 Posing experts are on the rise and Christine Buzan is telling millennials to stop using certain angles and stances when taking photos.

Buzan, who goes by the moniker Look Good in Photos, believes that people can practice poses to become more photogenic and has called out millennials to stop the same old stances.

“What most people don’t realize is that posing has trends just like fashion does,” she explains in a TikTok video.

“So specific things come in and out of style, and if you’re doing something that’s out of style your pictures might look a bit dated.”

@lookgoodinphotos Here are 3 posing mistakes millennials need to stop making. Let me know if you do any of them! #posingtips #millennialsoftiktok ♬ original sound – CHRISTINE BUZAN | POSING TIPS

In her video series where she targets millennials, those aged between 25 and 40 years old, Buzan tells Generation Y to stop taking photos from a high angle.

“Not only does it make your body look completely distorted, for instance, look how big my shoulders are and look how little my knees are,” she says in front of a greenscreen photo of herself.

Next up on Buzan’s faux pax list, she targets the “Teapot Pose,” where the sitter places a hand on their hip.

“I understand you may want to make your arm look smaller, however, there are many different poses that you can use to do that that don’t look as fake and as forced,” she says.

“The truth is, is that this pose is really a relic of our digital camera days when we didn’t have unlimited spaces and didn’t have a phone with our camera on at all times so we had to look really good for pictures.

“There’s nothing more ridiculous that when we see a bunch of women doing this pose all in a row. It’s like ‘Yeah, you’re at a kid’s birthday party,’ why are you posing like you’re on a red carpet?'”

Then, Buzan targets “Duck Lips” where models push their lips out as if waiting for a kiss.

This just isn’t cute, it’s very forced, very awkward. And you would be shocked at how many people are still posting selfies like this on their Instagram.”

The video has racked up over 1.3 million views and sparked further TikToks from Buzan criticizing millennial photo poses, including “Three millennial group poses to stop doing.”

Earlier this year, PetaPixel reported on David Suh who runs a course entitled “How to be Photogenic in 30 Days.”

For more of Buzan’s work visit her TikTok and Instagram.