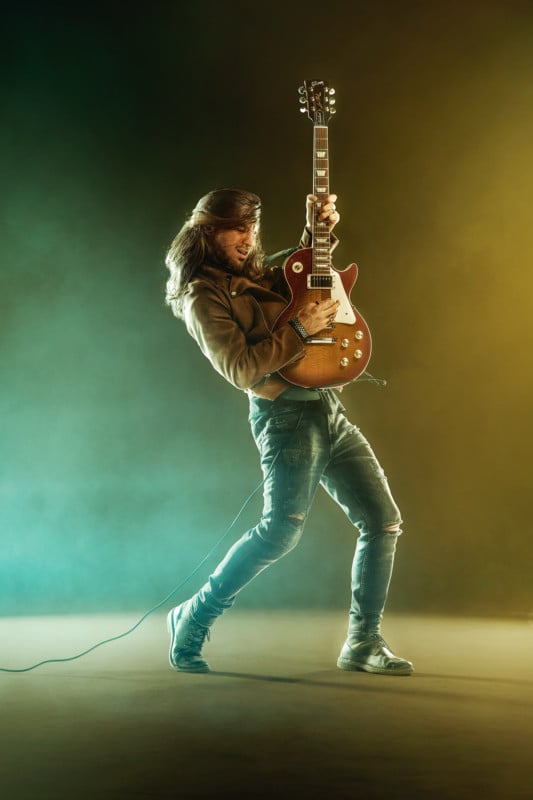 Of all the arts available to mankind, my heart belongs to music. Perhaps it’s a sentiment that doesn’t serve my self-interest much, as my only achievements in the arts have come through photography. The fact that my creativity has come by way of visuals has not been from lack of attempts in the audio world. Ten years of playing the piano as a child has given me the gift of being able to play one verse from Beethoven’s 5th at a cocktail party.

In many ways I believe that fate had determined that I shouldn’t have taken guitar lessons, and instead that I should be practicing composition of the visual order through a viewfinder. It is for this reason that when I had the opportunity to create a photo series around musicians, I truly had the time of my life on set. I was vicariously living through them as we went through different motions of playing guitar and jamming out. While they were both models, they are also active musicians, so the finger placements and passion shown in the imagery is real. We were blasting everything in the studio from AC/DC to Disturbed and Fall Out Boy to Pantera. It was as if the music that was in my mind during a shoot was being broadcast. 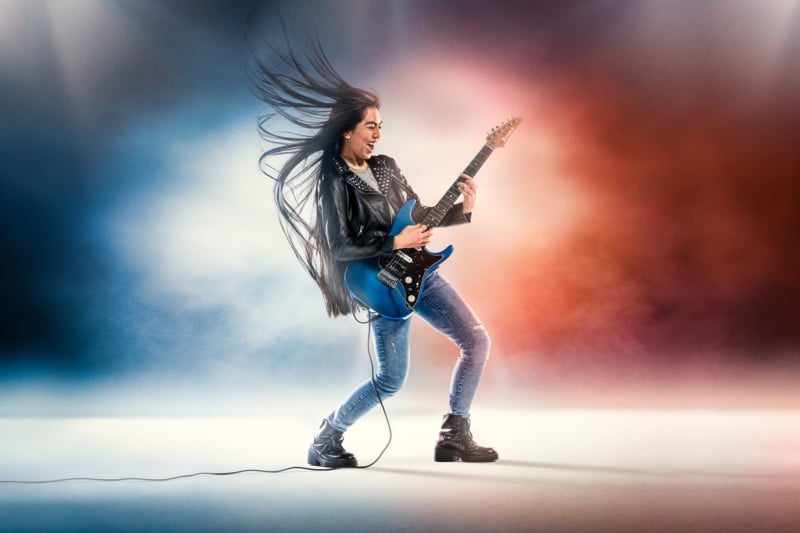 It wasn’t untill we wrapped for lunch and I sat with the musicians and talked about what drove them that I found the correlations between photography and music are more similar than I thought. It wasn’t necessarily performance or being seen that mattered to them, but rather the need to have an expression, just like I have felt about photography. In many ways a career in art starts as one that is extraordinarily extrospective, but as one progresses through it becomes introspective, yet on public display.

Normally on a photo shoot I only take a few minutes off for lunch, as I don’t really like to eat during a shoot for fear that it’ll slow me down behind the camera. Thankfully I have an assistant who always carries Snickers so that I don’t get hangry. However, on this shoot, things were a bit different as the conversations I had with the models made me think even harder into how I could express what they had just talked about with my camera. At the end of a shoot of jamming and rocking with crazy intensity, I asked the male model if he would stay behind for one shot as I wanted to show visually how much his guitar meant to him. It wasn’t staged or forced, but natural, and in many ways it was touching because I could see in a single image that music was just as necessary to him as breathing. 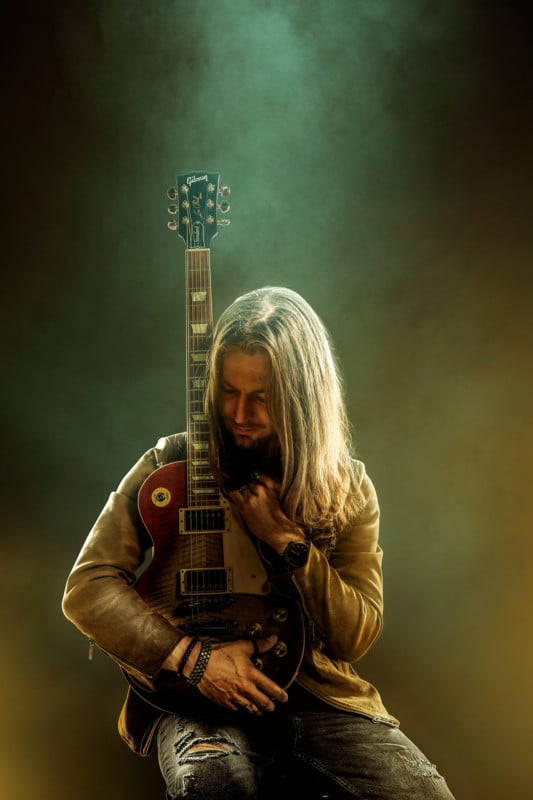 As photographers, we have many different approaches to the same art. And just as we go into our workflow of creating differently, many of us also view photography’s place in our lives differently. For me, I’ve found that I need to create. It isn’t about money, publicity or fame. It’s about making sure I have the opportunity to show the world what I see before my time is over.

Returning to my initial statement though, I sincerely don’t believe my commercial photography would be what it is without music. To say I am obsessed with music is actually quite an understatement. I live through music. It is the inspiration behind every athlete or celebrity I have photographed, every fighter jet or freight train I have shown. All of them have songs or scores or even chords behind them that lived in my mind while I created the images that you see. With the breadth of my music catalog being so random, I thought I would share some images they’ve created along with the music that I was listening to at the time. I don’t know if this helps anyone gain insight on my creative process, but I hope it will show you that we are all more similar than we think. 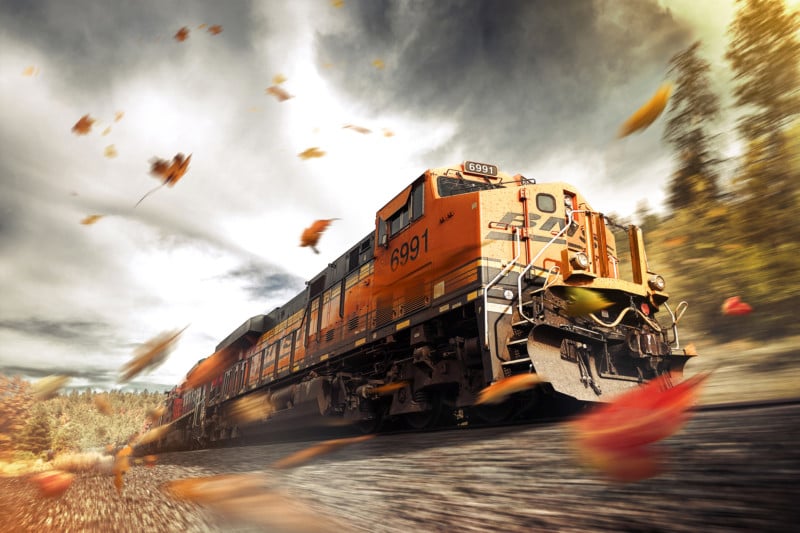 The first image is one of the more recent train shots I did. It has the leaves that my dog Riley used to lay on blowing in the wind as an orange locomotive passes. For this one I was listening to Nocturne No. 2 in E Flat (Op 9 No.2) by Chopin. I had been going out to the tracks to create a series to remember Riley, and that song was the last one that he and I ever listened to. While it was difficult, I felt that keeping the emotion strong would ensure that the image did my feelings for him justice. 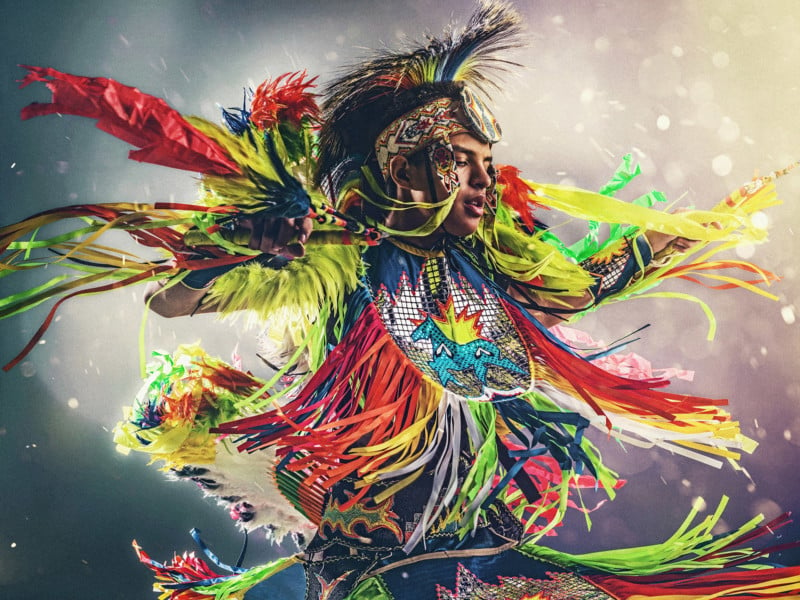 The next image is one that I shot of a tribal dancer in the studio. I had gone into this production listening to different music from Native American tribes to see if there was a vision that would come to mind for the frame. To be honest, nothing really materialized in my mind until the model came to set and told me that when he dances at home for practice, he listens to metal. So we created this image while listening to Disturbed in the studio. 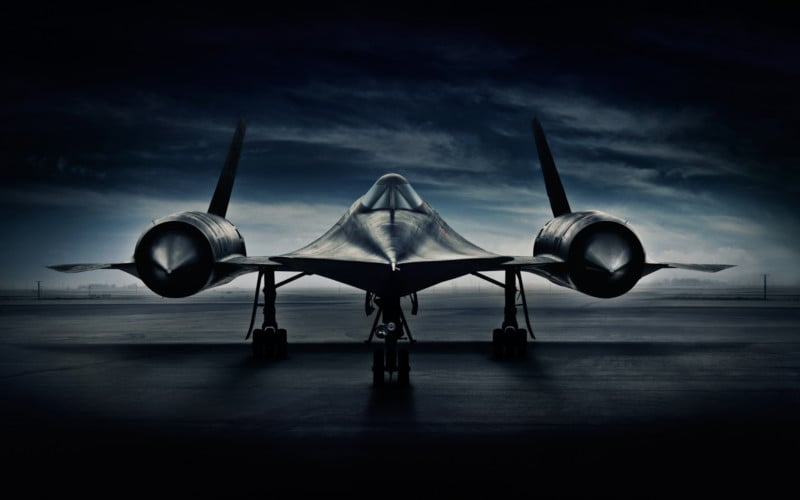 The next image is of Dwyane Wade, photographed for Li-Ning in Beijing, China. While my job has always required me to travel, being in China always felt like I was on the other side of the world from my family. When I would take breaks on set and walk around the gym we had closed down for this production, I would put my headphones in and listen to Georgia on My Mind by Ray Charles. I’ve always had a funny habit of listening to that song whenever the pilot comes on the intercom during a flight and says we are preparing for landing. For some reason it just makes me feel like I’m coming home. 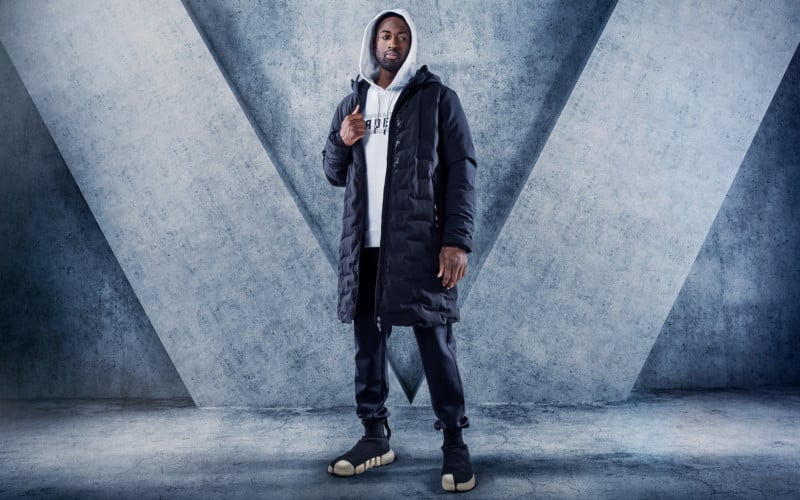 For this photo of the SR-71 Blackbird, I’d been spending a lot of time listening to German metal. It was the best balance I could get between symphony and pure metal, and I felt the right mood for this dark military aircraft photo. The song that lived on repeat before and during this shoot was Sacred Worlds by Blind Guardian. 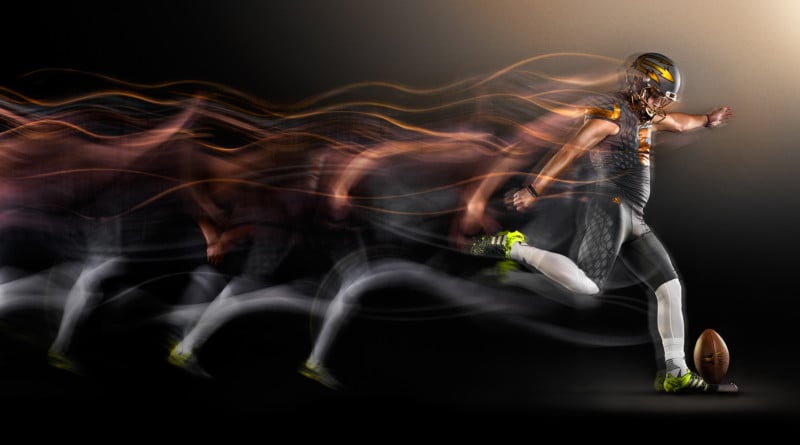 And finally, for this image of the football player kicking the ball, I had been listening to Moonlight Sonata (1st Movement) performed by E.S. Posthumus. I wanted a song that had a very distinct flow, interrupted by punches of drums and this one hit the mark. In many ways we wanted to show musically how I heard that song, through a visual composition of an athlete.

Whether you are a musician that sings about frame lines (I’m looking at you, Jack Johnson), a painter that conveys a harmony through your brush strokes, or someone that took way too many unsuccessful piano lessons — I challenge you to embrace the notion that all art is more than just an expression, but a feeling that can inspire further creation.