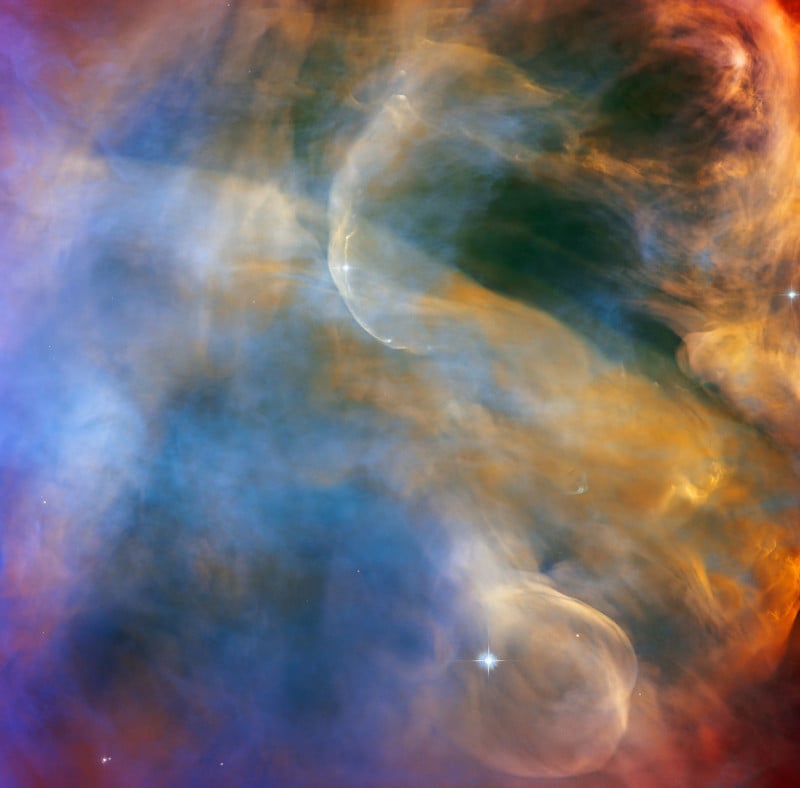 While the James Webb Space Telescope (JWST) has dominated headlines, the Hubble Space Telescope shouldn’t be forgotten. The legendary observatory recently captured this gorgeous photo that showcases the colors of the Orion Nebula.

Described as a celestial cloudscape, this region of the Orion Nebula surround the Herbig-Haro object HH 505. Herbig-Haro objects are bright patches of nebulas that are associated with newborn stars and are formed when jets of partially ionized gas are ejected by those new stars and collide with the nearby clouds of gas and dust.

“Herbig-Haro objects are luminous regions surrounding newborn stars that form when stellar winds or jets of gas spew from these infant stars creating shockwaves that collide with nearby gas and dust at high speeds,” the European Space Agency (ESA) explains.

“In the case of HH 505, these outflows originate from the star IX Ori, which lies on the outskirts of the Orion Nebula around 1,000 light-years from Earth. The outflows themselves are visible as gracefully curving structures at the top and bottom of this image. Their interaction with the large-scale flow of gas and dust from the core of the nebula distorts them into sinuous curves.”

The photo above was captured with Hubble’s Advanced Camera for Surveys (ACS) by scientists who are studying the region, specifically looking at the properties of outflows and protoplanetary disks, NASA explains. The space agency says that scientists study this region of space because the Orion Nebula is full of intense ultraviolet radiation that eminates from young stars. Hubble, in particular, is well suited to study this because of its sensitivity to that wavelength of light.

“The Orion Nebula is a dynamic region of dust and gas where thousands of stars are forming. It is the closest region of massive star formation to Earth, making it one of the most scrutinized areas of the night sky and often a target for Hubble,” the ESA says.

“This observation was also part of a spellbinding Hubble mosaic of the Orion Nebula, which combined 520 ACS images in five different colors to create the sharpest view ever taken of the region.”

Nebulas are some of the most beautiful celestial subjects that both Hubble and the JWST photograph. One of the JWST’s first photos was of the Carina Nebula which showcased some incredible detail and proved to be the most popular of the new telescope’s first images thanks to its stunning colors.