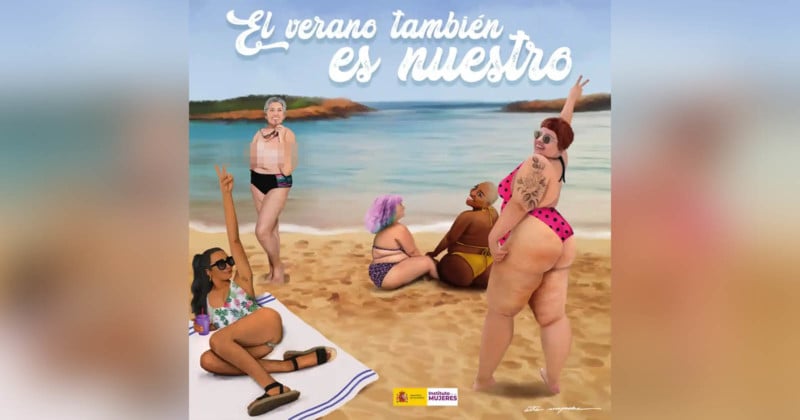 Spanish authorities have found themselves in hot water after publishing photos of five British women in an advertisement without prior permission.

The advertisement in question was a “beach body” campaign showing five women of differing body shapes and sizes at the beach. The text translates to “Summer is ours too. Enjoy it how, where and with whomever you want.”

However, Spain’s equality ministry reportedly did not get permission from the women to run the photos before publishing them and some of them have since spoken out about how unhappy they are.

Sian Green-Lord, who lost her leg after being struck by a taxi in New York City, tells The Guardian that she is so angry that she is “literally shaking.”

“It’s one thing using my image without my permission, but it’s another thing editing my body, my body with my prosthetic leg. I don’t even know what to say but it’s beyond wrong.”

Despite the campaign’s good intention as “a response to fatphobia, hatred, and the questioning of non-normative bodies,” Green-Lord isn’t the only woman in the ad to come forward with another British model, Nyome Nicholas-Williams, coming forward to say she only found out about the advertisement when it was sent to her via an Instagram follower.

“It was nice to see the image initially, but then I saw that it was for a campaign and I then felt annoyed as I hadn’t been asked to even be a part of this,” she tells The Guardian.

The Spanish government responded to the consternation by telling the BBC: “We would like to make it clear that at no point was it aware that the women in the images were actual real people.

“The work contracted was for an illustration without the use of any models.

“Therefore, the Women’s Institute, as a concerned party, has been in touch with the models to clarify the situation, and is waiting for the illustrator and the models to reach an agreement.”

Green-Lord, whose prosthetic leg was edited out of the image, says she’s “not buying it, at all.”

While Nicholas-Williams says that it just felt as if the Spanish authorities are “shifting the blame onto the illustrator.”

“The campaign could have been great if they invited us to Spain, did the photoshoot, and paid us but they decided to put my head on someone else and erase Sian’s leg,” she tells the BBC.

A third woman, cancer survivor Juliet FitzPatrick who has had a mastectomy, thinks a character from the image is based on one of her pictures.

The campaign’s creator Arte Mapache has issued an apology and says the controversy over the image is justified.

“I have decided that the best way to make amends for the damages that may have resulted from my actions is to share out the money I received for the work and give equal parts to the people in the poster,” the artist says.