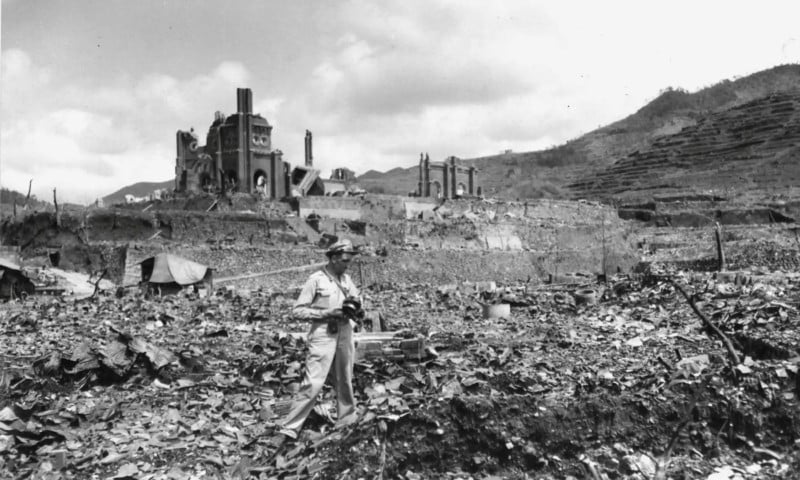 Lieutenant Dan McGovern stands amid the wreckage in Nagasaki, Japan at precisely the spot an atomic bomb had landed a month earlier. McGovern has a camera in hand, documenting one of the 20th century’s most significant events.

McGovern was a cameraman for the U.S. Strategic Bombing Survey that studied the impact of bombs. On September 9, 1945, he went to Nagasaki to document ground zero. There the airman found the realities of nuclear war, which included skulls and bones, teenagers suffering from radiation sickness, and a city in ruin. When he arrived back in the United States, he made secret copies of the footage so it wasn’t suppressed by authorities.

Many years later a 1967 U.S. Congressional committee that included Robert Kennedy asked to see the atomic bomb footage. The material had been declassified but no one could find the originals. McGovern, by now a lieutenant colonel, directed the authorities to his copies.

McGovern’s clandestine copies shocked the world. In 1970 the general public got its first viewing of the footage that has been used in a film called Hiroshima Nagasaki – August 1945. When it premiered at New York’s Museum of Modern Art a packed auditorium was stunned into silence by what they witnessed.

McGovern had a habit of being present at some of the 20th century’s most historical events, reports The Guardian.

McGovern was born in County Monaghan and witnessed Ireland’s war of independence that rid the British from the majority of the country. His family moved to the U.S. where he joined the artistic wing of the air force.

As part of the First Motion Picture Unit, he became a photographer for President Roosevelt and even setup an air force camera training school in Hollywood where he rubbed shoulders with future president Ronald Reagan and actor Clark Gable.

However, his magnum opus came when he took still images and filmed the area around Nagasaki. Author Joe McCabe has pieced together a biography of his life, Rebels To Reels, and McCabe was told by McGovern that the entire city looked as if a “massive anvil” had flattened it.

“Hundreds of kids had been sucked out through the windows. We were always finding bones.”

He also filmed inside a hospital where he encountered a 16-year-old boy named Sumiteru Taniguchi: “His whole back just looked like a bowl of bubbling tomatoes.”

Rebels to Reels – A biography of Combat Cameraman Daniel A. McGovern USAF is available at all book stores now.