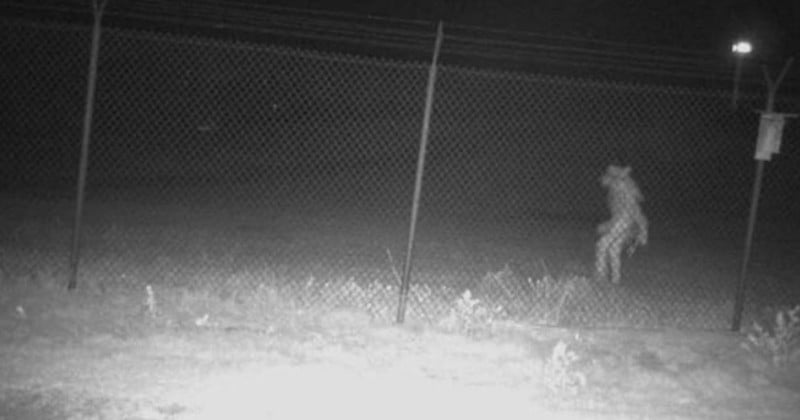 A mysterious image of a strange unidentified creature taken outside of Amarillo Zoo in Texas has left city officials and internet users baffled.

The City of Amarillo has appealed for help after security cameras picked up the unsettling figure apparently walking around the perimeter fence of the zoo in the early hours of May 21.

The camera that took the photo is motion-activated and sends an alert to zoo officials when it makes a capture. The model is believed to be a SPYPOINT Link-Micro-S-LTE.

The Amarillo Zoo captured a strange image outside the zoo in the dark and early morning hours of May 21 (around 1:25 a.m.). Is it a person with a strange hat who likes to walk at night? A chupacabra? Do you have any ideas of what this UAO- Unidentified Amarillo Object could be? pic.twitter.com/86Ly9ogtBT

“Was it a person with a strange hat who likes to walk at night? A large coyote on its hind legs? A Chupacabra? It is a mystery — for Amarillo to help solve,” writes the City of Amarillo.

The City has dubbed the confusing creature an Unidentified Amarillo Object (UAO) and has asked the public to help solve the enigma.

“We just want to let the Amarillo community have some fun with this,” says City of Amarillo Director of Parks and Recreation Michael Kashuba.

“It is definitely a strange and interesting image. Maybe Amarillo can help solve the mystery of our UAO.”

The Internet Throws in Its Two Cents

When the City of Amarillo first tweeted out the image they suggested it could be a “person with a strange hat who likes to walk at night,” or even a “chupacabra,” which is a folklore creature said to have vampirish tendencies that likes to attack and drink the blood of a goat.

Twitter users have predictably piled on with whacky theories such as suggesting that the creature is Fantastic Mr. Fox to Rocket Racoon from Guardians of the Galaxy.

Is this guy on the loose? pic.twitter.com/kLelqLYsBb

Dog Soldiers called and want their werewolf back. pic.twitter.com/E14bSilIhO

My guess would be Coyote jumping the fence rotated a bit right of being directly facing the camera. It’s probably blurry compared to the surrounds due to the speed of the coyote mid jump and the low light/ exposure time the camera has. pic.twitter.com/3uFjCQXG6l

“It could be a raccoon standing on its hind legs or potentially a person walking through the park that just happened to get captured in a peculiar way,” says Kashuba on CNN.

While the City of Amarillo rep’s guesses were reasonable, the public was more inclined to say it was Sonic the Hedgehog, the San Antonio Spurs Kayota Mascot, or even a werewolf.