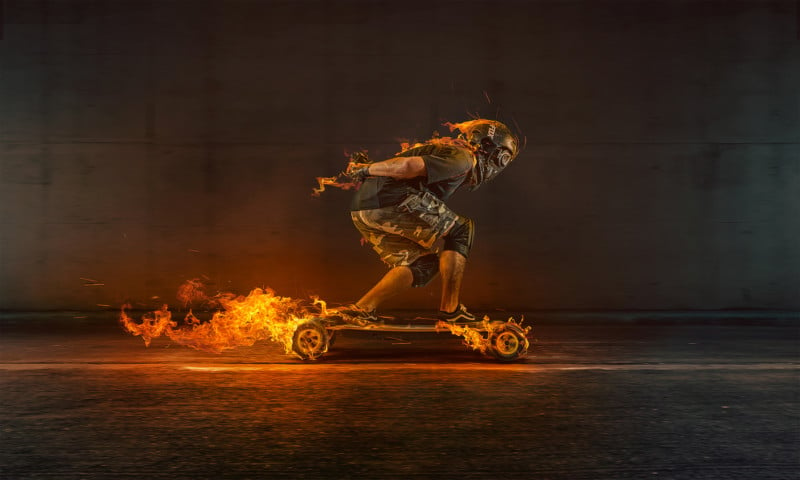 For photographer and art director Christopher Dormoy, combining electric skateboarding and futuristic photography editing evokes the same feelings he enjoys during his rides — freedom and excitement.

Born in New York, Dormoy grew up in an idyllic setting in Switzerland, which inspired him to pursue a creative career in design. He earned a master’s degree which kickstarted his career as a designer in a print studio and agency.

Later on, he built experience as an art director through projects for Cirque du Soleil, MGM, Eidos, and others. Dormoy eventually made a more permanent move to the gaming universe and joined Ubisoft ten years ago where he got to work on the well-known shooter game Rainbow Six Siege. His latest career change led him to Amazon Games as a brand art director, but photography has also played a role in shaping Dormoy’s creative career, helping him develop skills in design and identity. 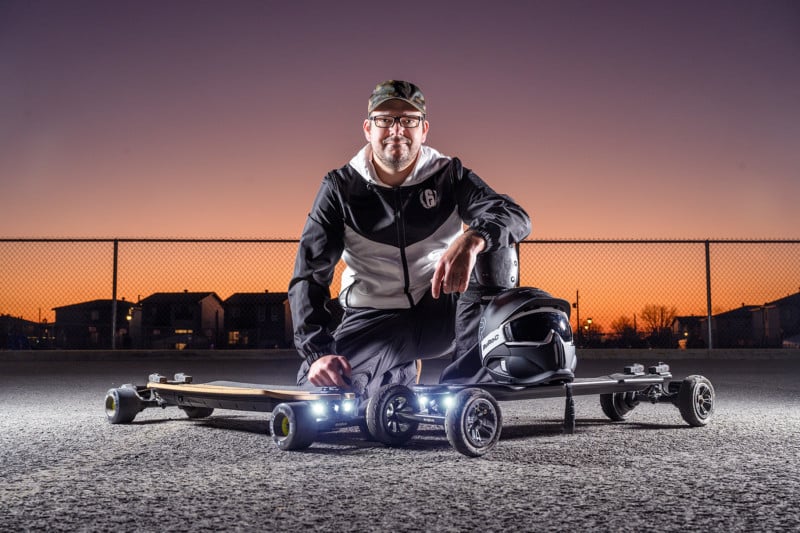 “Digital photography is my main activity and expertise in several domains as video games, movies, and events campaigns,” Dormoy tells PetaPixel. “Added to this artistic passion, I recently developed an attraction to electric skateboarding which occupies a good part of my time during the summer. This activity was born from the fact that I needed soft and fluid movements for video shooting.” 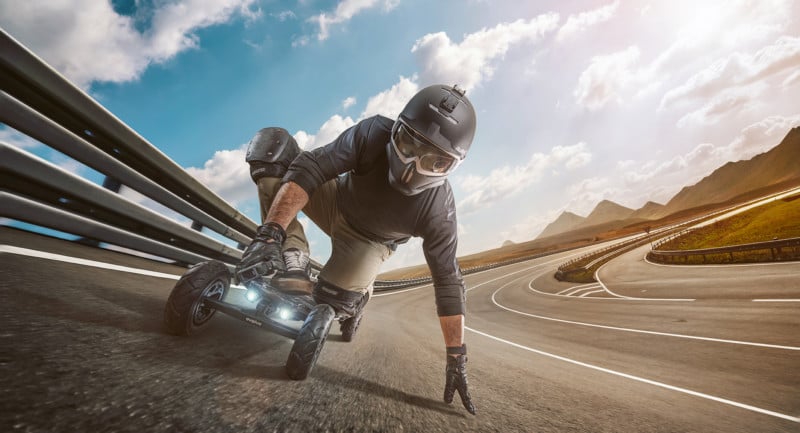 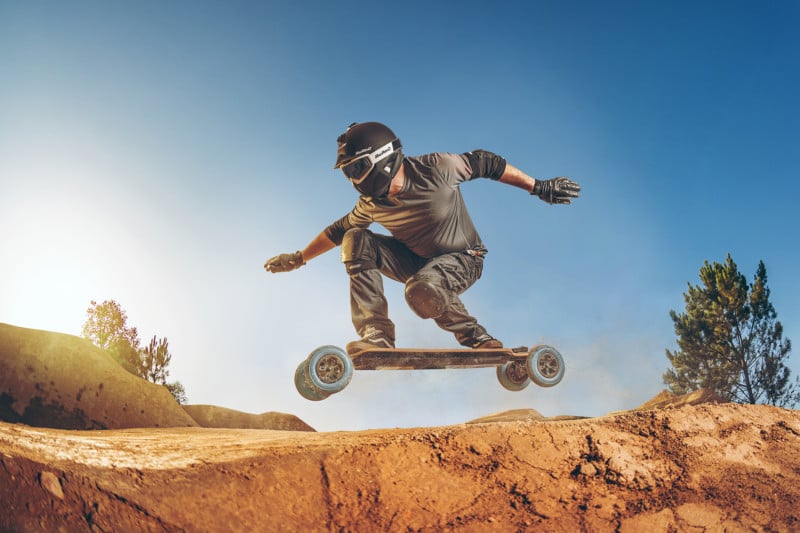 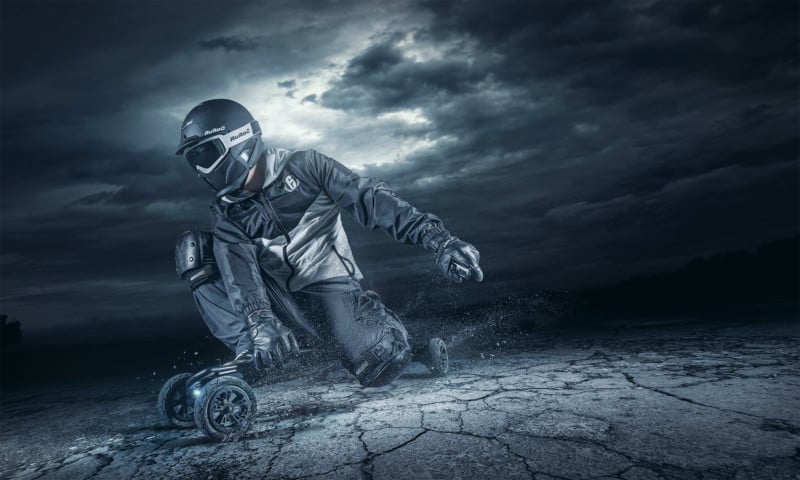 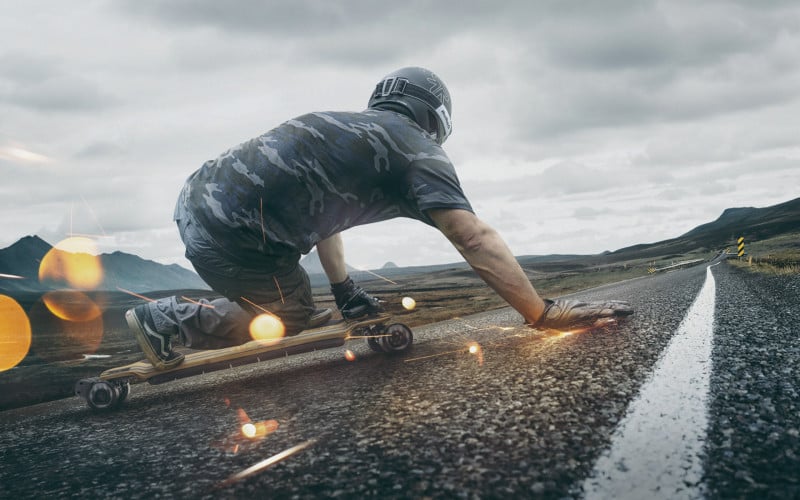 Electric skateboarding allows the rider to control the speed using a wireless hand-held remote or by shifting the rider’s body weight between front and rear for forward motion and braking, respectively.

“Riding an electric skateboard is a fantastic feeling of liberty mainly for those who know well snowboard,” Dormoy explains. “The fact we can ride, carve, slide… for a long time and pretty much everywhere is fantastic.”

After becoming involved in the electronic skateboarding community, Dormoy immediately got the idea of creating photos for the Evolve Skateboards brand, a well-recognized and respected company in the market.

Dormoy wanted to convey the thrill of being on an electronic skateboard so the images had to have energy and dynamics. This meant adding extra creative effects and light play to reinforce the story or the scene. 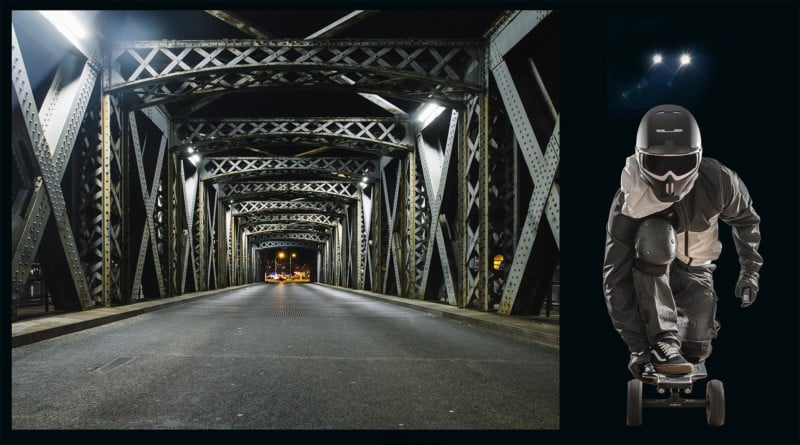 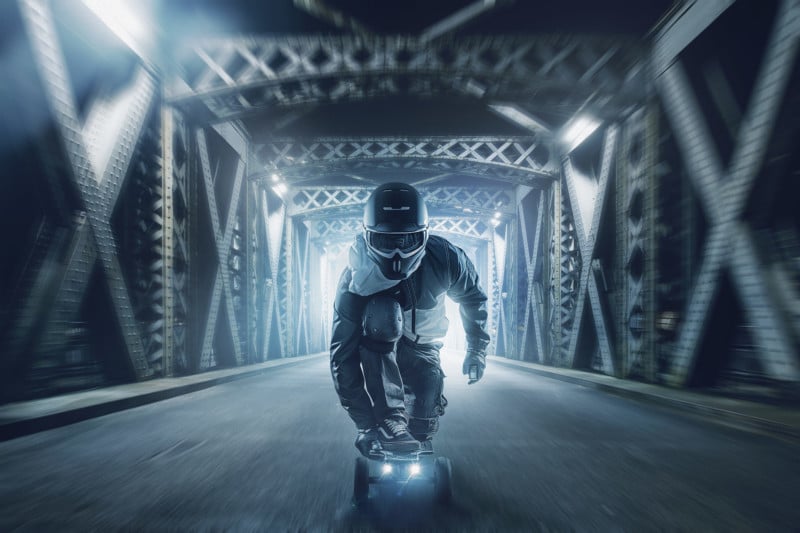 For backgrounds, Dormoy uses a variety of sources, like his own vast collection of photos or stock images. The same goes for special effects added to the composite, like smoke, dust, powder, and others. 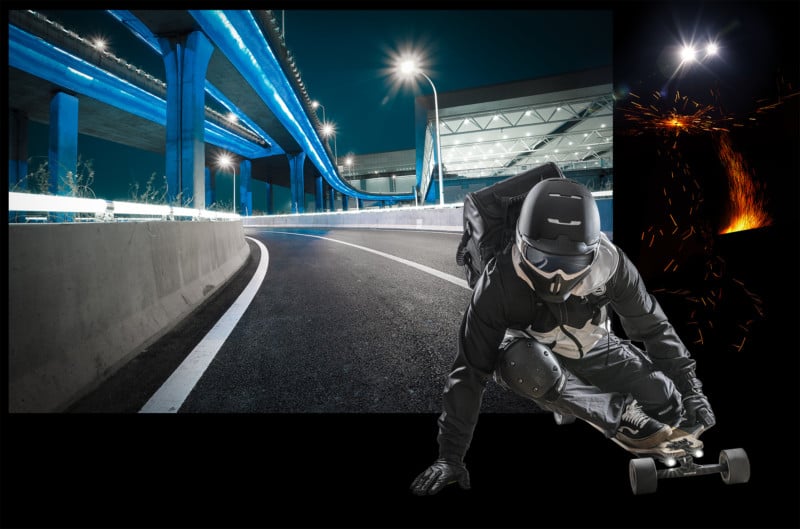 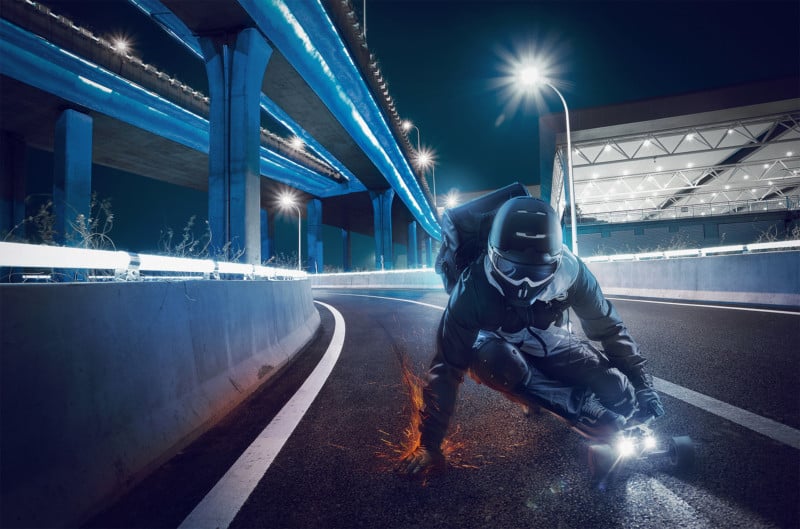 “Photoshop is my favorite tool as there is no limit to creativity and way to produce a vision,” Dormoy explains. “I play a lot with different brushes to create effect and the best merge between mixed images.”

It can take anywhere between one to ten hours to fully finish each composite, depending on the complexity of the composition and the desired visual effects. Dormoy’s workflow is flexible — his creative finish often depends on his mood and the source of his inspiration which may come from a new move or position he discovered on his skateboard. 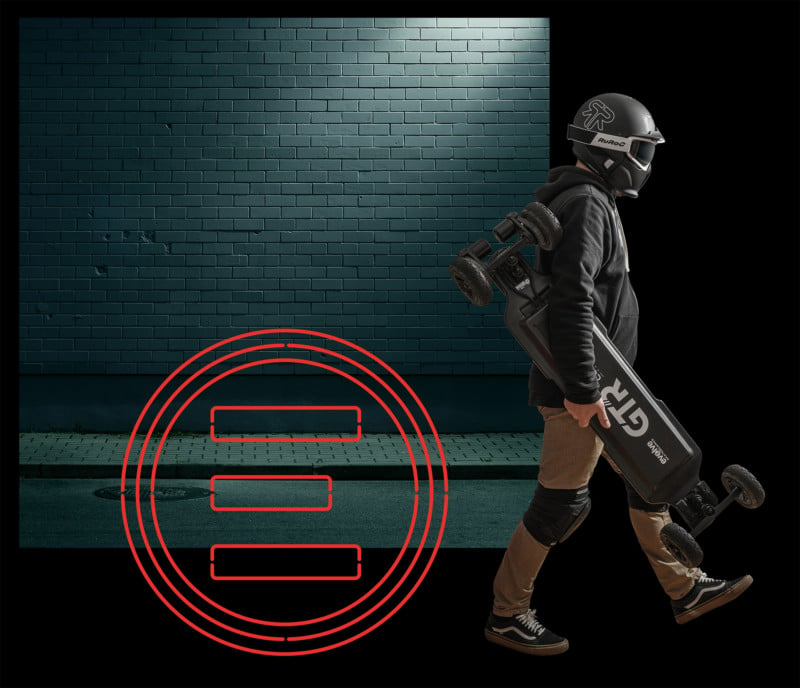 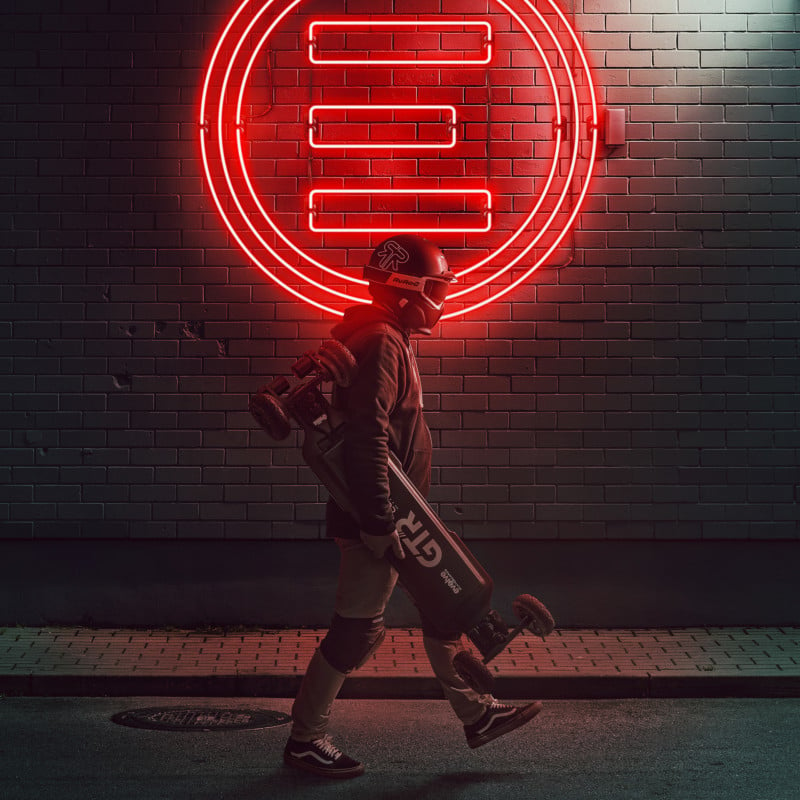 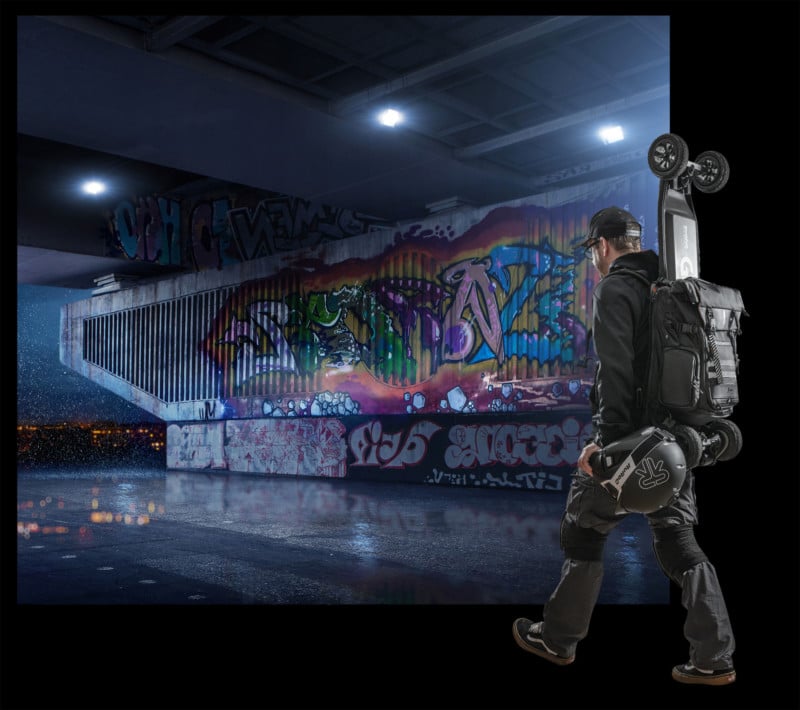 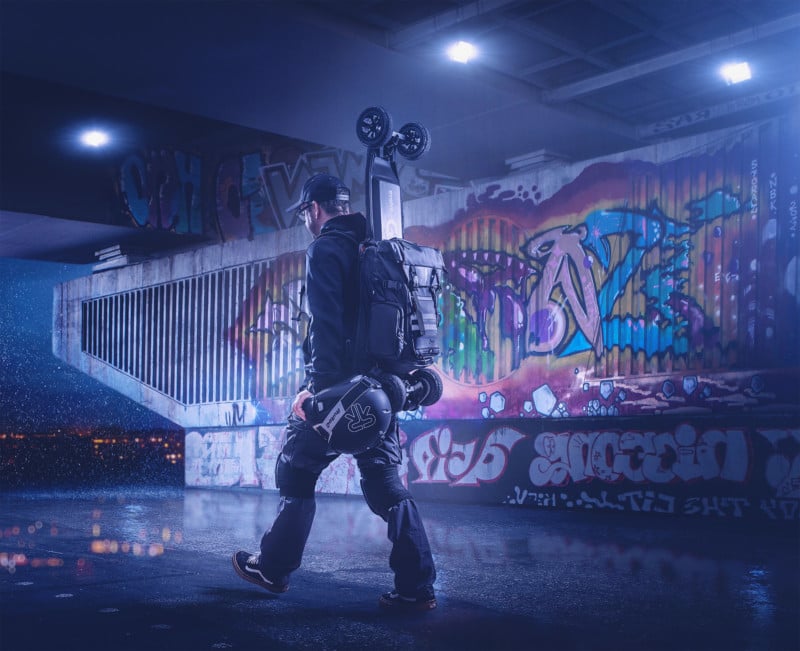 If he includes himself in the photos, Dormoy shoots in his studio, using a camera remote control. Working in a controlled environment helps Dormoy adjust all aspects of lighting to make sure they are fit for the scene. For photos that require action and movement, he shoots outside during the night with portable speed lights. 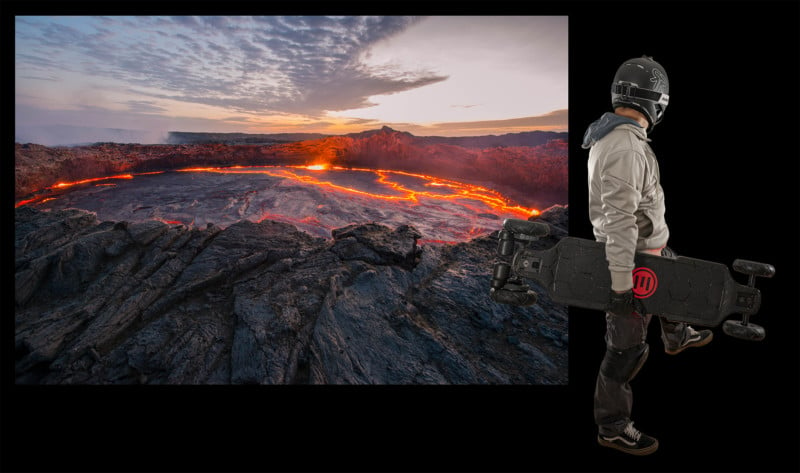 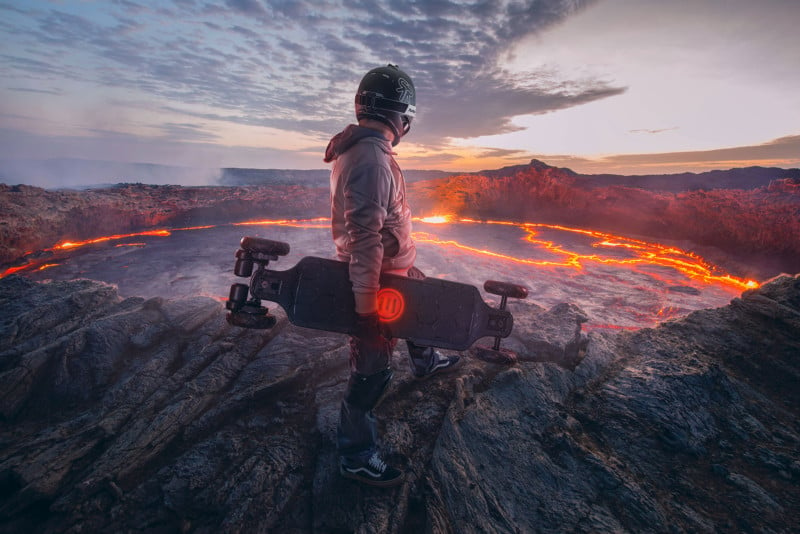 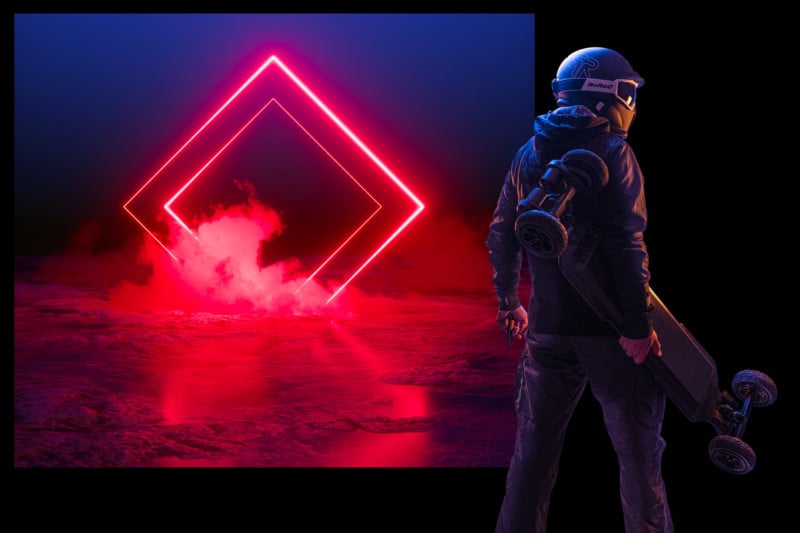 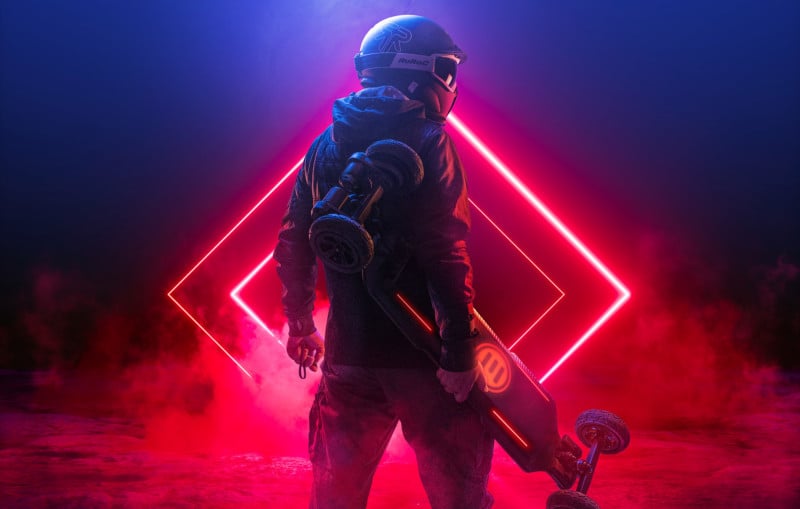 It’s not always an easy task to shoot such high-energy shots by himself, though. Dormoy has to balance having the skateboard remote in one hand and the camera remote in the other, which often results in losing balance and falling.

Despite all the difficulties, Dormoy continues to find joy in challenging himself creatively and combining his two passions in life — adrenaline-filled electronic skateboarding and photography with its endless possibilities.