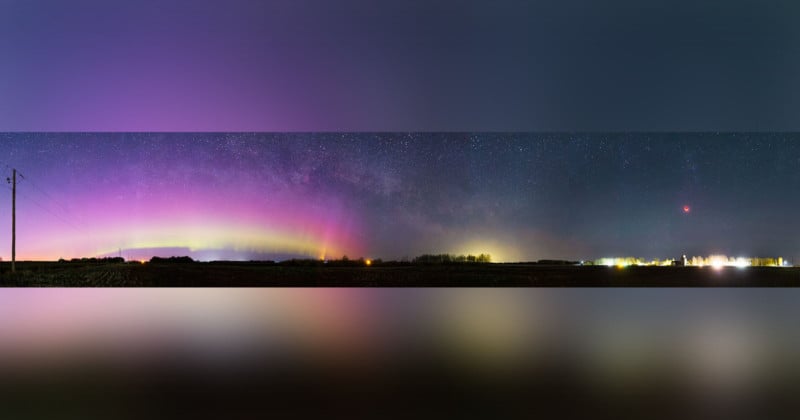 Photographer Justin Anderson shot a trio of gorgeous celestial elements together. During the total lunar eclipse, he was able to capture the Blood Moon, aurora, and the Milky Way galaxy together in one stunning panorama.

While Anderson only picked up his first camera five years ago, he immediately found himself drawn to wide landscapes and the beauty of the sky. His original subjects were storms rolling through the prairies near his home in Southern Manitoba, Canada, but in 2019 he captured a huge geomagnetic storm and found himself hooked on the night sky.

“When I started to get involved with Facebook communities I realized how helpful they can be for someone who doesn’t understand this phenomenon. I found people would constantly ask me if I went to Iceland or Alaska for my photos, meanwhile they were taken 10 minutes outside of my hometown,” Anderson tells PetaPixel.

“People wanted me to alert them privately when they were out, so with the help of my friend Ryan Lucenkiw we decided to create Manitoba Aurora and Astronomy. We are a community filled with like-minded individuals, with one goal in mind: Making the night sky more accessible for Manitobans!”

Over the last few years, the aurora community in Manitoba has grown to more than 40,000 members, and Anderson chases the aurora full time. Anderson is also an ambassador for a NASA-funded project called Aurorasaurus, which helps to study the aurora.

One week before the lunar eclipse, Anderson says he was speaking to members of his community about his desire to shoot the aurora during totality. He says he was really interested in capturing both an aurora and the eclipse in one image, bur realized it wasn’t likely.

“When I was planning a location I only ventured 15 minutes from my house,” he says. “I planned to photograph the moon over a grain elevator in a small community. I did not think about a northern view because the chances of aurora were quite low.”

The night of the eclipse, Anderson got to his vantage point northwest of the elevator and set up his cameras. 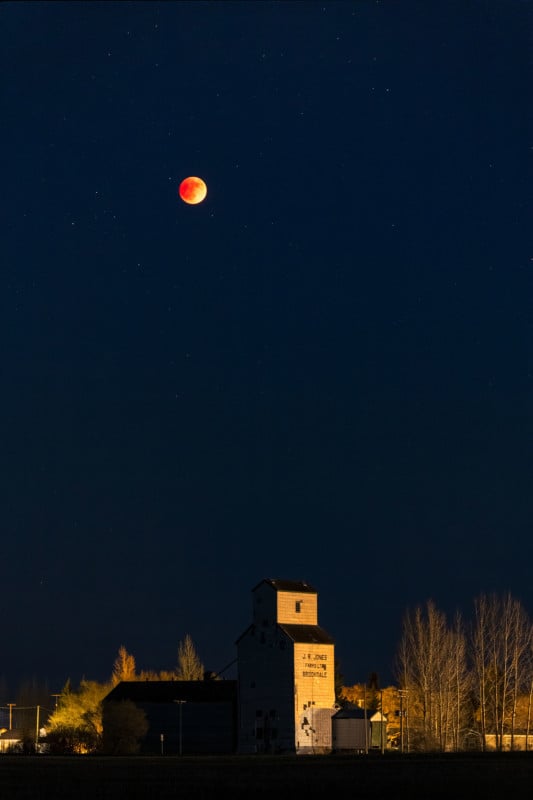 “While I was watching the eclipse I looked to the north, where the sun was still setting and I could see some faint dancing on the horizon. Being a full-time chaser, I knew immediately it was the aurora low on the horizon.

“I grabbed my Sony Alpha 7S II and Samyang 24mm f/1.4 lens and set it up facing north in hopes of catching a timelapse of the Sun setting and aurora dancing,” he explains.

“As the sky continued to get darker thanks to the Sun setting and the Moon eclipsing, the aurora started to strengthen until it was 30 to 40-degrees above the horizon. At this time I ran to my vehicle and grabbed a Canon 50mm f/1.8 lens, the cheapest lens you can get from Canon, and put it on my Canon 6D and shot from left to right, capturing as much of the aurora as possible then panning across to the Milky Way then the eclipse,” Anderson recalls. 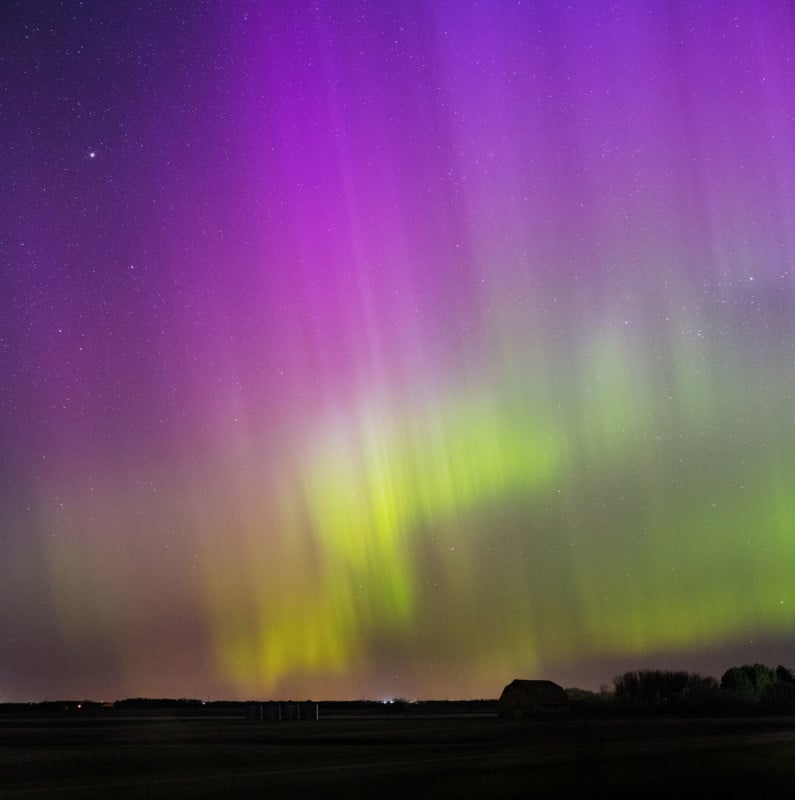 “When I got to the eclipse, I changed the settings so the Moon was not overexposed, giving me an HDR-like image simply for the Moon. At this point, the aurora really started dancing with plenty of purple and blue, so I changed gears and put on a wide-angle lens so I can capture as much of the show as possible.”

While Anderson says he was hopeful that he would capture the aurora and the eclipse together, the event actually happening still surprised him. Not only that, he was able to add the vastness of the Milky Way into the photo, which revealed itself once totality was reached.

“I did not anticipate capturing the aurora during the eclipse, it was more of a happy coincidence,” he says. “However, when I decided to photograph the panorama that is exactly what I was going for. A photo that showed the view from my vantage point with all three elements.” 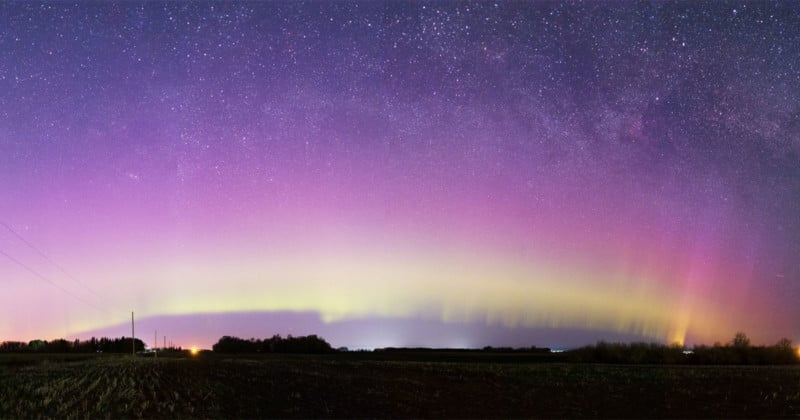 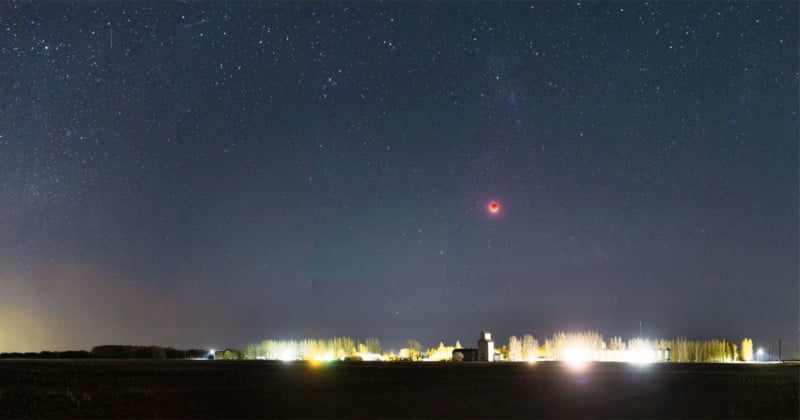 In an unusual twist, Anderson recently realized that as much as he loves the aurora, he actually has never seen it the way most people do.

“In February of 2022, I learned that I am partially color blind. The green cones in my eyes pick up more red rather than green, therefore green is more grey to me,” he explains.

“I can still see green, however, it is as if someone desaturated the green channel (to about -40). Since I started chasing the aurora I knew I could not see the green in the northern lights in person. While I can see the purples, reds, pinks, and blues, the green has always just been grey to my eye. The photos I produce often just look greyish green to me, while other people say the green is very saturated.”

Anderson says that when he’s out chasing the aurora, it often just looks like a cloud to him.

“Thankfully I chase the aurora full time so I have trained my eye to distinguish the aurora from a cloud, but it can still be difficult at times.”