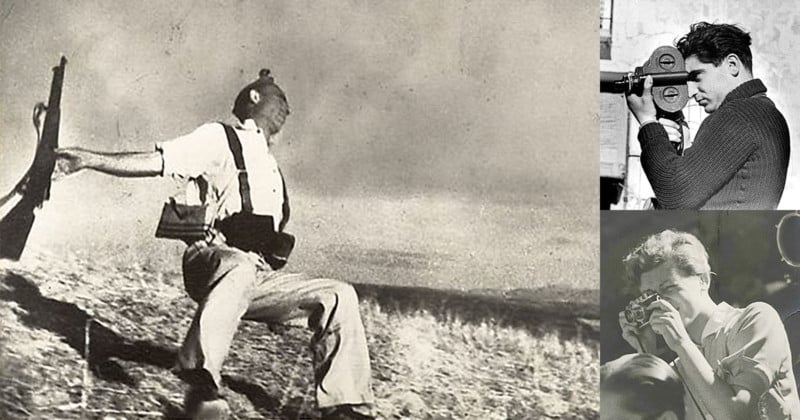 The Falling Soldier is one of the most famous war photos ever made, but questions have swirled for many years regarding its authenticity as evidence that it was staged has piled up. In my own research into the photo, however, a new question came up: the photo is attributed to renowned war photographer Robert Capa, but could it actually have been captured by his partner, Gerda Taro?


The full title of the iconic photograph is Loyalist Militiaman at the Moment of Death, Cerro Muriano, September 5, 1936, and the black-and-white photo was said to have been captured by Capa during the Battle of Cerro Muriano in the Spanish Civil War. It’s a photo that purportedly depicts the moment a Republican Iberian Federation of Libertarian Youth (FIJL) soldier is killed after being fatally shot in the head by the enemy.

After being published around the world, the photo went on to become Capa’s most famous work and one that caused the British magazine Picture Post to call the then-25-year-old photojournalist “the greatest war photographer in the world” in 1938. He is still widely considered to be the greatest combat photographer in history.

The Original Versions of The Falling Soldier

The original publication of the photo in the French pictorial magazine VU showed the Falling Soldier along with another photograph from the same sequence. This sequence of shots was never published together again.

The Falling Soldier was also published in LIFE magazine.

Notice how the horizon of the famous Falling Soldier photo has been slightly adjusted compared to the picture underneath it in the VU publication. You can see this most clearly in the mountain range in the distance.

I readjusted the Falling Soldier picture to match the horizon of the picture below it.

The identical background of the two photos suggests the camera was either mounted on a tripod or at the very least held secure.

In the second VU picture you can clearly see two distracting white objects on the left side of the frame. Possibly markers. 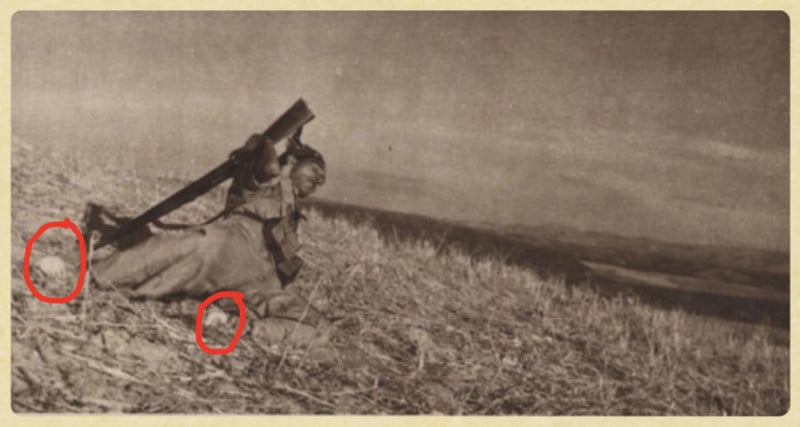 The crop points on the left and bottom of the Falling Soldier picture correspond to these markers.

To get some sense of the original frame size, I super-imposed the crop from LIFE magazine over the photos from VU.

Was the Photo Captured on Medium Format?

Interestingly, the frame size is an almost perfect match for a medium format camera. 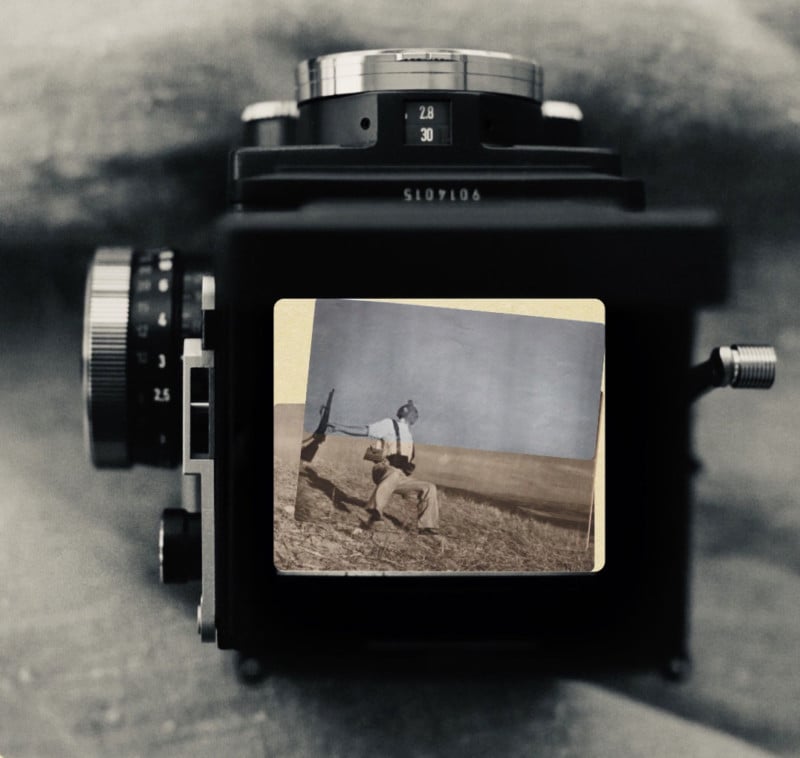 At the time the famous photograph was taken, Robert Capa was using a 35mm Leica; his partner, photographer Gerda Taro, however, was shooting on a medium-format Rolleicord. 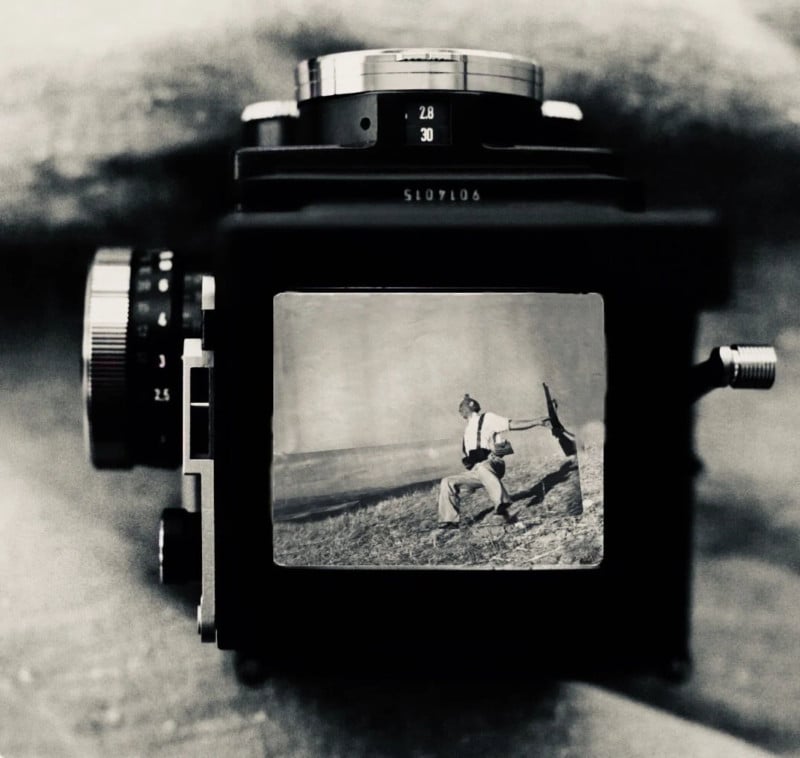 Here is a comparison of the superimposed photos with a medium format frame and a 35mm frame. 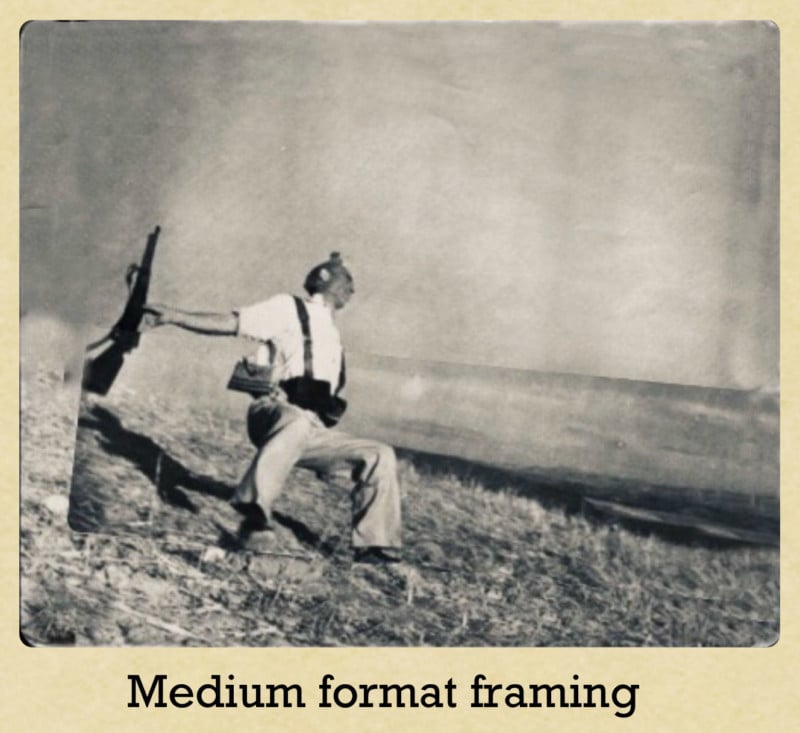 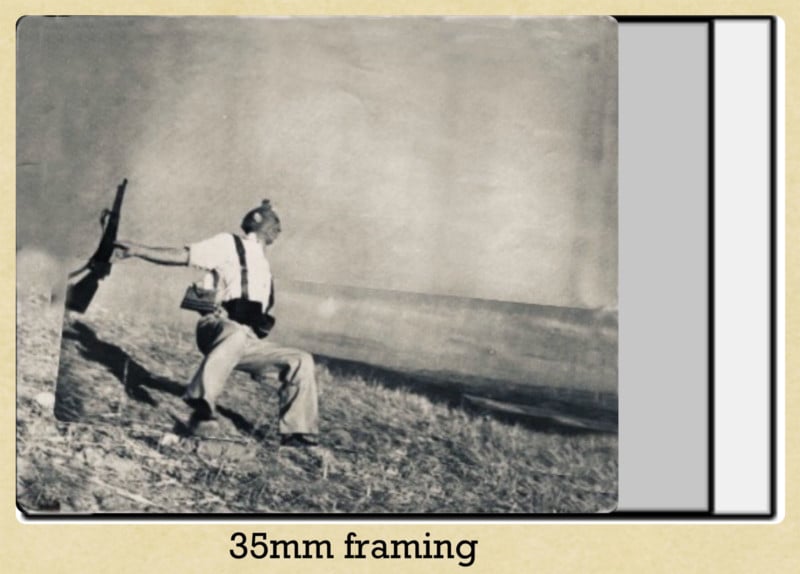 Was Gerda Taro the Photographer Behind the Iconic Shot?

There is already strong evidence that Capa staged his iconic Falling Solider photo and that it does not show the death of a soldier in the middle of a battle, but is it possible that Capa was not even the photographer behind the shot at all? Was photographer Gerda Taro actually responsible for the famous Falling Soldier picture?

Robert Capa and Gerda Taro were born Endre Ernő Friedmann and Gerta Pohorylle, respectively, to Jewish families. Friedmann had difficulty finding work with his real name due to increasing religious and political intolerance in Europe, so he came up a new name.

“[…] I figured, that something like Robert would sound very American because that was how somebody had to sound, and figured Capa again sounding as American or something, and figured it is easy to pronounce, so Bob Capa sounded like a good name to me,” Capa said in a 1947 radio interview, “and then I invented that Bob Capa was a famous American photographer who came over to Europe and did not wanted to bother with the French editors, because they didn’t pay enough.”

After developing romantic and professional relationships, Capa and Pohorylle began to sell their photos collectively under the alias Robert Capa prior to Pohorylle adopting her professional name of Gerda Taro and publishing her work independently.

The rediscovery of the Mexican Suitcase in the 2000s revealed that photos that had long been attributed to Capa were actually captured by Taro, who helped invent the legend of Robert Capa and sell his photos in the American market. Therefore, it seems entirely plausible that one of Capa’s most career-defining photos may have actually been captured by Taro as well.

I am personally a huge fan of Capa despite my personal theories. Whether the famous photo was faked or not it does not detract from him being my second favorite photographer (after Marketa Luskacova) and the grandfather of all combat photographers.

About the author: Hassan Amini is a veteran photographer and filmmaker. After covering the conflicts in Yugoslavia, Liberia, and Somalia in the 90s as a photographer for the AP, Hassan switched to filmmaking. His documentary “Decadence and Downfall: The Shah of Iran’s Ultimate Party” was nominated for a Grierson Award in 2016. He has been a Capa/Taro obsessive for the past thirty years.