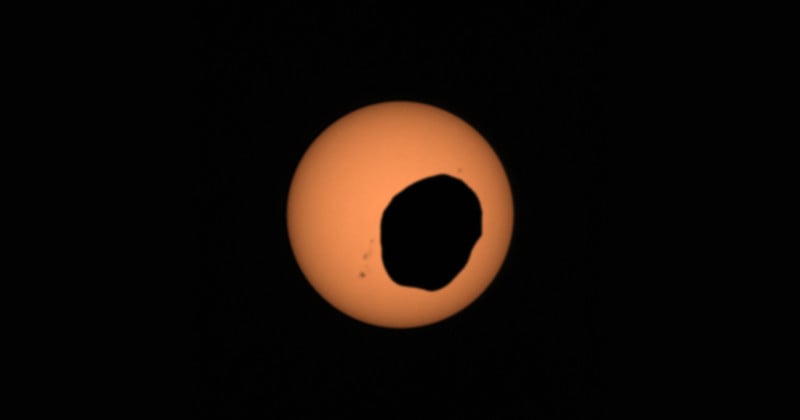 The Mars Perseverance rover has captured detailed footage of Phobos, one of the Red Planet’s moons, crossing the face of the Sun. It is the most zoomed-in, highest frame-rate observation of a Phobos solar eclipse taken from the Martian surface.

Several mars rovers have observed Phobos crossing the front of the Sun over the years. Spirit and Opportunity made the first observations back in 2004, but Curiosity was the first to record video of the event in 2019 (the rover also shot photos of an eclipse in 2013).

But thanks to the high-resolution camera of the Perseverance’s Mastcam-Z camera system, NASA scientists are getting the highest frame rate and most zoomed-in look ever. Scientists were prepared for better results from Perseverance because of the much better camera system, but the quality of the footage was still surprising.

“I knew it was going to be good, but I didn’t expect it to be this amazing,” Rachel Howson of Malin Space Science Systems in San Diego, one of the Mastcam-Z team members who operates the camera, says.

“It feels like a birthday or holiday when they arrive. You know what’s coming, but there is still an element of surprise when you get to see the final product.”

Perseverance’s camera also brings another element that makes its footage special: color. NASA explains that the Mastcam-Z has a solar filter that reduces light intensity, allowing scientists to see the details in the shape of Phobos’s shadow such as ridges and bumps in the landscape.

“You can also see sunspots. And it’s cool that you can see this eclipse exactly as the rover saw it from Mars,” says Mark Lemmon, a planetary astronomer with the Space Science Institute in Boulder, Colorado, who has orchestrated most of the Phobos observations by Mars rovers.

Scientific Benefits of the Observation

NASA explains that observations like this help them measure the subtle shifts in Phobos’s orbit over time.

“The moon’s tidal forces pull on the deep interior of the Red Planet, as well as its crust and mantle,” NASA’s Jet Propulsion Laboratory (JPL) explains. “Studying how much Phobos shifts over time reveals something about how resistant the crust and mantle are, and thus what kinds of materials they’re made of.”

This particular eclipse took place on April 2, the 397th Martian day of the mission, and only lasted 40 seconds which is significantly less time than a typical solar eclipse of Earth’s moon takes. Even though the entirety of Phobos passes over the Sun from the perspective of the Martian surface, “totality” as it would be expected for Earth’s moon doesn’t take place as Phobos is significantly smaller — 157 times smaller, to be exact. Mars’s other moon, Deimos, is even smaller.

It is only a matter of time before Phobos crashes into Mars. The moon is getting closer to the surface and is destined to fall into the planet, but it’s still going to be a while: tens of millions of years. NASA says that scientists have been able to refine their understanding of the moon’s death spiral thanks to the observations from the surface over the years.