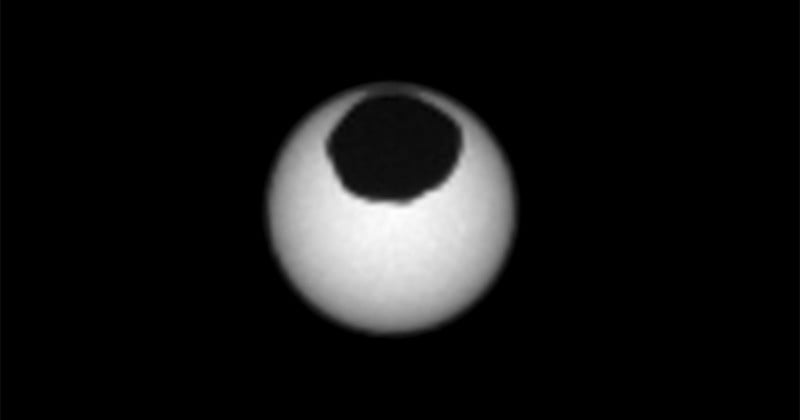 Photographers have captured many awe-inspiring photos of solar eclipses in recent years. But Earth isn’t the only planet photos are being shot from: NASA’s Curiosity rover has captured some beautiful solar eclipse photos over the past few weeks from the surface of Mars.

NASA writes that the special eclipse “glasses” used by Curiosity are the solar filters found on the rover’s Mast Camera (AKA the Mastcam). These filters allow it to shoot directly toward the Sun.

On March 17th, Curiosity captured the Martian moon Deimos (the smaller and further of the two Martian moons) crossing the Sun. Deimos measures just 1.5 miles across. Here’s the photo sequence turned into a time-lapse (sped up by a factor of 10):

“Deimos is small enough that scientists consider it a transit rather than an eclipse,” NASA states. “The Deimos transit lasted several minutes.”

When the larger moon Phobos (7 miles across) crossed the Sun on March 25th, Curiosity captured this sequence of photos showing the moon’s shadow sweep across the land and darken the sky. This has been sped up by a factor of 4:

“The image was taken after the Sun had descended behind the horizon, just as Phobos was rising and throwing its elongated shadow across the Martian surface,” NASA writes. “Dust particles in the atmosphere acted as a screen against which the shadow was projected.”

The next day, Curiosity captured a sequence of photos showing Phobos crossing in front of the Sun with the Mastcam (this is again sped up by a factor of 10):

“Solar eclipses have been seen many times by Curiosity and other rovers in the past,” NASA says. “Besides being cool – who doesn’t love an eclipse? – these events also serve a scientific purpose, helping researchers fine-tune their understanding of each moon’s orbit around Mars.”

Yashica is Launching Its Own 35mm Film, Photographers Groan