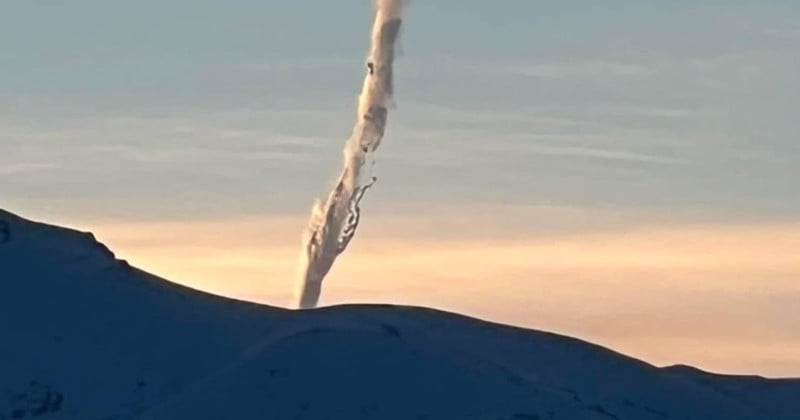 A strange, worm-like cloud that appeared over Alaska has sparked a social media frenzy and official law enforcement investigation. Conspiracy theories suggested everything from a UFO to a plane crash to a Russian missile attack.


On the morning of Thursday, April 7th, people in and near Lazy Mountain, Alaska, noticed a bizarre cloud formation streaking across the sky. Unlike a neat and straight airplane contrail — the line-shaped clouds seen across the sky caused by airplane engine exhaust or air pressure changes — what was seen on the horizon had streaks of “smoke” branching out in different directions, causing people to suspect it could be a meteor or fallen aircraft.

“I looked up and I saw this strange — I mean, I would just call it a smoke column,” Mattias Ahlvin of Palmer, Alaska, tells the Anchorage Daily News. “It was a dark, gray streak across the sky that was going straight vertical. It looked like it was going straight down.”

Photos captured by witnesses began appearing on Alaskan Facebook groups as people sought an explanation for what they were seeing.

“Looks like something from a Peter Jackson movie,” one person commented.

“Wow. Best shots of this mystery yet,” said another. “Looks like a meteor more so than a plane, but would a meteor make a large contrail like that? Baffling.”

“Certainly looks like 4 trails of smoke as if from aircraft engines,” suggested another.

The Bellingham Herald reports that as murmurings of a possible airplane crash spread, it attracted the attention of Alaska State Troopers and the Alaska Rescue Coordination Center. An investigation was launched into the cause of the mystery cloud.

After flying a helicopter around the area the cloud was spotted above, authorities released a statement with their official conclusions. 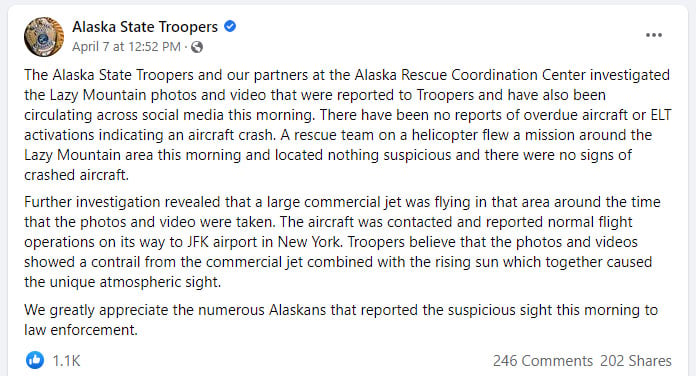 “The Alaska State Troopers and our partners at the Alaska Rescue Coordination Center investigated the Lazy Mountain photos and video that were reported to Troopers and have also been circulating across social media this morning,” the state police agency writes. “There have been no reports of overdue aircraft or ELT activations indicating an aircraft crash. A rescue team on a helicopter flew a mission around the Lazy Mountain area this morning and located nothing suspicious and there were no signs of crashed aircraft.”

The agency’s conclusion was that it was simply light from the sunrise illuminating a dissipating airplane contrail in such a way that it looked way more strange and ominous than it actually was.

“Further investigation revealed that a large commercial jet was flying in that area around the time that the photos and video were taken,” the statement continues. “The aircraft was contacted and reported normal flight operations on its way to JFK airport in New York. Troopers believe that the photos and videos showed a contrail from the commercial jet combined with the rising sun which together caused the unique atmospheric sight.”

While some conspiracy theorists online aren’t buying the official explanation, meteorologist Eddie Zingone of the National Weather Service in Anchorage agrees with the conclusion.

“First of all, how thick it is on one side — the bottom left part is much thicker, which is what we’d expect,” he tells the Anchorage Daily News, adding that there was a good deal of condensation that morning and that the airplane could have just passed through a cloud.

“It was just a very vivid contrail is the best that we can guess on that.”