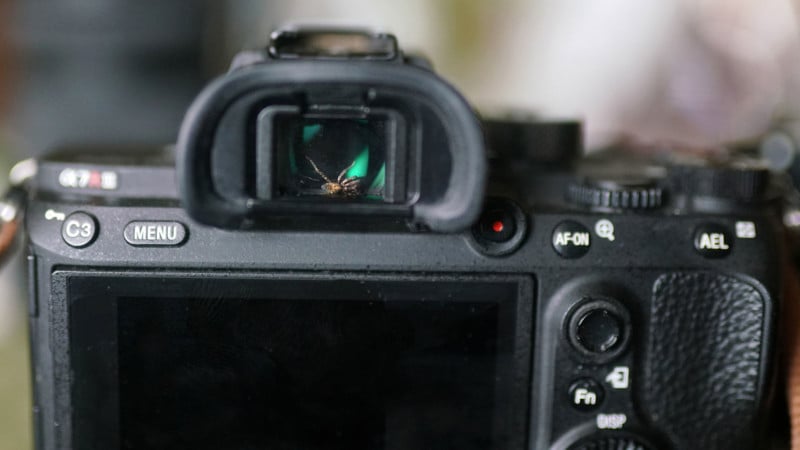 Imagine looking through your camera’s viewfinder, finding it strangely blurry, and then realizing that a fairly large spider had made its home inside… and that your eye had been just a fraction of an inch away from the eight-legged creature. That’s what happened recently to Canadian photographer Joel Robison.


Robison first purchased his Sony a7R III mirrorless camera brand new a little over half a year ago.

“I have used it frequently over the last 7 months, primarily in the UK and in British Columbia, Canada where I live,” Robison tells PetaPixel. “I wouldn’t say that I’ve been to any spider-heavy locations in that time frame but they are pretty sneaky little things.”

Something Blurry in the Viewfinder

He first noticed something off about his camera on March 8th.

“I was taking some photos inside the house when I noticed there was a bit of blur blocking the view through the viewfinder,” the photographer says. “I typically use the LCD screen to access my menu and to check focus but this time I was double-checking focus using the viewfinder when I saw that it was blocked.

“I thought, at first, it was a tiny bit of fluff or dust from inside my camera bag, but then it moved and I pulled my face away from the camera to see the spider pulling its legs out of view and tucking itself into the corner of the viewfinder, behind the glass.”

After the unsettling realization that his face had been uncomfortably close to the spider, Robison started looking into how the spider could have gotten into the viewfinder in the first place.

“I immediately started to Google ‘spider in my camera’ and from the very few results I found, most were dealing with a spider on the mirror or in other areas of the camera, not trapped behind glass in what should be a fairly spider-proof area,” he says. “From what I can guess, the spider may have been hiding inside one of my lenses and when I switched and connected the new lens to the camera body, it crawled out and into the camera maybe towards a bit of light?”

Removing a Spider from a Camera

Robison then spent about a week trying different ways to either get the spider to voluntarily leave the camera or forcefully evict it.

“I tried a few different things after posting my story in a photography group,” he says. “Some suggested leaving the lens off near an open door or window, as maybe the spider will move out and towards something warmer (no luck). I tried leaving the lens off next to a bright light, hoping it would vacate the dark camera for somewhere brighter, again no luck. I used an air puffer to try and blow air up into the area but it didn’t do anything either.”

Robison finally reached out to Sony directly to see what course of action the company would suggest.

“I finally connected with someone via Sony’s support chat, although their response was quite mild and didn’t seem surprised at all,” Robison says. “They suggested that I simply send it to their repair center for cleaning and servicing.

“I was hoping they’d have a little more insight into how a spider (and a fairly big one at that) could get into such a difficult location.”

Learning to Live with His New Friend

For now, Robison is just living with his new spider friend and waiting to see if it will find itself a new home soon — he is planning to send the camera in for “repair” if the spider ends up dying inside. And yes, Robison is still using the camera in the meantime.

“I’ve used [the camera] a few times over the last week,” he says. “It’s been a fairly entertaining predicament to be in.

“I’m not afraid of spiders (though it is a bit unsettling to put my eye directly up to it) and most of the replies I’ve had have ranged from complete panic to suggesting I light the camera on fire, throw it off a cliff, or a combination of the two.”

“Personally I’m waiting for a certain Superhero franchise to write a letter and welcome me into the multi-verse.”

Update on 3/28/22: After learning of Robison’s unusual situation, Sony shipped the photographer a box with a replacement spider-free camera and a special Spider-Man comic.