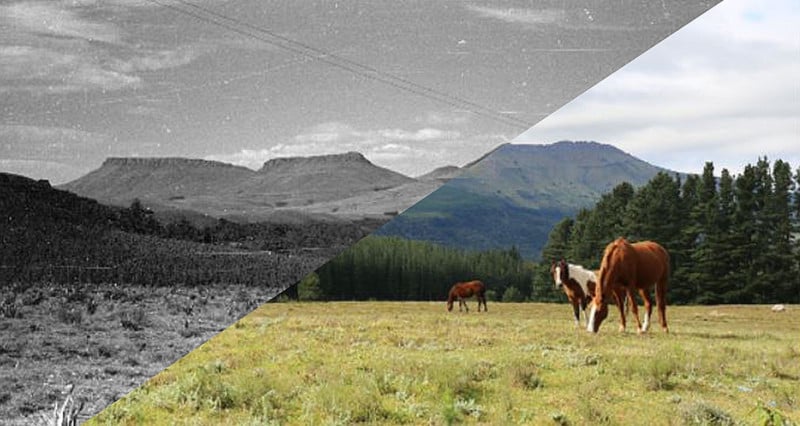 Every place in the world has a history. To understand it in the present you need some knowledge of its past. The history of the earth can be read from its rocks; the history of life, from the evolutionary histories and relationships of its species.


But what of the history of modern landscapes and the many benefits we derive from them, such as water and food? What are their histories – and how are they shifting in response to the intense pressures they face from climate change and from people?

Historical landscape photographs provide one way of measuring this. They capture the way things were at a moment in time. By standing at the same place and re-photographing the same scene, it is possible to document the nature of change. Sometimes researchers can even measure the extent and rate of change for different elements in the landscape.

Reasons for the change can also sometimes be observed from this and other historical information, such as the climate or fire record. All of these data can then be related to what has been written about environmental change using other approaches and models. Researchers can ascertain whether the environment has reached a critical threshold and consider how to respond to the changes.

This is what repeat photography is all about.

Repeat photography has been used to document vegetation change in Africa since the 1950s; in the last 30 years there’s been an explosion of interest. It is now used in various parts of the world, with a number of major projects in North America’s drylands, Ethiopia’s highlands and across the southern African region.

Historical landscape photographs have been matched with modern images and used to analyze changes in alpine glaciers, hydrology and soil erosion, and vegetation, including changes in the populations of long-lived desert succulents and savanna trees.

Repeat photography is increasingly being seen as an important tool for monitoring the impact of climate change on vulnerable species and threatened ecosystems.

Our work in southern Africa has produced more than 2,000 repeat photographs from all the major biomes in the region. In a recent synthesis of this work we provided a practical assessment of the impact of long-term climate and land use change for the African sub-continent. Contrary to expectations, we found that vegetation cover and biomass had increased at most locations in response to changes in land use, climate and CO₂.

Amassing such a large number of repeat photographs was the cumulative result of multiple research projects by many researchers over many years. Gaining a more holistic overview of the changes evident in southern Africa’s landscapes through repeat photography would require tremendous funding for travel, and of course, an amount of time that we do not have. That’s where citizen science comes in.

The rePhotoSA project was launched in August 2015. The idea is to involve interested members of the public in re-photographing historical locations. This has two benefits. First, participants add to the number of repeated images. Second, public awareness of landscape change is raised.

On the website, photographs are spatially referenced into a grid of quarter-degree squares (QDS; each approximately 28 x 25 km in size) to narrow down the possible locations of the historical photo sites. Users can browse photographs from the color-coded QDSes and download a high-resolution copy for printing, as well as a field data sheet in which metadata can be recorded. After repeating the photo, users must register with the project to upload their repeats to the website. We also have active Instagram and Facebook pages.

Between 2015 and 2020, more than 280 landscape photographs were repeated and uploaded by citizen scientists, mostly from around South Africa’s Cape Peninsula and the country’s eastern Karoo region.

Unsurprisingly, there is a higher density of repeats nearer to city centers. Some of the changes observed in these areas include increased urbanization and infrastructure such as power transmission lines, as well as the introduction or clearing of alien vegetation.

In more rural locations where urban expansion is less visible, we often see other ecologically interesting trends: increased woody vegetation cover – bush encroachment – and denudation of large areas as a result of fire or overgrazing.

There are some limitations on the consistency in the quality of data obtainable through citizen science projects. For instance, making inferences about the drivers of the changes observed partly depends on the quality of the repeat photograph and its associated metadata. But the benefits far outweigh the costs when the area from which data is required is so vast.

The project recently achieved an important milestone with the publication of a peer-reviewed article in which its activities are described. Bringing a South African repeat photography project into the international research arena and emphasizing the value of citizen science and open data are both significant contributions.

The project has also been cited in various research articles as an example of how photographs can illustrate vegetation change, suggesting its utility as a crowd-sourced, long-term monitoring project. As more photographic collections are curated and integrated into the website, we anticipate that the combined efforts of our citizen scientists and research teams will further aid in understanding how southern Africa’s landscapes are changing in response to human and climate pressures.

About the author: Timm Hoffman is a Professor and the Director of the Plant Conservation Unit at the University of Cape Town. Hana Petersen is project manager of rePhotoSA at the University of Cape Town. The opinions expressed in this article are solely those of the author. This article was originally published at The Conversation and is being republished under a Creative Commons license.