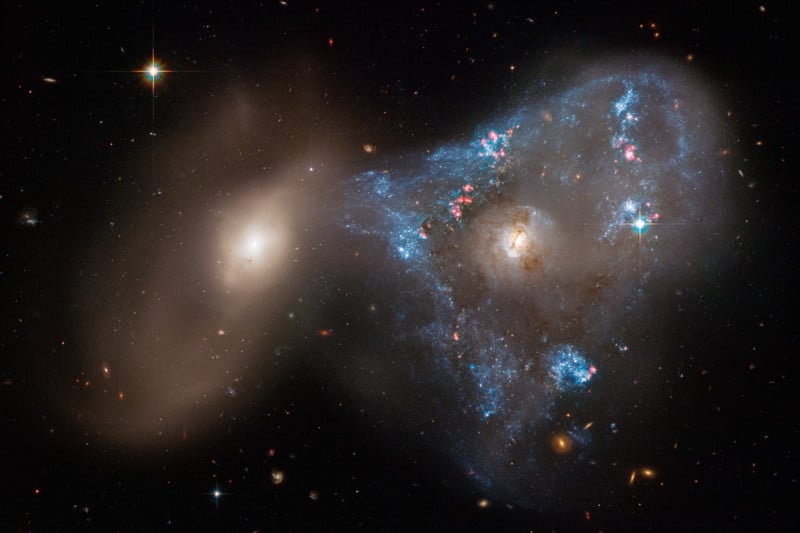 Hubble has captured a stunning photo of two interacting galaxies that likely passed through one another, which caused them to ignite in a “frenzy of starbirth.”

This head-on collision of galaxies has create an unusual “triangle-shaped star-birthing frenzy” of a galaxy duo collectively called Arp 143. The pair contains the extremely bright and what NASA describes as “glittery” spiral galaxy NGC 2445 on the right and its far less flashy companion NGC 2444 on the left.

NASA astronomers posit that the two galaxies passed through one another which ignited a unique and beautiful traingle shaped firestorm in NGC 2445 where thousands of stars are bursting to life thanks to an abundance gas that came as the result of the galaxies colliding. Despite its massive, beautiful eruption of star formation, it has yet to fully escape the gravity of NGC 2444. NASA says that the result is that the pair are waging a cosmic game of tug-of-war, which NGC 2444 appears to be winning as it has pulled gas from NGC 2445 which is the cause of the unusual triangle shape of the star formation.

“Simulations show that head-on collisions between two galaxies is one way of making rings of new stars,” astronomer Julianne Dalcanton of the Flatiron Institute’s Center for Computational Astrophysics in New York and the University of Washington in Seattle says.

“Therefore, rings of star formation are not uncommon. However, what’s weird about this system is that it’s a triangle of star formation. Part of the reason for that shape is that these galaxies are still so close to each other and NGC 2444 is still holding on to the other galaxy gravitationally. NGC 2444 may also have an invisible hot halo of gas that could help to pull NGC 2445’s gas away from its nucleus. So they’re not completely free of each other yet, and their unusual interaction is distorting the ring into this triangle.”

NGC 2444 can be seen pulling gas out from NGC 2445 in the middle of the photo which forms a bridge between the two galaxies. NASA describes the gas as “taffy like” in appearance.

These streams, colored blue in the photo, appear to be a wave of star formation that started on NGC 2445’s outskirts and continue inward. NASA reports that researchers believe these stars were born between 50 million and 100 million years ago. These are being left behind as NGC 2445 pulls slowly away from NGC 2444.

Stars that are much younger, no older than one or two million years old, are forming closer to the center of NGC 2445 and are visible thanks to Hubble. These younger stars are the largest and brightest in the galaxy. As the stars that appear blue are clumps of stars in groups, the pink stars are giant, young, star clusters that are still shrouded in dust and gas as they continue to form.

NGC 2444 is not getting out of this arrangement unscathed. The battle of gravity has resulted in NGC 2444 being stretched into an odd shape. The galaxy also shows no examples of new starbirth, as NASA says it lost its gas long ago well before this galactic encounter.

“This is a nearby example of the kinds of interactions that happened long ago. It’s a fantastic sandbox to understand star formation and interacting galaxies,” Elena Sabbi of the Space Telescope Science Institute in Baltimore, Maryland, says.

Other Examples of Star Formation Due to Collision

Arp 143 is the latest, but not the only example of star formation due to the collision of galaxies. In 2018, NASA published a photo called “Hubble’s Cartwheel” that is, as expected, a cartwheel shaped galaxy whose shape was formed after a violent galactic collision.