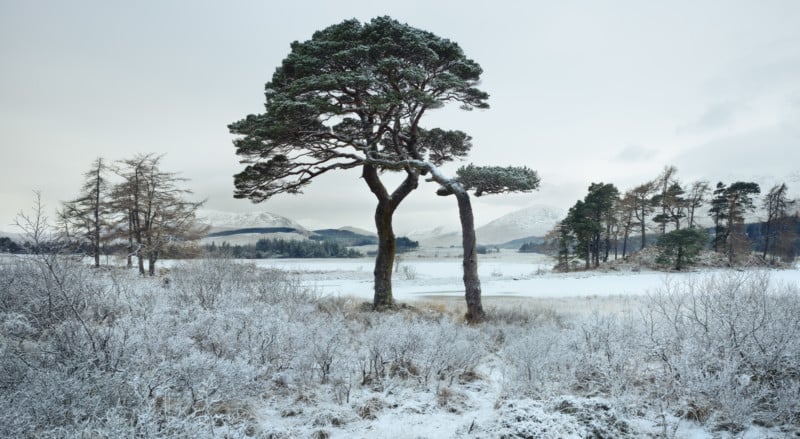 In December 2012, I made my first trip to the Bridge of Orchy. It’s a beautiful area just an hour and a half drive north of the hustle and bustle of Glasgow. It was a last-minute decision to head north from my home as there was the prospect of snow.

I had seen pictures of the two iconic ancient pines and was keen to find them. I simply wanted to see them in the flesh. If there was a photograph to be made, then that would be a bonus. I also wanted to explore Glen Orchy, as research revealed that it had the look and feel of a temperate rain forest, which I was intrigued to witness.

I arrived at the Bridge of Orchy Hotel with a few hours of daylight left. I checked in, dropped my bags off, and went straight out to see what I could see.

After a short drive over the iconic bridge, I was on the single-track road to Loch Tulla and it wasn’t long before the two trees appeared on my right, with the frozen loch and distant mountains acting as a beautiful backdrop.

Parking and walking a short distance through grasses, thick heather, and over wet boggy ground, I was there in front of the ancient Loch Tulla pines. It’s always a special moment seeing for the first time something you’ve admired and wondered about, and this was no exception.

The two trees standing in such a vast landscape, framed by others, create a beautiful and graphic shape, and have a quiet yet commanding calm about them. They are old souls for sure. The light wasn’t great and although it was wonderful simply being there observing, and taking in the sounds and smells, I didn’t feel the urge to get my camera out. I took a few iPhone pictures for reference and went back to explore Glen Orchy.

Although it was now getting dark and time was running out, Glen Orchy turned out to be more than I could have hoped for. The trees, the moss that covered them, the river, and its tributaries – it was a damp fairy tale.

It had been a perfect end to the day and although I’d not taken any pictures, I was very happy and excited about what the next few days would bring.

The next morning, I awoke early. The world outside sounded different and a little muffled. Yes, it had snowed overnight!

I went back over the bridge in my Land Rover, along the now snow-covered track, and made my way to Loch Tulla.

I knew exactly where I was going and walked with purpose through the snowy grasses.

It was a beautiful sight. The snow had made the whole scene far more graphic, far more visually simple, and the trees stood out beautifully. The tones were muted as well as the sounds. It simply felt peaceful.

I set up the ALPA and checked framing and exposure on the MFDB. I could see that the image needed more space, left and right, and so I simply used the shifting function of the camera back and made three exposures. I visualized it first with the pano function on my iPhone camera. I was very happy with the result.

The one thing I was careful to check was the area around the trees. I wanted the space to be pretty even between the trees in the background and most importantly I wanted them clear of the horizon. Once that was done, I made a few exposures and that was that.

It’s a simple, calm image, carefully framed, and it brings me a lot of pleasure when I think back to the days I spent there.

The photograph is titled “Ancient Pines by Loch Tulla, near the Bridge of Orchy, Central Highlands, Scotland, December 2012.” The image is not a crop but is comprised of three stitched frames created with horizontal shift on my ALPA 12 STC camera.

The article is courtesy of ELEMENTS Magazine. ELEMENTS is the monthly magazine dedicated to the finest landscape photography, insightful editorials, and fluid, clean design. Inside you will find exclusive and in-depth articles and imagery by the best landscape photographers in the world such as Charles Cramer, Christian Fletcher, Rachael Talibart, Christopher Burkett, Hans Strand, Erin Babnik, and Chuck Kimmerle, to name a few. Use the PETAPIXEL10 code for a 10% discount off the annual subscription.

About the author: With a personal love for the great outdoors and over three decades of experience in professional photography, Julian Calverley has become one of the UK’s most revered landscape photographers. Hooked from an early age by the breath-taking beauty of the Scottish Highlands, he has carved out a unique cinematic style of landscape photography that is instantly recognizable.

Julian’s landscape work is held in many private collections around the world, with his latest large format book of Scottish landscapes North Northwest, winning both the BBD&P ‘Best British Book’ & ‘Book of the Year.’   With the allure of the wild continuing to inspire him, Julian is focusing more on his landscape work than ever before.