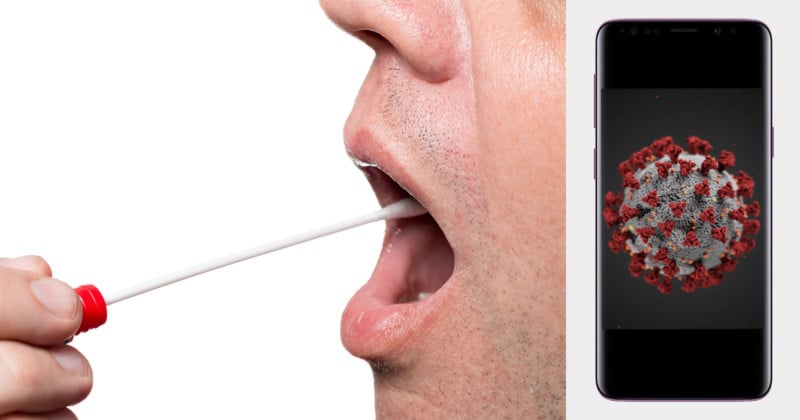 Researchers have created a new type of COVID-19 test that transforms an ordinary smartphone camera into a virus detector. The system could one day allow for cheap and accurate at-home COVID testing.


The new COVID test was developed by a group of scientists and physicians at UC Santa Barbara and Santa Barbara Cottage Hospital and was published on January 28th in the journal JAMA Network Open.

A Potential Game-Changer in the Fight Against COVID

“In a potential game-changer for COVID-19 pandemic control efforts, a new cell phone app and lab kit have transformed a smartphone into a COVID-19/flu detection system,” reports UCSB’s The Current. “The detection system is among the most rapid, sensitive, affordable, and scalable tests known — and can be readily adapted for other pathogens with pandemic potential including deadly variants of COVID and flu.

“It also provides a platform for inexpensive home-based testing.”

The scientists behind the device report that they were able to use a smartphone camera to quickly and accurately diagnose COVID-19 (including multiple variants) as well as flu viruses.

One of the key breakthroughs made by the researchers was solving the LAMP “primer-dimer” problem of false positives due to high sensitivity, something that scientists had been having trouble with for over 20 years.

The new COVID test system consists of a cheap lab kit and an open source smartphone app called Bacticount, which is available on Google Play for Android devices — the system currently only works for Samsung Galaxy S9 smartphones due to the precise camera alignment and calibration involved.

The lab kit, called smaRT-LAMP, which should cost less than $100 to put together, comprises a hotplate, a 96-well plate, LED lights for illumination, and a chemical.

To run a COVID test, a small sample of a patient’s saliva is collected and then mixed with the chemical before being placed into a well of the plate. The plate is then placed onto the hotplate to warm up, and a smartphone running the camera app is placed above the plate to capture and analyze the chemical reaction that takes place.

96 samples can be tested at the same time, and diagnostic results are returned within 25 minutes.

“The smaRT-LAMP assay is very sensitive and can detect asymptomatic infections, with a threshold of only 1000 copies of RNA (the CDC gold standard),” Forbes reports. “LAMP is more sensitive than RT-PCR (Real-time polymerase chain reaction), which requires expensive equipment and takes hours to run.”

Researchers tested the smaRT-LAMP testing system by taking saliva samples from 50 people — 20 symptomatic patients at Santa Barbara Cottage Hospital who had tested positive with standard testing methods and 30 asymptomatic people who had tested negative for COVID-19.

The 50 samples were run both on smaRT-LAMP and with the gold standard RT-qPCR tests, and smaRT-LAMP was found to match the results of RT-qPCR in 100% of cases.

Cheap Virus Tests for the World

The goal of this project was to develop rapid, low-cost diagnostics, and the researchers hope that smaRT-LAMP will one day provide better health care for those in the world without access to more expensive diagnostic methods, which may also reduce the risk of future global pandemics. 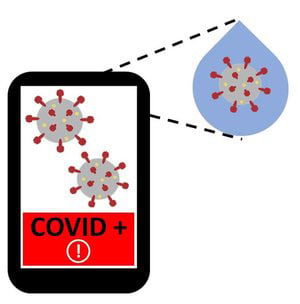 The new smaRT-LAMP has advantages over existing testing methods and scientists say it can be easily converted to diagnose a wide range of pathogens.

“PCR tests are the gold standard due to their sensitivity and accuracy, but they are slow, expensive, and not portable,” writes The Current. “LAMP tests match the sensitivity and accuracy of PCR — at a fraction of the time and cost. Further, LAMP occurs at constant temperature, which is suitable for point-of-care and home-based testing.”

One of the main advantages for the system is its affordability: in addition to the kit costing less than $100, each test can be run for less than $7 in consumable ingredients rather than $10 to $20 for rapid antigen tests and $100 to $150 for PCR tests.

“As new COVID variants emerge globally, testing and detection remain essential to pandemic control efforts,” lead author Michael Mahan tells The Current. “Nearly half the world’s population has a smartphone, and we believe that this holds exciting potential to provide fair and equal access to precision diagnostic medicine.”