It all started when a couple Iowa guys’ video production company booked a commercial video project with the nation’s largest magazine publisher in collaboration with Arizona tourism. The fun story here is how we ended up on top of a mountain, in the Arizona wilderness, taking photos.


We were hired to produce a few short videos featuring food and travel destinations in and around Tucson and Arizona’s southernmost county, Cochise. After three 14-hour days of nonstop driving and filming in places like Chiricahua National Monument, Tombstone, and Bisbee, we could finally exhale at the wrap dinner and chat up the local client.

Arizona’s arid landscape was like a different planet to me, and I was excited to explore it (in the two extra days we booked) before us flatlanders flew home.

What should we see? We had limited time and prefer to take in nature without a crowd. With countless options — Saguaro National Park, The Grand Canyon, Antelope Canyon — we asked the locals for a recommendation. Our new friends didn’t let us down. They recommended Schnebly Hill Road just outside Sedona with a mention about the road requiring an SUV (they weren’t kidding).

A Trip Up Schnebly Hill Road Near Sedona, Arizona

Late that night we left Tucson, driving a Hyundai Tucson rental, and got a couple hours down the road before finding some much-needed rest at a roadside hotel. We were stocked with production gear, which meant we had limited room for camping supplies. At least I had my Chacos. They could take me anywhere.

After a quick stop at REI, we had an ultralight tent (just over two pounds) and a few extra water bottles.

As we arrived in Sedona, we knew we were going to check out Schnebly Hill Road but didn’t have a plan after that. We stopped at a gas station to see if we could find a trail map. We saw that Munds Mountain, the second-highest summit in Sedona at 6,834 feet, had a trailhead off Schnebly, and our plan quickly took shape. Instead of taking the direct route to the trailhead through Sedona, we exited to a much longer route that Google strongly encouraged. We soon learned why.

Coming in from the northeast, Schnebly Hill Road quickly changed from concrete to gravel and from gravel to huge holes and jagged rocks. It was more like an overlanding adventure than driving on a road, which meant our small SUV was quickly becoming inadequate. It must have taken 30 minutes to go a couple miles.

Maybe I should have purchased the extra insurance on this thing, I thought to myself, as thoughts of abandoning the mission before busting up the rental bounced around in my head. Just before a treacherous downhill stretch, we squeezed into an off-road spot and ditched the vehicle. We had a mountain to scale to reach the designated wilderness (where dispersed camping was allowed) before it got dark.

While hiking the “road” down to the trailhead, we were passed by what we could only assume was a freshly washed rental car. Yes. Car. It was a brand new, bright blue, Ford Fiesta. Had we just wussed out? Moments later, when the car turned the corner out of view, a screeching-grinding sound told us we made the right decision.

It was halfway into our hike (with an extra mile under my chacos from missing the trailhead and having to backtrack to it) when I started to feel the afternoon desert heat. I was feeling a little lightheaded. Was it the altitude? Was I dehydrated? I probably hadn’t had enough water the last three days (a bad habit while working).

An hour later, and halfway up the mountain, I was pretty sure I was experiencing heat exhaustion. I had to face the decision, yet again: do I call it and turn around? A half-hour of rest in the shade persuaded me it wasn’t a terrible idea to continue. I took a few sips and looked down at the water bottle. I had drunk two-thirds of the day’s water—right on track—but my thirst made it obvious I hadn’t brought enough. And being in the high desert, we weren’t going to find any aquifers. But on we continued. 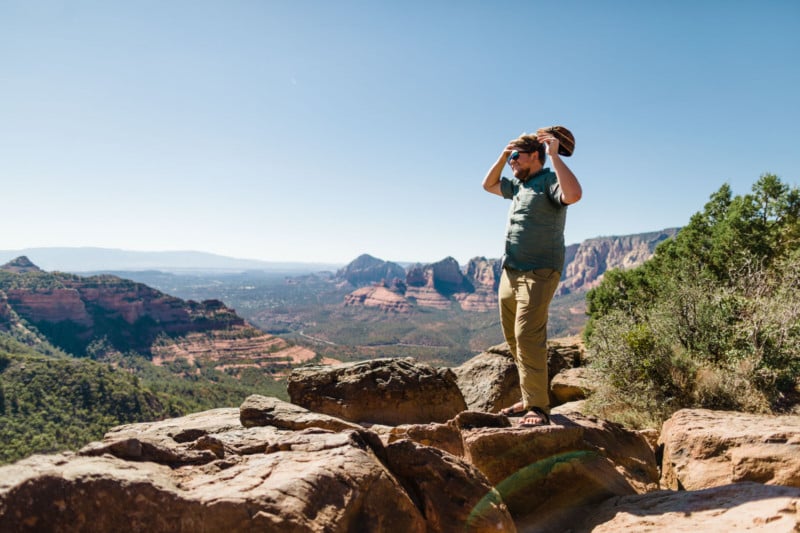 I was carrying too much weight in my backpack. I should have left the coffee-making supplies behind. There’s no way I was making coffee in the morning with our water limitations.

My photo camera and (only) three prime lenses were also feeling heavier. Should I have traded one lens for an extra bottle of water? Yes, as long as the lens I left behind wasn’t the 135mm. I’ll get to that.

The nausea and dizziness started to pass as we came to the most technical part of our hike. It was late in the day and the temperature was becoming more comfortable as we entered the shade of Munds Mountain. We hiked through the mountain’s saddle and then started scrambling up the steep, loose-rock section. I was glad the dizziness had left me as I balanced on the edge of a cliff.

After losing the trail a couple times in some unmarked, sketchy places, we made it to the flat top. What a relief! And just in time to catch the sun setting over Sedona. We each ate an apple and granola bar and sipped our remaining water for the day as we watched the sunset, but it wasn’t the peaceful moment I was hoping for. The setting sun revealed the glow of distant forest fires, something a couple Iowans know nothing about. We questioned the safety of camping in such a dry environment with multiple fires across the valley, but, with cliffs between us and our car, there was nothing we could do but wait for daylight.

An Eerie Night Gives Way to an Awe-Inspiring View

The hot desert gave way to a cool, eerie night filled with unfamiliar sounds from unknown animals. Several times throughout the night, I had to remind myself that the sound startling me awake was the camera shutter from my overnight timelapse.

Just before dawn I recognized a sound I always hear when camping in Iowa’s Driftless Area: coyotes. And judging by the symphony of howls, there were a lot of them, and they were right on top of us. As the howls distanced, I peeked out of our paper-thin tent and looked to the ridge.

There it was. The most beautiful overlook I could imagine. We rushed to the cliff edge to take it in.

After snapping a few wider angle photos on my 24mm, I decided it just wouldn’t do. I put on the 135mm, a mid-range telephoto, and started strategically snapping across the horizon while visualizing these images compiled into a detailed panoramic. 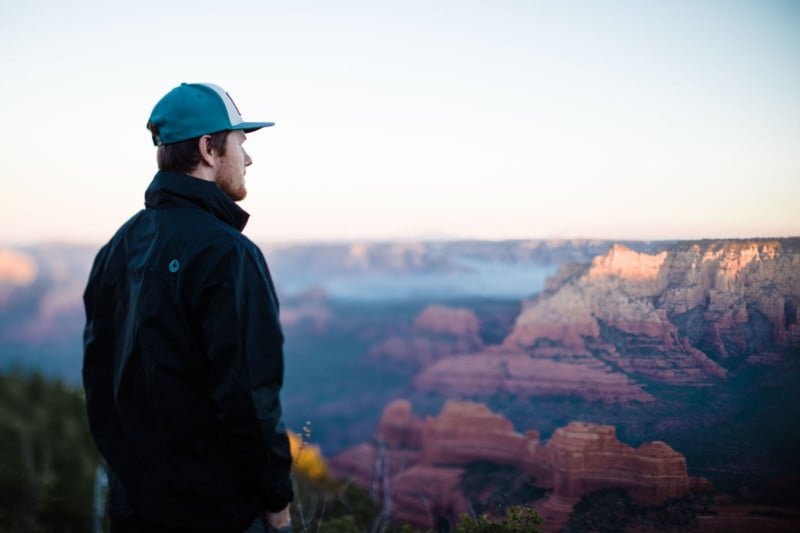 It was a perfectly clear morning with fog rising out of the valley. We could see for miles. While there is a little bit of detail loss from 40 miles of atmosphere to the mountains, there was barely any in the valley thanks to the dry air holding over the fog.

The landscape photographer in me could hardly stop snapping long enough to take it in with my bare eyes. Between photos, we pointed out details that weren’t as obvious the night before.

“I think that’s Humphreys” (the highest natural point in Arizona at 12,637 feet), said Ryan, as I continued to snap until the desert sun lit up the canyon.

We ate some instant oatmeal, packed our tent, and started the descent. It was a mostly uneventful hike down, but when we reached the road, a bright blue bumper, in its entirety, lying in the middle of it gave us a good chuckle.

The last mile uphill to our rental was challenging, especially since our water bottles had dripped their last drops, but we were going to make it. And we had an experience (and photos) that will last a lifetime.

We didn’t see a soul on the trail or off the road, so it was safe to say we were the only people to watch the sunrise from Munds Mountain. It was a good morning. 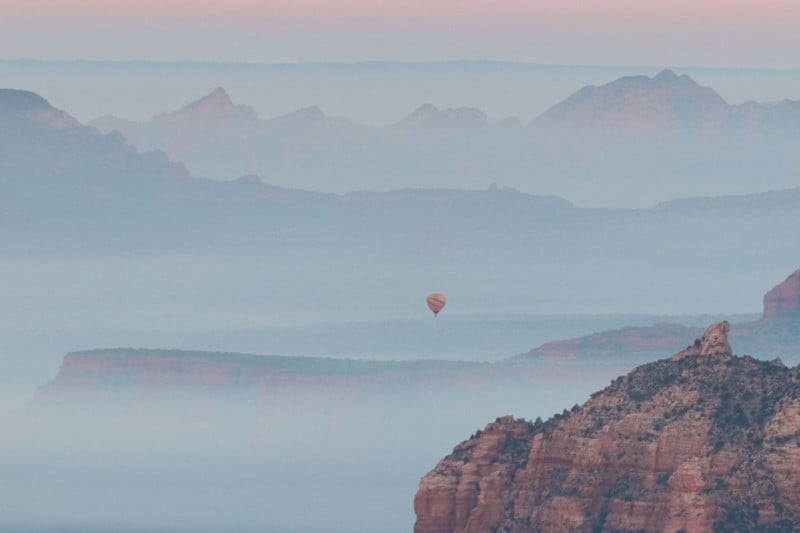 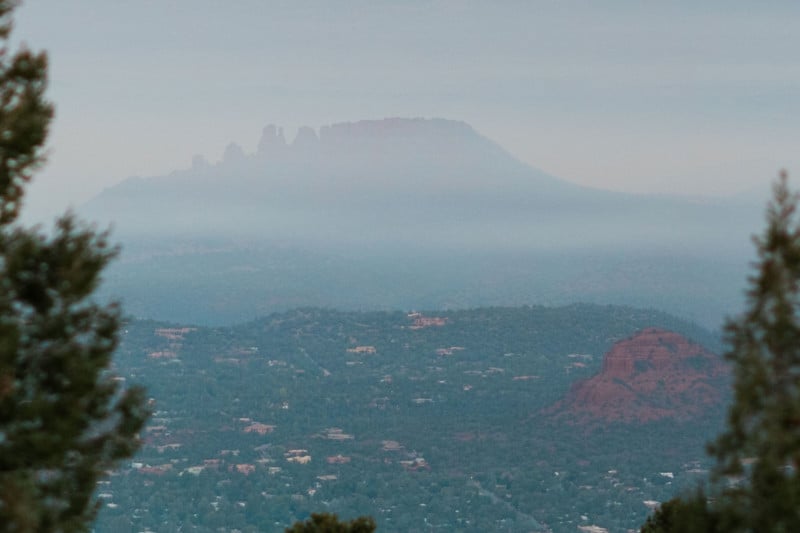 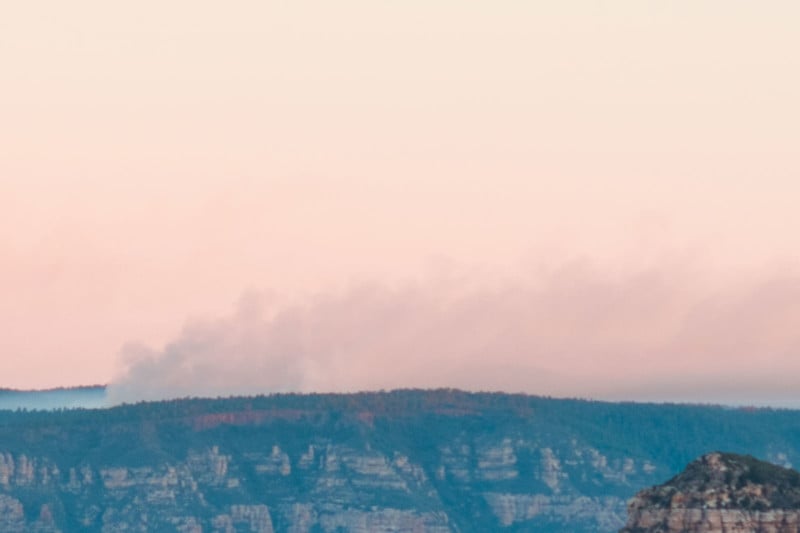 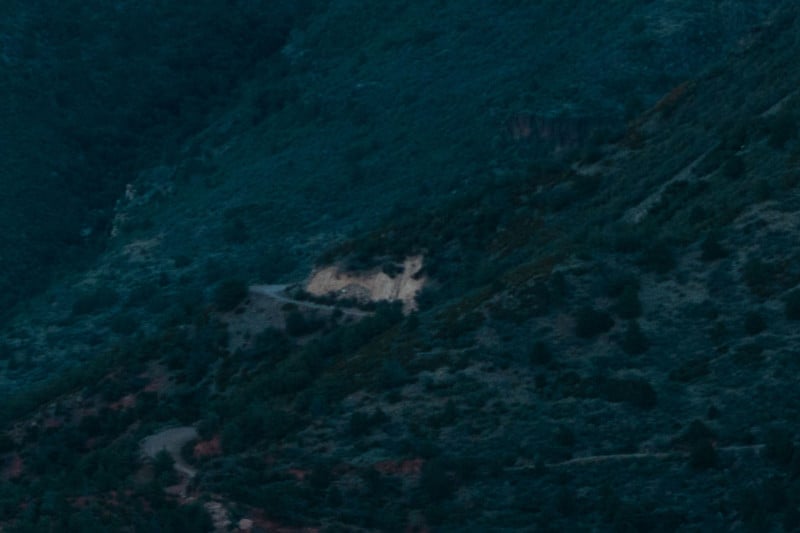 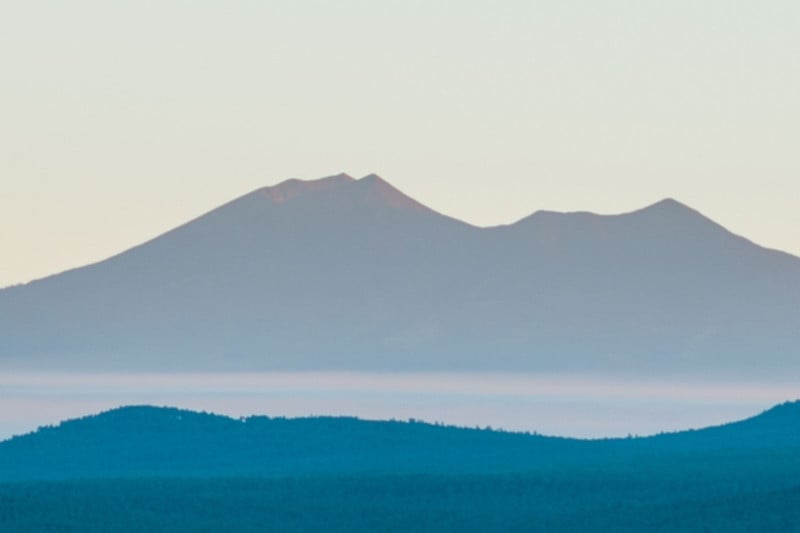 A couple years later now, we are still dissecting the resulting 418-megapixel photo and finding new details and landmarks each time we view it. Comparing it to a Sedona map makes it a fun experience still.

It’s my hope to one day see it printed to its full potential. It could be printed over 14-feet wide at a highly detailed resolution of 300dpi (the number of dots a professional ink printer puts down per inch in each direction). It could even line a hotel lobby wall at 5-feet tall and 28-feet wide with little detail loss. The next challenge will be framing that monstrosity (but I have a plan!).

Details About the Photo

About the author: Dave Poyzer (production manager & director of photography) is an accomplished landscape photographer, avid Driftless Area fly fisherman, experienced paddler, mountain bike hobbyist, and roller hockey amateur. He has a deep love for all things outdoors, vintage (especially cameras), and third-wave coffee. He likes entrepreneuring enjoyable work for himself and others whether it’s a career, an art project, or renovating an 1898 home with his wife Mariah.