The Hubble Space Telescope, while soon to be succeeded by the James Webb Space Telescope, continues to capture important images of the universe. In two recent images, perspective plays an important role in how these galaxies appear.

The Truth Behind This Cosmic Duo

Earlier this month, Hubble captured an unusual photo of two galaxies that appear to be colliding with one another. Hubble’s focus was on the spiral galaxy NGC 105 which lies roughly 215 million light-years away in the Pisces constellation. Looking at the photo, it appears as though NGC 105 is colliding with into a neighboring galaxy, but it is here that perspective plays an important role. “This is just a circumstance of perspective,” NASA explains. “NGC 105’s elongated neighbor is actually far more distant. Such visual associations are the result of our Earthly perspective and they occur frequently in astronomy.”

Nasa says a great example of how perspective plays a big role in our perception are constellations. The stars that form constellations in Earth’s sky at night are not as close to each other as they seem and are actually vastly different distances from Earth and each other.

“To us they appear to form these patterns because they are aligned along the same sightline, while an observer in another part of the galaxy would see different patterns,” NASA explains.

In this case, the smaller, elongated neighbor of NGC 105 remains relatively unknown to astronomers thus far.

A Galaxy With a “Sail” Made of Stars

Hubble also photographed the galaxy below, named NGC 3318, that lies in the constellation Vela and is much closer to than NGC 105, at just a mere 115 million light-years from Earth. NASA explains that Vela was originally part of a much larger constellation known as Argo Navis, but the size of the massive constellation proved unwieldy and impractically large. 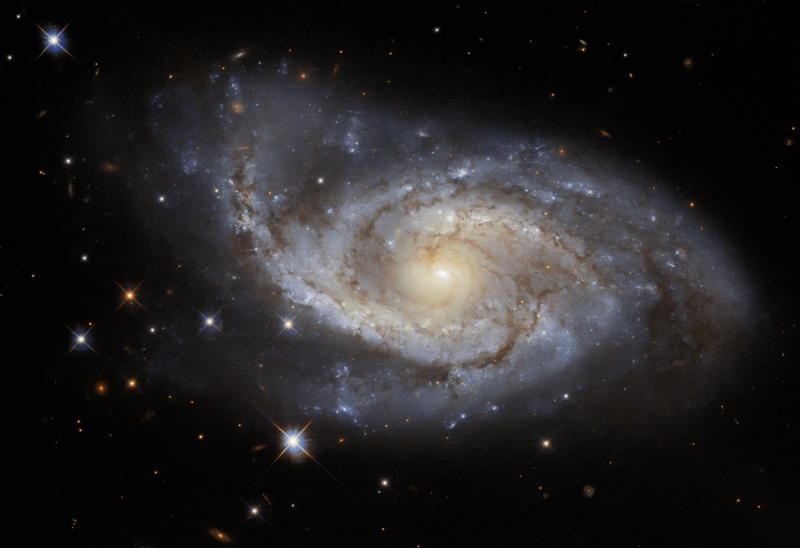 The nautical references don’t end there, as NASA scientists note that the out edges of NGC 3318 almost resemble a ship’s sails blowing in the wind. Just as was the case with NGC 105, the appearance of these “sails” is very likely due to Hubble’s unique perspective.

Questions about the Expansion of the Universe

Astronomers recently analyzed the distances to a sample of galaxies including NGC 105 and their velocities to measure how fast the universe is expanding — this is a value known as the Hubble constant. The results aren’t consistent, and that’s proving troubling.

Their results don’t agree with predictions made by the most widely accepted cosmological model, and their analysis shows that there is only a one-in-a-million chance that this discrepancy is the result of measurement errors. The difference between galaxy measurements and cosmological predictions is a long-standing source of consternation for astronomers, and these recent findings provide credible new evidence that something is either wrong or lacking in our standard model of cosmology.