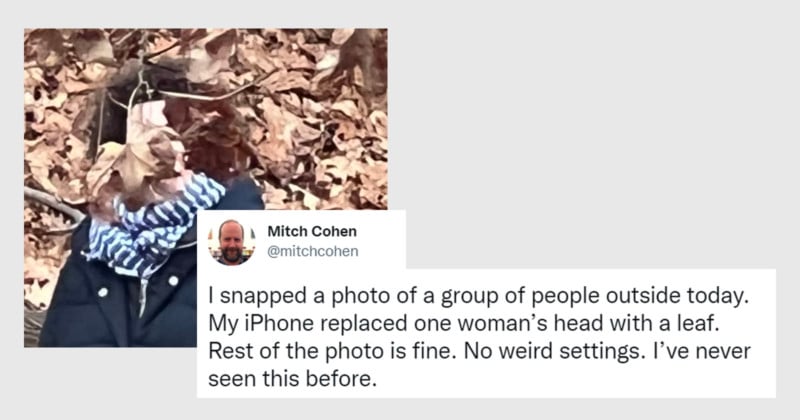 iPhone developer Mitch Cohen shot a group portrait with his iPhone last week and was baffled when he reviewed the photo afterward and found that his iPhone had apparently “replaced one woman’s head with a leaf.”

Cohen took to Twitter to report the bizarre photo and see if he could get to the bottom of what happened. 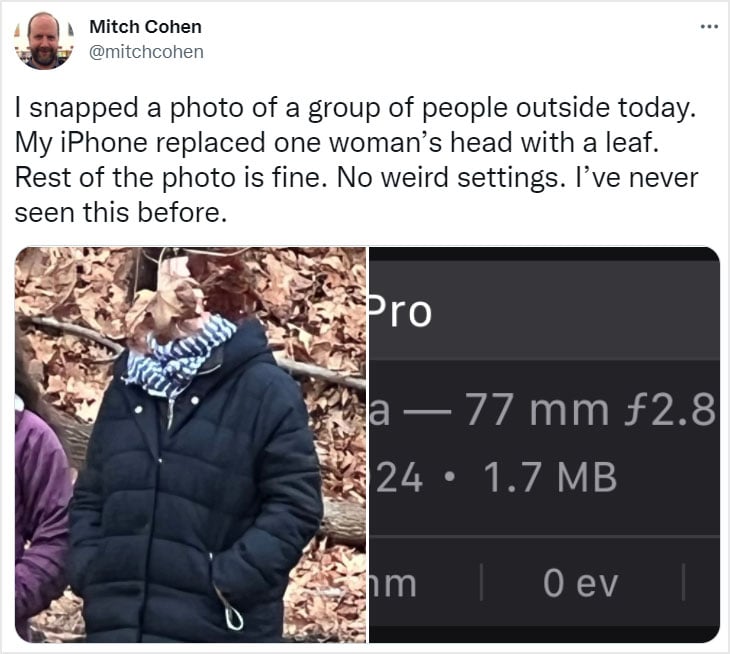 “I snapped a photo of a group of people outside today,” Cohen Tweeted on December 29th, 2021. “My iPhone replaced one woman’s head with a leaf. Rest of the photo is fine. No weird settings. I’ve never seen this before.

“My original thought was the iPhone got confused doing image stabilization while zoomed a decent bit. The real leaves are behind her, across the street. Feedback implies it an accurate photo of a leafy human, and I’m open to that.”

The Tweet attracted over 400 Retweets and 3,100 Likes as people joined the discussion to solve the mystery. Suggestions for what could have caused the replacement included photo improvement algorithms in the iPhone camera mistaking the woman’s face for the background of the scene.

An iPhone Camera App Developer to the Rescue

The discussion soon caught the attention of Sebastiaan de With, the co-founder and developer of Halide, the popular camera app for iOS.

“Hey Mitch, I develop [a] camera app and I would love to investigate this,” De With wrote. “Would you be willing to share the original image with me and potentially any other images you took before and after this?”

As the principle of Occam’s razor suggests, the simplest explanation is usually the best one. After De With examined the photo more closely, he concluded that the most likely explanation was that… a foreground leaf was obscuring the subject’s face.

Cohen revisited the scene and realized that it was true — he hadn’t noticed the foreground leaves in the frame when he had snapped the photo.

“I sent [Sebastiaan de With] the original image,” Cohen wrote in his follow-up Tweet. “He theorized a leaf from a foreground tree obscured the face. I didn’t think anything was in view, and the closest tree is a Japanese Maple (smaller leaves). But he’s right!”

Cohen included a video showing the parallax of the foreground and background leaves:

Big news! I sent @sdw the original image. He theorized a leaf from a foreground tree obscured the face. I didn’t think anything was in view, and the closest tree is a Japanese Maple (smaller leaves). But he’s right! Here’s a video I just shot, showing the parallax. Wow! pic.twitter.com/ZQrslDpGRi

“An amazing optical illusion,” Cohen continues. “Kudos to the iPhone for actually getting this right when my eyes could not. […]

“A few others suggested a foreground leaf. I honestly didn’t think so. I thought I knew my trees. The illusion was so convincing to me that I ‘knew’ it to be something else, until I proved otherwise to myself. Kudos to those who saw it first.

“Digital ‘magic’ during photo processing seemed like a good bet. The photo was handheld, without much thought as the photo wasn’t terribly important to me. Others thought the same, with varying (and viable) specifics. The iPhone has an amazing camera system; some goofs are fine.”

De Width notes that this is an interesting example of how focal length and distance to subject can distort a viewer’s perception, something often referred to as “lens” or “focal length” compression.

“What a wild ride! Thanks for being so kind to entertain my request, it is a very cool lesson in focal length compression!” De With writes.

Sometimes a Leaf is Just a Leaf

Camera and photo editing technologies can create humorous and unintended results, but that was not the case in this particular mystery.

“To misquote Freud, sometimes a leaf is just a leaf,” Cohen tells PetaPixel. “The optical illusion sure tricked me into thinking I’d witnessed overzealous image processing. Most people thought the same. A few realized what happened even more I did.

“Many had a lot of fun with this. Perhaps I’d stumbled upon a secret Apple initiative to filter photos of those in Witness Protection. Or I’d foiled invasion plans of a new alien species of plant people.

“A few used the photo, and the apparent unwanted digital enhancement, as an opportunity to share their dislike of Apple, or of digital photography as a whole. That was disappointing. I’ve taken roughly 47,000 iPhone photos. It’s an amazing camera system. Sometimes I miss a film SLR (I still have the Canon AE-1 I bought as a kid in 1980) but my percentage of good shots is way higher on the iPhone. I have a Canon 6D around for big family events.

“I barely reach for it anymore.”