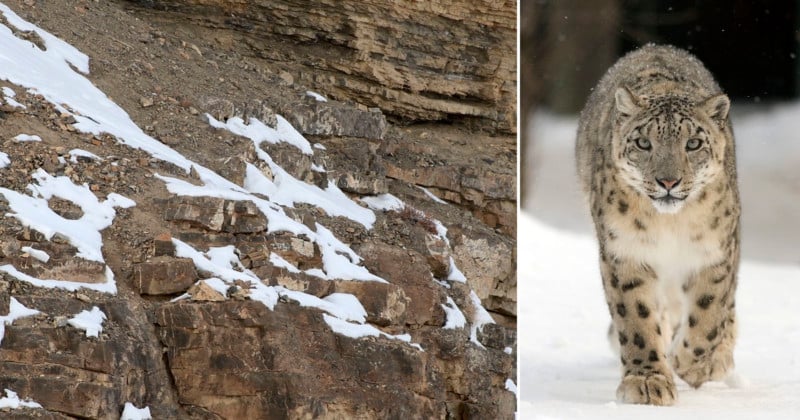 Snow leopards are a threatened species that live in extreme environments and are notoriously difficult to see and photograph. Photographer Ismail Shariff captured a series of photos showing just how difficult it is to spot a snow leopard in the wild.


Shariff, a 41-year-old professional wildlife and nature photographer based in India, has been obsessed with photographing the elusive snow leopard over the past decade, and after years of trying, he finally encountered one in 2014 in Hemis National Park. The high-altitude national park in Ladakh, India, is world-famous for its population of snow leopards.

In the years since, Shariff has been lucky enough to capture many photos of snow leopards, both up-close and from a distance.

To show just how well snow leopards’ camouflage allows the cats to blend into their surroundings, Shariff collected a series of five photos to challenge viewers.

Snow Leopards Are Hidden In These 5 Photos

Each of the following five photos has at least one snow leopard within the frame. They are small, so you may need to zoom in and look closely — clicking/tapping each photo will bring up a higher-resolution version.

Can you find the snow leopards? (The answers will follow below.)

Shariff captured these photos with a Canon camera equipped with a 600mm telephoto lens.

The Answers to Where the Snow Leopards Are Found

Snow Leopards Are Getting Harder to See

Snow leopards “are the master camouflage artists of the mountains; they may be right in front of you, and you will not be able to see them,” Shariff tells The Epoch Times. “That is why you need a very trained eye, a very experienced eye to actually go see them in the wild, which is what I do and what I have come to be known for.”

In addition to being masters of camouflage, the snow leopard (Panthera uncia) is classified as a vulnerable species. Fewer than 10,000 of the cats are estimated to be in the wild in the world, found at elevations higher than 9,800 feet (3,000m) across South Asia.

That number is expected to continue its decline over the coming years as snow leopards face continued threats from the loss of their habitat as well as from poachers, so seeing one to photograph will likely be increasingly difficult in the future.