The Monterey Bay Aquarium Research Institute (MBARI) recently spotted an exceedingly rare find: a barreleye fish (Macropinna microstoma). This strange deep-sea dweller has a transparent head it sees through with its tubular eyes.

MBARI uses a pair of remotely operated vehicles (ROV), the Ventana and the Doc Rickets, to survey the ocean at various depths. In the more than 5,600 successful dive missions and more than 27,600 hours of video, the team has only ever seen this fish a scant nine times.

Aquarist Tommy Knowles and his team were aboard MBARI’s R/V Rachel Carson with our ROV Ventana to collect jellies and comb jellies for the Aquarium’s upcoming Into the Deep exhibition when they spotted this fascinating fish. The team stopped to marvel at Macropinna before it swam away.

The barreleye is a particularly unique species of fish. It lives in what is called the twilight zone of the ocean at depths of 2,000 to 2,600 feet. That deep, light comes at a premium and different species have developed unusual traits to adapt to the environment. Of those, MBARI says that the barreleye is one of the most bizarre.

“Two small indentations where eyes might normally appear on a fish are actually the barreleye’s olfactory organs, and its eyes are two glowing green orbs behind its face that gaze up towards the top of its head,” MBARI explains.

The barreleye doesn’t get particularly large and has an estimated maximum size of just six inches long. It is known to exist between the Bering Sea to Japan as well as Baja California.

The research team had previously shown that the fish can rotate its eyes towards the front to see its food when eating. Before that, scientists believed that the fish had its gaze permanently fixed upwards, which would be helpful to it as the fish is believed to often hover below a siphonophore’s tentacles to steal food.

“Its eyes look upwards to spot its favorite prey — usually small crustaceans trapped in the tentacles of siphonophores — from the shadows they cast in the faint shimmer of sunlight from above.” 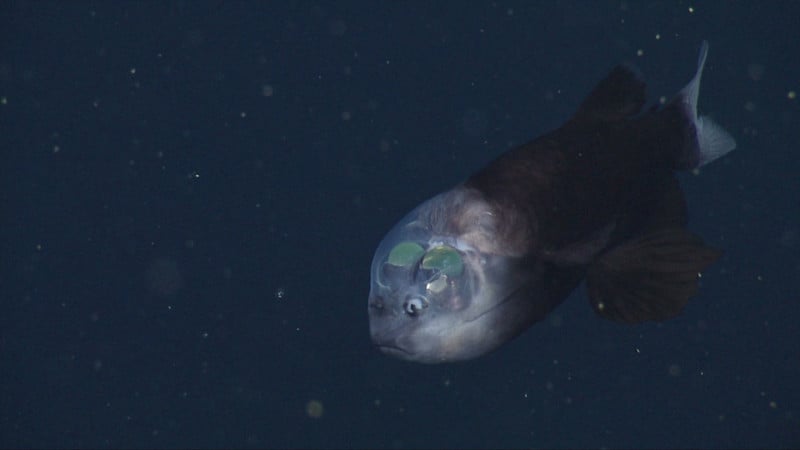 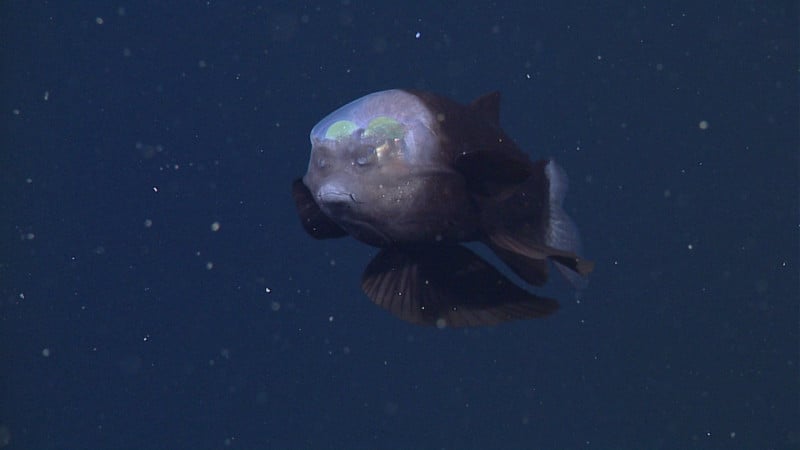 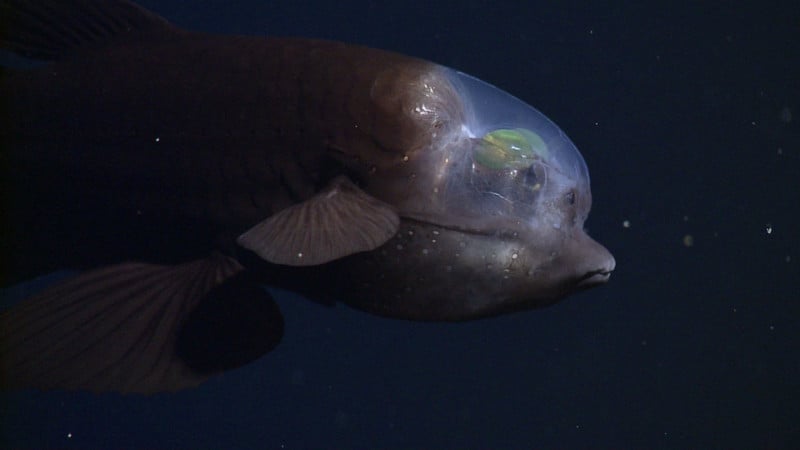 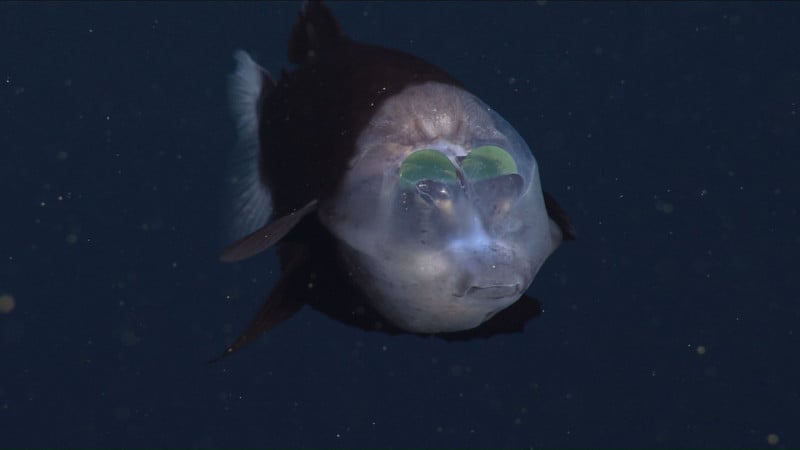 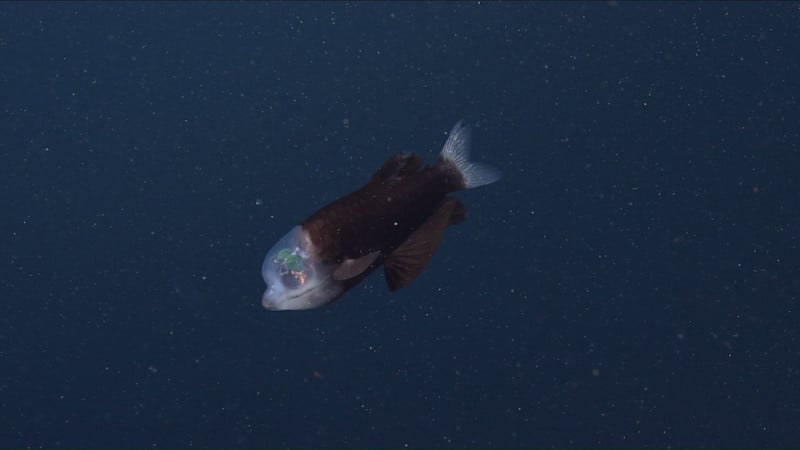 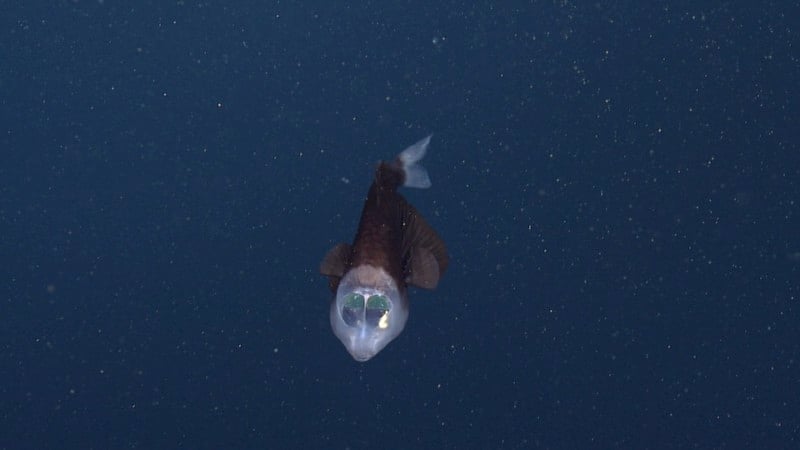 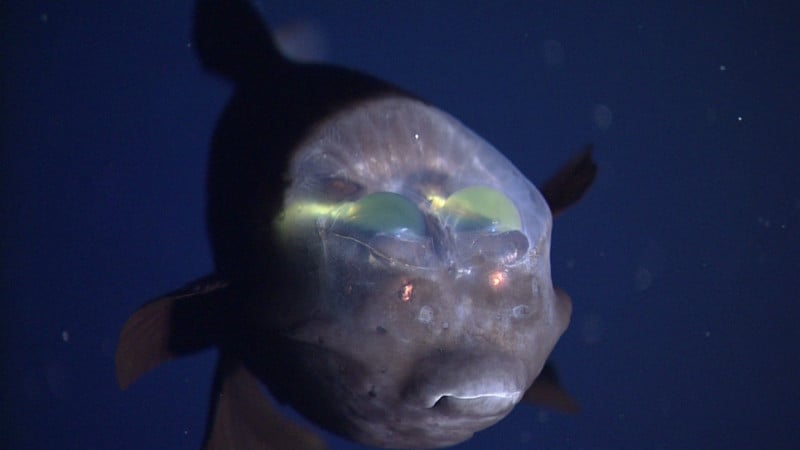 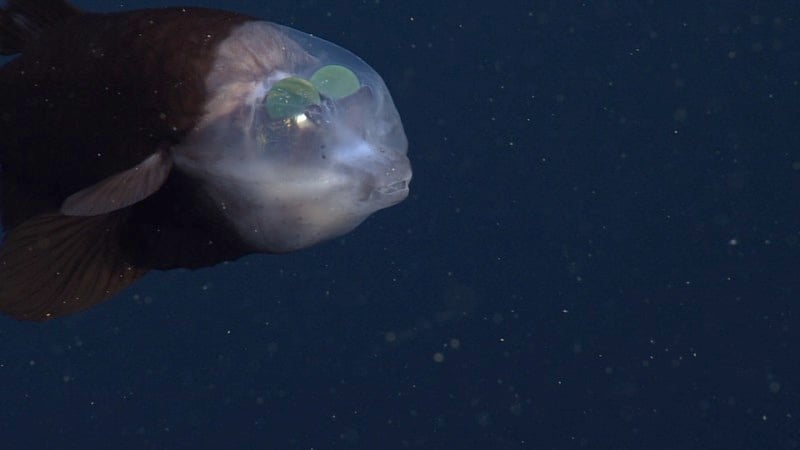 MBARI is working with the Monterey Bay Aquarium to bring deep-sea creatures to its Into the Deep exhibit set to launch in the spring of 2022, though it’s not clear if the barreleye will make an appearance. The organization has set up a detailed webpage on the rare fish for those interested in learning more about one of the ocean’s most bizarre creatures.