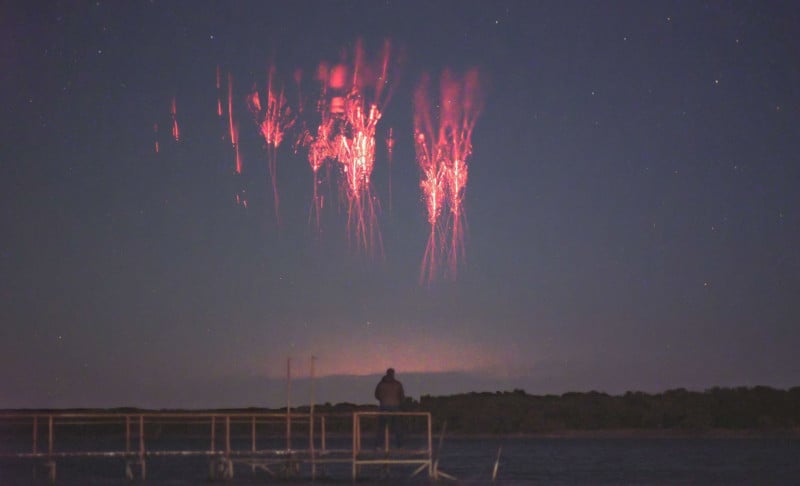 Landscape photographer Paul M Smith has captured an incredible photo of rare red sprites in the night sky. The dazzling display looks like a fireworks show put on by Mother Nature.

Smith is a photographer based in the Midwest who has made a career out of hunting for red sprites and other transient luminous events (TLE).

Sprites are huge electrical discharges that occur high in the atmosphere above cumulonimbus thunderstorm clouds. While most people may never have seen one in person, they are believed to occur above most large thunderstorms due to discharges of positive lightning.

“This capture was over a November storm system close to me in Oklahoma,” Smith tells PetaPixel. “I drove a few hours from home to find a dark sky to shoot from.”

The photographer drove into Oklahoma and pointed his camera back toward wild storm systems swirling above Missouri and Arkansas.

“To pick a spot, I had forecast where the system would probably produce sprites, and from there, a good place to observe,” Smith says. “After a few hours of the storm building, it looked like a certain portion of the storm would be producing sprites.”

Once the location and conditions are right, a photographer then also needs a bit of good luck for the right sprites to happen at the right time.

“I was able to set up for this composition on a lakeshore during the height of activity and managed to capture a number of large, bright specimens from this part of the storm,” the photographer says. “Because the moonlight was interfering, the sprites appeared more magenta than red.”

As is often the case with photographs of auroras, a sad truth about sprite photography is that a camera can capture far more than the human eye can usually see. That said, sometimes if sprites are bright enough, they can be visible to observers on the ground.

“Though it was very quick, I did see the brighter parts of this one with my eyes,” Smith says. “They looked like white lines throughout the sky — they did not exactly look like what the camera captured.”