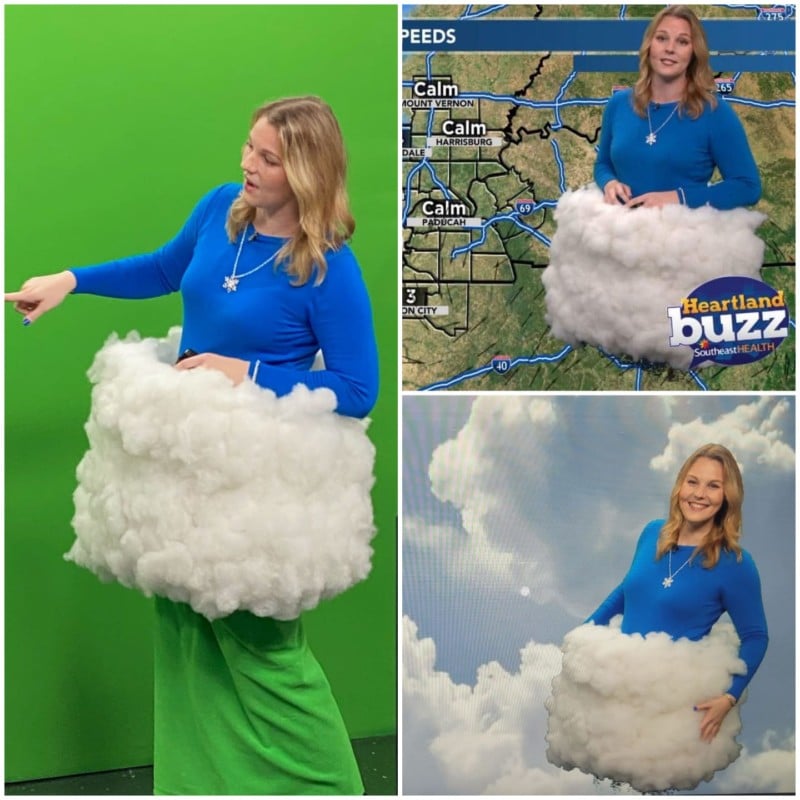 People watching the weather report on KFVS News in Missouri got a surprise last week when meteorologist Lisa Michaels floated into the frame on a cloud. She had come up with the perfect Halloween costume for the green screen and TV cameras.


Lisa’s special effects cumulus cloud costume consisted of a fluffy cloud wrapped around her waist and a skirt the color of the green screen to make her legs disappear.

“I don’t want to give away my design secrets, but I can tell you that I used lots of hot glue and fiberfill in addition to green fabric to give the appearance of my floating when in front of the green screen,” Michaels tells PetaPixel.

While all kinds of clever fun can be had when a green screen is involved, Michaels wanted to make sure her costume was something that tied into her profession.

“My inspiration is a culmination of costumes that I have seen through the years,” she says. “Being an Atmospheric Scientist, I wanted to incorporate a weather-related theme to engage the viewers while presenting the weather.”

An example of a non-weather-related meteorologist costume is when Jude Redfield of WDRB News appeared on camera as “Bones Redfield” the skeleton:

Let the kids watch @WDRBNews this morning. Bones Redfield will be showing up soon! They will love it! pic.twitter.com/bIkONoYx9n

Michaels’ humorous costume has since gone viral online after she shared it on her Facebook page, where it received tens of thousands of reactions, comments, and shares. Michaels says it has received millions of hits through websites and social networks such as Reddit and TikTok.

Given the overwhelmingly positive response, perhaps Michaels should make this her standard on-air outfit and add flashing LED lights to the cloud when forecasting storms.