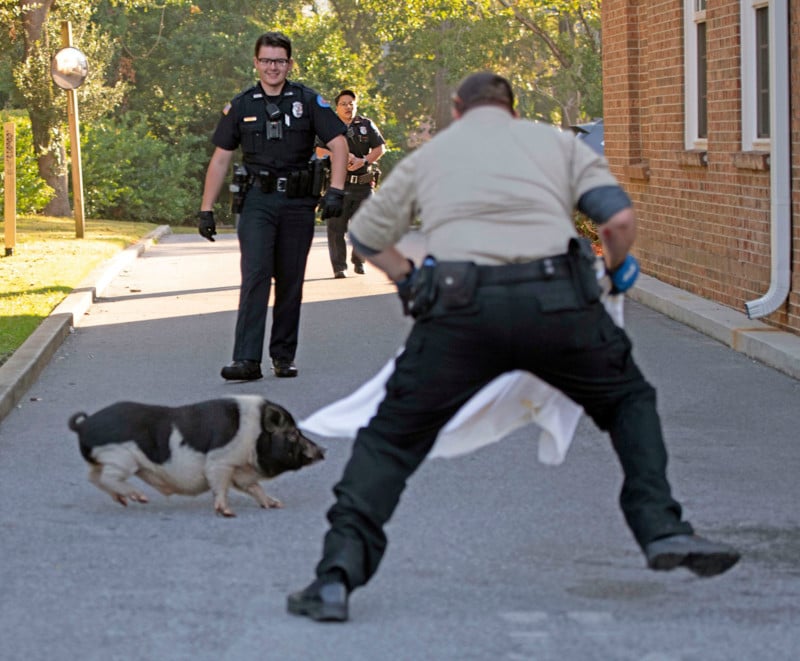 Photojournalist Tony Giberson of the Pensacola News Journal documented quite the police chase this week when law enforcement spent an hour trying to chase down a runaway potbellied pig.


The Pensacola Police Department says that it received calls during the night from people who spotted “an ugly dog or perhaps a Chupacabra” that was running amok downtown.

“When the sun rose, we found it to be a determined pig that had zero intention of returning home,” the department writes on Facebook. “Employing a strategy that we saw drawn in the dirt (we drew it), she was finally wrangled and turned over to authorities.”

The chase started at around 7:15 am on Tuesday and eventually involved five police officers, two animal control officers, and two code enforcement officers.

As Giberson’s photos show, the team had quite a difficult time capturing the little guy. The pig was able to put the moves on the pursuing officers and elude them throughout the hour-long incident.

The chase finally ended at around 8:15 am after a police officer managed to jump on the pig and subdue it.

“No warrants on the pig, don’t know why he’s running or where he came from,” police department spokesman Officer Mike Wood tells the Pensacola News Journal. “What we were trying to do is keep him north of Garden Street because if the pig ran out on to Garden Street, it could cause all sorts of problems.

“Garden Street is a busy street, and if he ran out onto Garden, the pig could get hit. So we were trying to keep him north of Garden until Animal Patrol could get there.”

If you know who owns this guy, please contact us so we can get him home. pic.twitter.com/UNe5iR3QKL

After it was finally captured, the pig was placed into “protective custody,” according to the police department. Authorities are now looking for its owner. There is no word yet on whether the pig will face any criminal charges for running from the law.