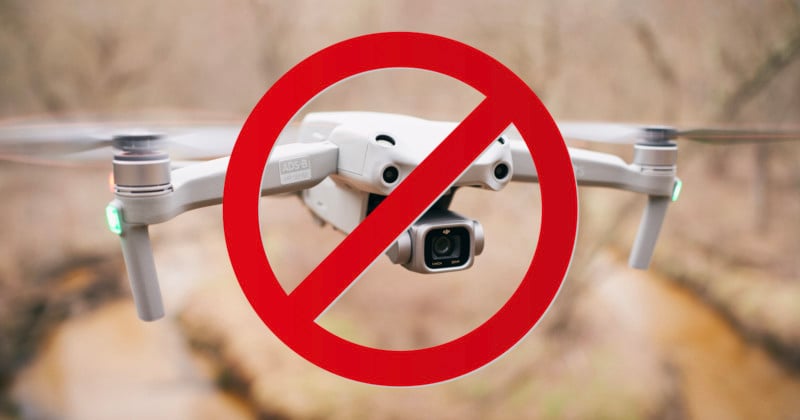 FCC Commissioner Brendan Carr has called for the addition of DJI drones to the FCC Covered List, which could prevent the company from selling its products in the United States.

In a letter published to the FCC official website, Carr accuses the Shenzhen-based drone company of collecting “vast amounts” of sensitive data and effectively calls the drones Chinese surveillance.

“DJI drones and the surveillance technology on board these systems are collecting vast amounts of sensitive data — everything from high-resolution images of critical infrastructure to facial recognition technology and remote sensors that can measure an individual’s body temperature and heart rate,” Commissioner Carr said in a damning statement.

“Security researchers have also found that DJI’s software applications collect large quantities of personal information from the operator’s smartphone that could be exploited by Beijing,” he continues.

Carr says that one former Pentagon official has even said that the government agency knew — written as a statement of fact — that much of that information was being sent back to China from DJI drones.

“DJI’s collection of vast troves of sensitive data is especially troubling given that China’s National Intelligence Law grants the Chinese government the power to compel DJI to assist it in espionage activities,” Carr says.

DJI was placed on the Commerce Department’s Entity List last year, colloquially called the “economic blacklist.” Its placement there made it so that American companies could not export parts to DJI. Companies on the blacklist would theoretically find it harder to sell products in the United States, but DJI does not appear to have suffered this problem.

Carr says that many of the concerns he has are linked to DJI’s widespread use by various state and local public safety and law enforcement agencies. There are also reports that the U.S. Secret Service and the FBI also use DJI drones, which Carr says makes it even more important that a full review of DJI is conducted to address potential national security threats.

Carr says that evidence against DJI has been mounting for years, specifically citing eight examples. The earliest example is from a 2017 bulletin from the Department of Homeland Security that found DJI was likely sending sensitive infrastructure and law enforcement data to China. The most recent example is a 2021 Department of Defense statement that said the agency is convinced that DJI systems pose a threat to national security.

The FCC Chairman says that despite these continued and regular instances of concern, no consistent nor comprehensive approach to address the company as a threat has taken place.

“That is why the FCC should take the necessary steps to consider adding DJI to our Covered List. We do not need an airborne version of Huawei,” Carr says. “As part of the FCC’s review — and in consultation with national security agencies — we should also consider whether there are additional entities that warrant closer scrutiny by the FCC.”

Should DJI be added to the FCC Covered List, federal agencies would be prohibited from purchasing equipment made by the company. The FCC could also determine that it would no longer approve products for sale in the United States regardless of if federal dollars were spent on them. Huawei, for example, is already on the Covered List based on a determination that it
poses an “unacceptable” security risk.