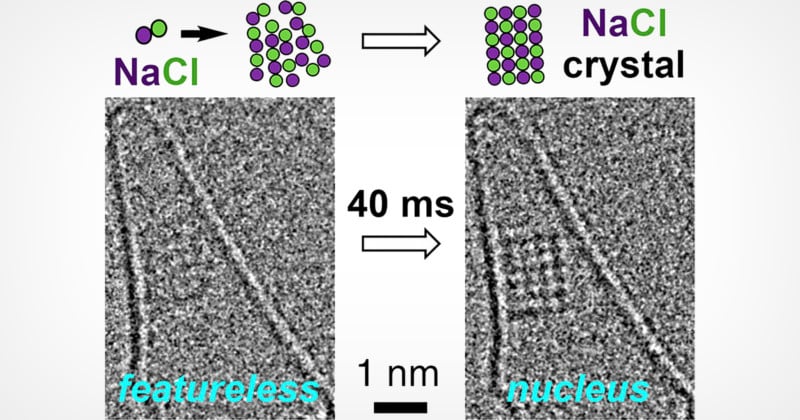 Researchers have developed a new way to shoot atomic resolution footage that has allowed them to watch the never-before-seen details of salt crystal formation and confirm long-held theories on the process.

Crystals formation takes place in a variety of ways from snowflakes to grains of salt. What makes the process of crystal formation notable for researchers is the process of growth from a disordered state into an ordered one. Nucleation, as this is called, happens when regular and repeating arrangements of molecules grow together from a sea of chaos. While a lot has been speculated about this process, what is exactly happening has only been theorized, never experimentally confirmed, until now.

Atomic resolution video has been a thing for some time now, but it hasn’t been enough to just see molecules at an atomic level to confirm what is happening at the point of crystallization. As explained by Phys.org, it’s not enough to just see them at that level because the growth of a crystal is a dynamic process and the observations of developing over time are as important as the observations of the structure.

Researchers at the Department of Chemistry at the University of Tokyo managed to provide that real-time video feed by using a single-molecule atomic-resolution real-time electron microscopy technique, or SMART-EM. Thanks to the process, the researchers were able to capture the detail of the crystallization at 25 images per second.

“One of our master’s students, Masaya Sakakibara, used SMART-EM to study the behavior of sodium chloride (NaCl)—salt,” Takayuki Nakamuro, the Project Assistant Professor says. “To hold samples in place, we use atom-thick carbon nanohorns, one of our previous inventions. With the stunning videos Sakakibara captured, we immediately noticed the opportunity to study the structural and statistical aspects of crystal nucleation in unprecedented detail.”

Nakamuro and his team were the first people ever to see the tiny crystals made up of NaCl molecules emerge from the chaotic mixture of separate sodium and chlorine ions. They immediately were ablet to see a statistical pattern in the frequency at which these crystals emerged following what is known as “normal distribution.” This process has long been theorized but this was the first time it was able to be confirmed. 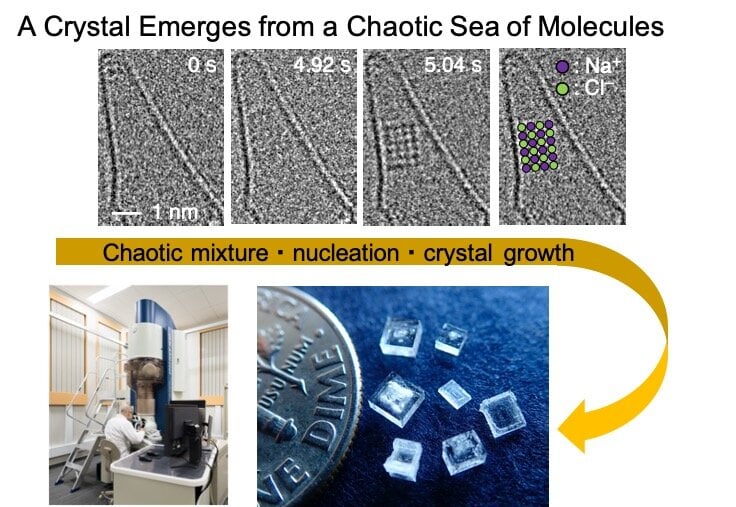 “Salt is just our first model substance to probe the fundamentals of nucleation events,” says Eiichi Nakamura, the University Professor. “Salt only crystallizes one way. But other molecules, such as carbon, can crystallize in multiple ways, leading to graphite or diamond. This is called polymorphism and no one has seen the early stages of the nucleation that leads to it. I hope our study provides the first step in understanding the mechanism of polymorphism.”

As DPReview explains, polymorphism is an important process used to produce various pharmaceutical and electronic components. The full study titled Capturing the Moment of Emergence of Crystal Nucleus from Disorder can be read on the American Chemical Society website.

Image credits: Images and video via the Journal of the American Chemical Society, “Capturing the Moment of Emergence of Crystal Nucleus from Disorder” by Takayuki Nakamuro, Masaya Sakakibara, Hiroki Nada, Koji Harano, and Eiichii Nakamura.