The Hubble Space Telescope in concert with the Atacama Large millimeter/submillimeter Array (ALMA) in Chile found what NASA describes as odd: early, massive, “dead” galaxies that have run out of the fuel necessary to continue to make stars.

NASA says that without fuel for star formation, these galaxies ran on empty and have effectively died. What makes these galaxies curious is that at this point in the lifespan of the universe, all galaxies should be forming lots of stars.

“It’s the peak epoch of star formation,” explained the lead author of the study Kate Whitaker, assistant professor of astronomy at the University of Massachusetts, Amherst. Whitaker is also associate faculty at the Cosmic Dawn Center in Copenhagen, Denmark. “So what happened to all the cold gas in these galaxies so early on?”

Hubble and ALMA worked together to allow astronomers to see these six galaxies. Hubble was able to pinpoint where the galaxies exist by showing where they formed in the past. ALMA then showed astronomers where stars could form in the future if enough fuel were present by detecting the cold dust that serves as a proxy for the cold hydrogen gas. 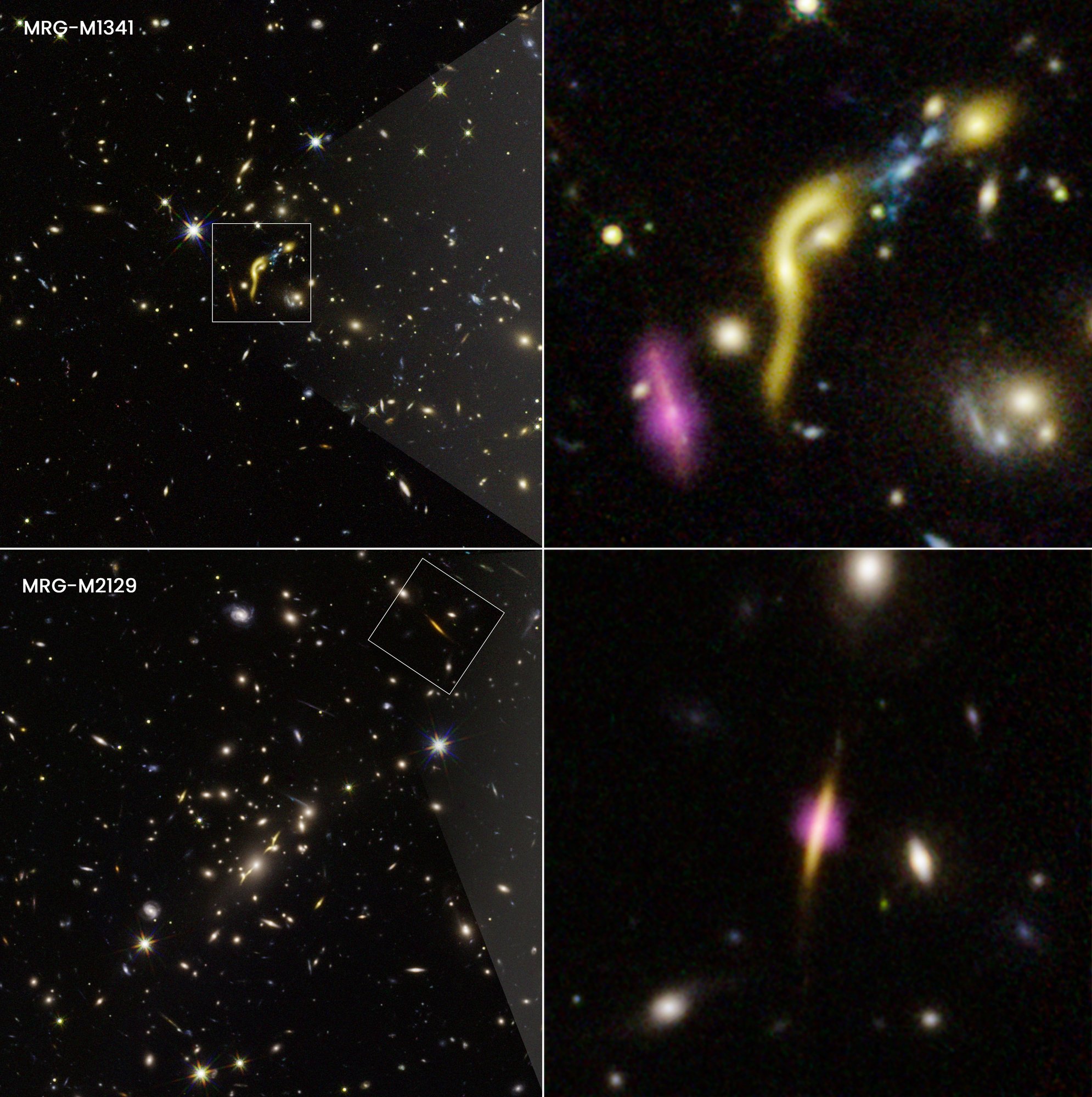 “These images are composites from NASA’s Hubble Space Telescope and the Atacama Large Millimeter/submillimeter Array (ALMA). The boxed and pullout images show two of the six, distant, massive galaxies where scientists found star formation has ceased due to the depletion of a fuel source – cold hydrogen gas. Hubble, together with ALMA, found these odd galaxies when they combined forces with the “natural lens” in space created by foreground massive galaxy clusters,” NASA explains.

In order to capture these images, scientists had to use gravitational lensing, a process that uses the intense gravity of galaxy clusters to warp space and magnify light from background subjects. NASA explains that when an early, massive, and very far away galaxy is positioned behind such a galaxy cluster, it appears greatly stretched and magnified and allows astronomers to study the details in a way that would otherwise be impossible to see.

“The yellow traces the glow of starlight. The artificial purple color traces cold dust from ALMA observations. This cold dust is used as a proxy for the cold hydrogen gas needed for star formation,” NASA continues.

“Even with ALMA’s sensitivity, scientists do not detect dust in most of the six galaxies sampled. One example is MRG-M1341, at upper right. It looks distorted by the ‘funhouse mirror’ optical effects of lensing. In contrast, the purple blob to the left of the galaxy is an example of a dust-and-gas-rich galaxy. One example of the detection of cold dust ALMA did make is galaxy MRG-M2129 at bottom right. The galaxy only has dust and gas in the very center. This suggests that star formation may have shut down from the outskirts inward. Annotated image on the left, unannotated image on the right.”

The astronomers have been able to determine that these sorts of “dead” galaxies don’t seem able to rejuvenate themselves even though they appear to grow larger over time by absorbing the objects around them. So 11 billion years after they formed, these galaxies may grow larger but are still dead in terms of new star formation.

“Did a supermassive black hole in the galaxy’s center turn on and heat up all the gas? If so, the gas could still be there, but now it’s hot. Or it could have been expelled and now it’s being prevented from accreting back onto the galaxy. Or did the galaxy just use it all up, and the supply is cut off? These are some of the open questions that we’ll continue to explore with new observations down the road,” Whitaker says, proposing several possible explanations.