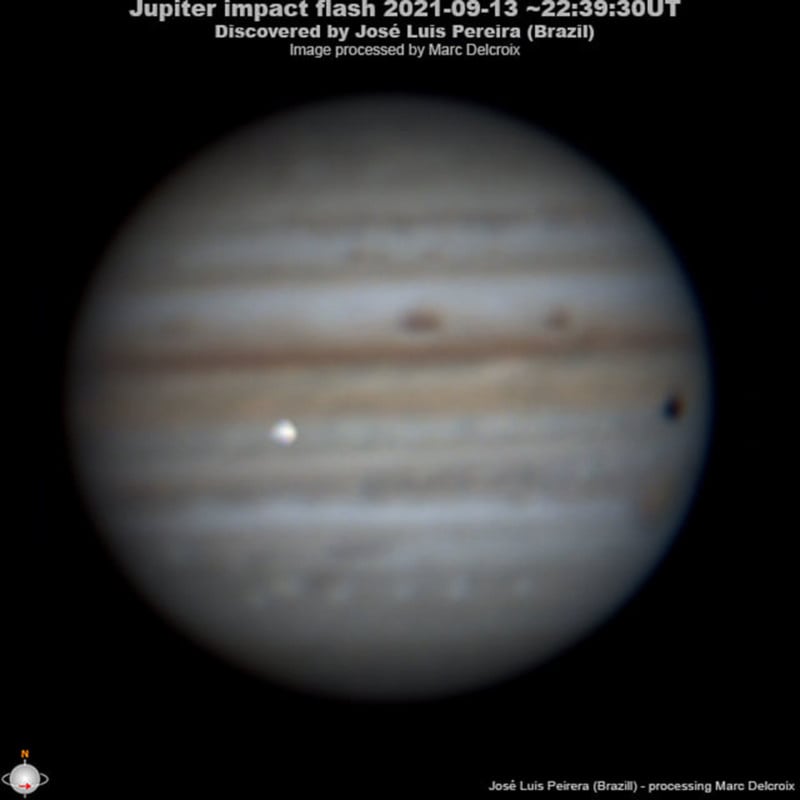 Something massive slammed into Jupiter this week, and a Brazilian amateur astronomer had his camera aimed at the gas giant at just the right time to capture the event.


Earlier this week, astronomy enthusiast José Luis Pereira set up his telescope and camera (a Newtonian 275mm f/5.3 telescope and a QHY5III462C camera) in São Caetano do Sul, São Paulo, Brazil, to shoot images of Jupiter — he often makes observations of planets on nights with clear skies.

While the camera was rolling on Monday night, there was suddenly a bright flash on the planet, indicating that a large space rock had likely slammed into our solar system’s largest planet. The astrophotographer discovered the flash when reviewing the set of 25 videos he had captured for a program called DeTeCt, which tracks impacts on Jupiter and Saturn.

“To my surprise, in the first video I noticed a different glow on the planet, but I didn’t pay much attention to it as I thought it might be something related to the parameters adopted, and I continued watching normally,” Pereira tells Space.com. “So as not to stop the captures in progress for fear that weather conditions would worsen, I didn’t check the first video.”

“I checked the result only on the morning of the 14th, when the program alerted me to the high probability of impact and verified that there was indeed a record in the first video of the night.”

Here’s the video he captured on loop:

Pereira sent his data to Marc Delcroix of the French Astronomical Society and received confirmation that he had indeed captured an impact on September 13th at 10:39 GMT. Pereira was delighted as he had been working to capture an impact for the past several years.

Light on at Jupiter! Anyone home? This bright impact flash was spotted yesterday on the giant planet by astronomer José Luis Pereira.

Not a lot of info on the impacting object yet but its likely to be large and/or fast!

“Not a lot of info on the impacting object yet but it’s likely to be large and/or fast!” the European Space Agency writes in a Tweet featuring Pereira’s capture.

The DeTeCt project estimates that there are about 15.6 impacts on Jupiter every year, or about one every 23.4 days. This particular impact could have been caused by a space rock roughly the size of Big Ben, the famous clocktower in London, England.

“The fireball was fixed in Jupiter’s atmosphere,” writes SpaceWeather.com. “It first appeared at 22:39:27 UT on Sept. 13th and remained visible for a full two seconds. The most likely explanation is a small asteroid or comet striking the giant planet; an asteroid in the 100m size range would do the trick.”

Here is an image obtained by Rico and myself 1hr after the impact event. The site is clearly resolved and no visible scar was left (just as with previous impact flash events.) The object was probably too small to reach the deeper atmosphere. https://t.co/gQGewHR93U pic.twitter.com/IME2LLj3L1

“The site is clearly resolved and no visible scar was left (just as with previous impact flash events),” Tweets astrophotographer Damian Peach. “The object was probably too small to reach the deeper atmosphere.”

Image credits: Photo and video by José Luis Pereira and used with permission