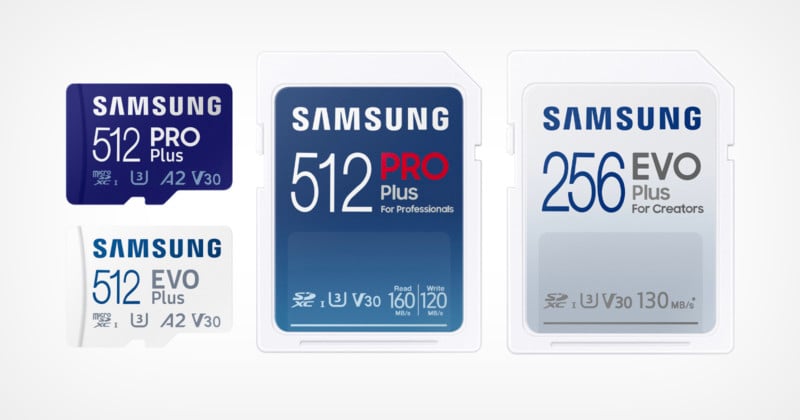 Samsung has announced a new line of memory cards that it says are designed for content creators who are capturing 4K ultra-high definition (UHD) videos as well as photos.

The new batch of microSD and SD memory cards are the Pro PLUS and EVO Plus targeted directly at professionals and enthusiast content creators.

According to the company, the new line of memory cards have been optimized for professional use with faster read and write times over the company’s previous cards which allow for what it describes as much smoother recording when shooting in 4K UHD and Full HD (FHD) videos. The cards claim a 30% faster performance than the previous generation, which Samsung hopes makes them ideal for current ultra-high-resolution systems.

The company states the cards have increased durability, have a storage capacity from 32 GB to 512 GB, come with a 10-year limited warranty, and “provide ample storage for 360-degree photos, hours of 4K UHD helmet camera and aerial drone video capture, and more.” 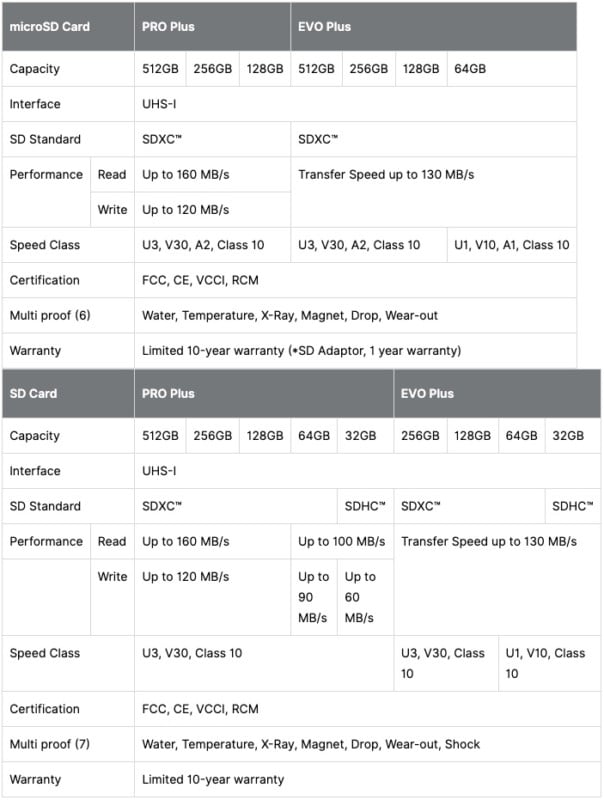 The new PRO Plus and EVO Plus microSD cards offer what Samsung dubs “six-proof” protection, which means that they can withstand water, extreme temperatures of -25-degrees to 85-degrees Celcius (-13-degrees to 185-degrees Fahrenheit), X-ray, wear-out, drops, and magnetic impact. The new microSD cards have a video speed class rating of V30 and an application performance class of A2.

The new PRO Plus and EVO Plus full-size SD cards take the protection up further with what Samsung calls “seven-proof” protection against water, the same extreme temperatures, X-ray, wear out, drops, and magnetic impact like the microSD cards, but also adds shock protection.

The difference between the PRO Plus and Plus models comes down to the speed of the cards. The EVO Plus cards have a rated transfer speed of up to 130 MB/s and are vary between V10 and V30 depending on capacity. The PRO Plus cards are all rated for at least V30 performance and promise varying read and write speeds, with the highest 256 GB and 512 GB options hitting 160 MB/s read speeds and 120MB/s write speeds with the lowest 32 GB capacity only promising 100 MB/s read speeds and 60 MB/s write speeds.

It should be noted that many modern cameras require a video speed class rating of at least v60 and some even v90 in order to successfully record high-resolution 4K video, so it is important to check the requirements of each specific camera before purchasing memory cards.

Samsung has also revamped its branding and the designs have been “reimagined” with a blue and white colorway (which the company says separates them from the previous generation of the memory cards which were red, black, and white) and are available for purchase from the Samsung store. The cards range from $9 for the 32 GB size up to $115 for the 512 GB size with an optional card reader. The pricing for the PRO Plus SD cards was not revealed as they will be available later this year.