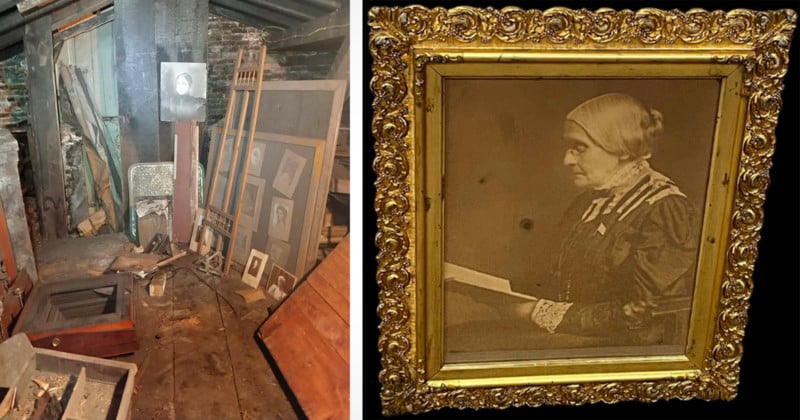 In February, David Whitcomb discovered an attic full of photographic treasures in Geneva, New York. Identified as the hidden studio of photographer James Hale, multiple rare photos — including one of Susan B. Anthony — were discovered. After six months, the full collection has finally been cataloged.


Discovered in the attic of a building he purchased for his law firm, Whitcomb stumbled across a trove of historical treasures including multiple portraits of Susan B. Anthony — a notable woman’s suffrage leader — among other artifacts from a bygone era. Whitcomb tells PetaPixel that after laboring for the last several months, the entire collection is now online to be viewed and explored ahead of a public auction that will take place on September 18.

The prices listed on the website are just to establish an opening bid, and Whitcomb says that he decided not to have any of the pieces officially appraised and has decided to let the market tell him what the items are worth.

“It’s difficult because there’s simply nothing like it,” Whitcomb tells PetaPixel, describing the entire find. “Almost the full contents of a turn-of-the-century photography studio, which happens to contain photos of Susan B. Anthony and other suffragist leaders, there’s just nothing to compare it to, unlike say if you found a signed Babe Ruth baseball, you could come up with a comparable value online.”

The total collection contains 350 individual items of varying interest. From portraits of unknown gentlemen, to a photo of a toddler in a dress, to a circa 1880 Samuel Peck Compay negative printing contact frames, the collection is diverse in both photographic art as well as anitique equipment.

Whitcomb points to a few particular items that he is most excited about. 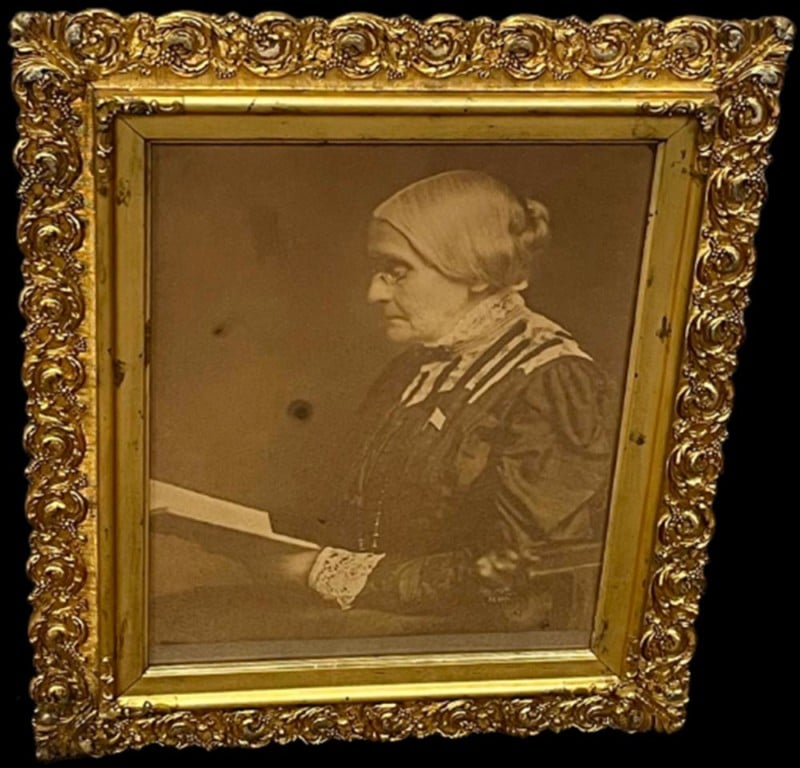 “This is the photographer’s copy which would have been on display in his studio to impress customers at the height of his prowess and her fame,” Whitcomb says. “If you look at the description of Lot #200, the photo, you can read all about the history and why we are in love with this.” 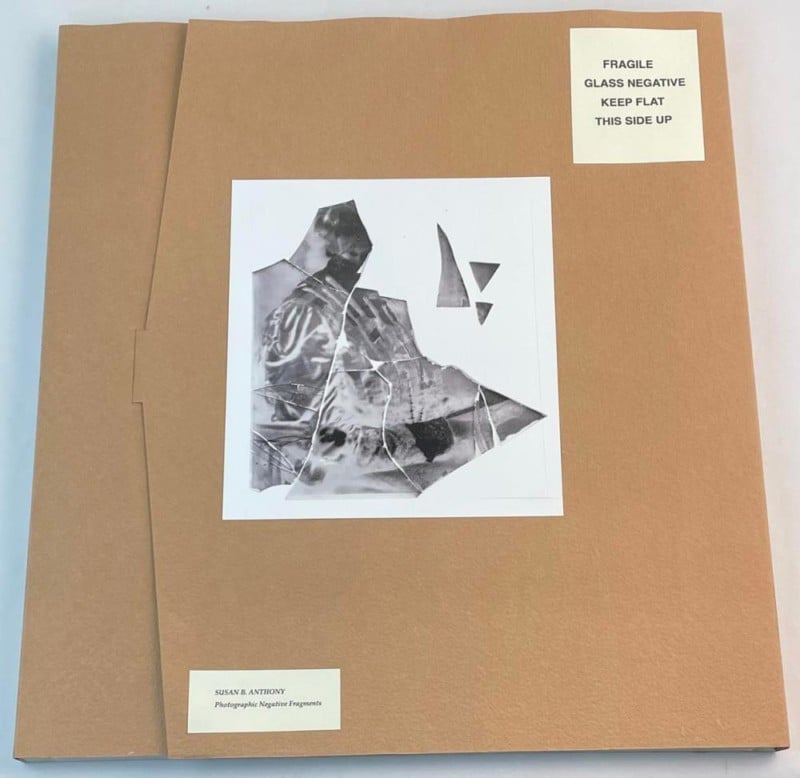 “This one is the holy grail to me of this find,” he says. “I feel that way for all of the reasons above, but this glass plate IS the image, it was in the room with Susan B when her photo was taken and it’s like seeing her ghost in the glass. Once in a lifetime find.”

Whitcomb says that everyone involved with the cataloging of the find is in love with this particular item, which he says stems from how fascinating of a piece it is.

“It was made by the Arc Printing Co. Racine Wis and it was used by J.E. Hale for advertising purposes,” Whitcomb explains. “It has the original label on the inside to show some examples of how it is used and instructions for use. After researching the company, there are none known to exist on the open market, which makes it very rare — we don’t believe any others exist.

It is a hand-held ink print stamp that would have been placed on bridges, buildings, paper (for signs), and anywhere else that it could be rolled for the sake of advertising.

“We had some experts from Kodak use the proper ink and recreate the print on special paper, which you can see in the photos,” Whitcom says. 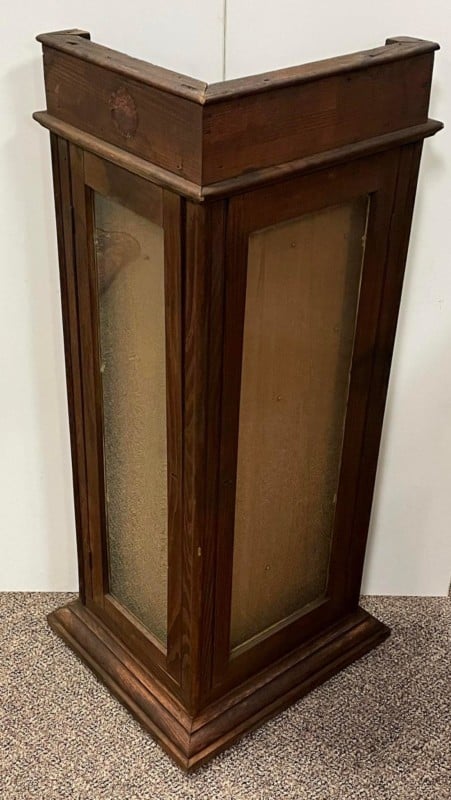 “This rare street corner display was used by Mr. Hale to display and lock some of his photographs outside of his studio at the nearest corner,” Whitcomb says. “We don’t have the key to open it, but you can see the thumbtacks used to hang his photos. It’s in excellent shape, and there’s a label but we can’t really read it. It is a very interesting piece and extremely rare.

“In fact, the folks at Kodiak told me they’ve seen this in period brochures to order, but that they’ve never actually seen one in the real world so we’re excited for how rare this find may be.”

Whitcomb says that there are several backdrops from Hale’s collection that are spread throughout the auction, but specifically, a hand-painted canvas scene of an outdoor forest scene is in remarkably good condition. Similarly, another of a hand-painted indoor scene is in what Whitcomb describes as in perfect shape. 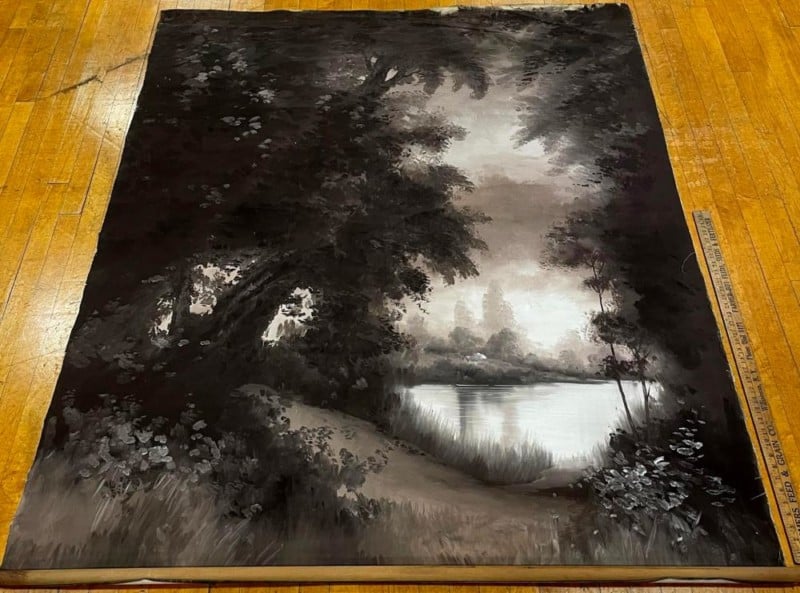 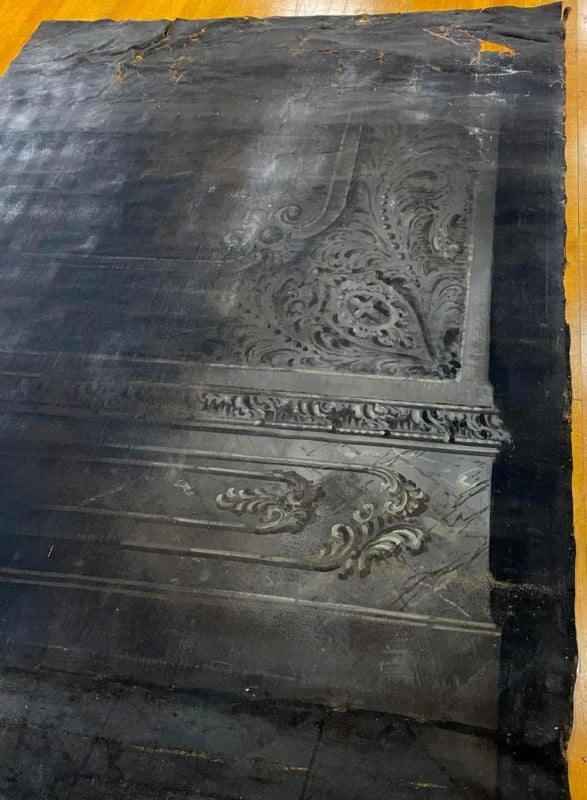 “It’s amazing the number of backdrops we found in the attic, all rolled up and piled together in a corner, which helped them stay in great shape over a century and survive the fire in the building next door which covered most of the materials with silt from the charred roof of the building,” Whitcomb says.

He believes the indoor scene is much older, as it shows the pattern of the floor that it would roll over and more wear from chairs and customers who had their picture taken on it.

Photo and Glass Plate Negative of the Shore of Canandaigua Lake 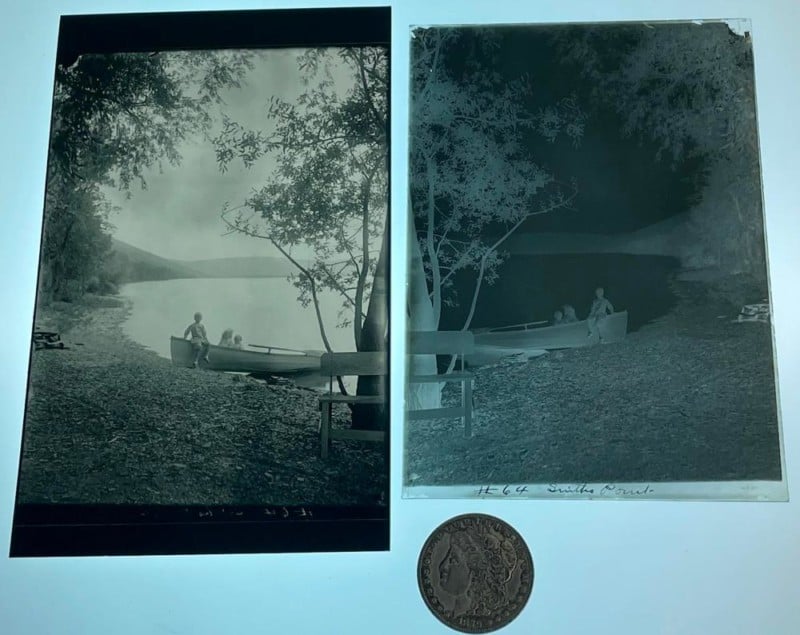 One final piece that Whitcomb pointed to is more interesting to him personally, as it depicts Canandaigua Lake where he lives.

“The crazy thing about this glass plate is that I’ve seen this image before in my lifetime. There’s a poster that says ‘Canandaigua Lake’ of this very picture that you see in various restaurants and shops in town,” he says. “Turns out that this image is by J.E. Hale, it was turned into a postcard which later was blown up into a modern poster. And I found the glass plate negative of it in an attic in Geneva. Crazy to think about and it is a personal favorite from this find.”

The full collection of items found in Hale’s studio can be perused through the One Source Auctions set up by Whitcomb. To see original images of that attic as he found it, check out PetaPixel’s original coverage here.