Photographer Anna Isabella Christensen has been working on a series of self-portraits over the last four years but has spent the last several months working specifically in Iceland, capturing dramatic images near the erupting volcano there.

The diverse Icelandic landscape has been a huge boon of inspiration for Christensena, and contrasting the volcanic lava with a dramatic flowing dress has created a set of images that manage to make unique images out of an area that has been photographed extensively since the volcano started erupting earlier this year.

Christensen says that she arrived in Iceland for the first time near the end of January 2021 and not long after she got there, a large number of earthquakes started to take place on the Reykjanes peninsula not far from the capital Reykjavik. The volcano finally started to erupt in March and Christensen says she stayed in the area of the volcano on three separate occasions and ended up hiking to the volcano 25 times to create this series. 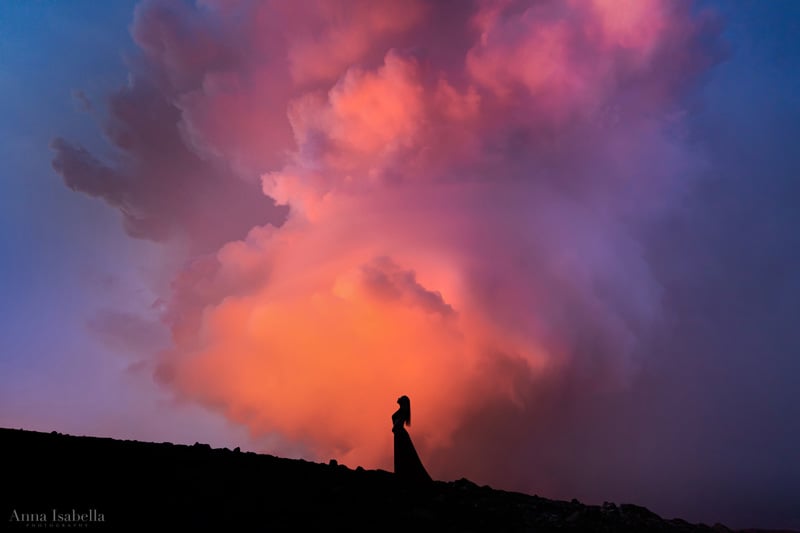 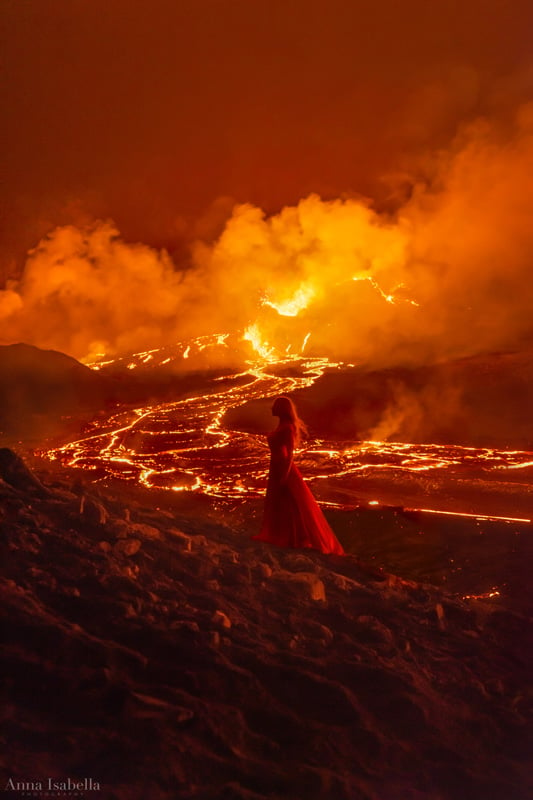 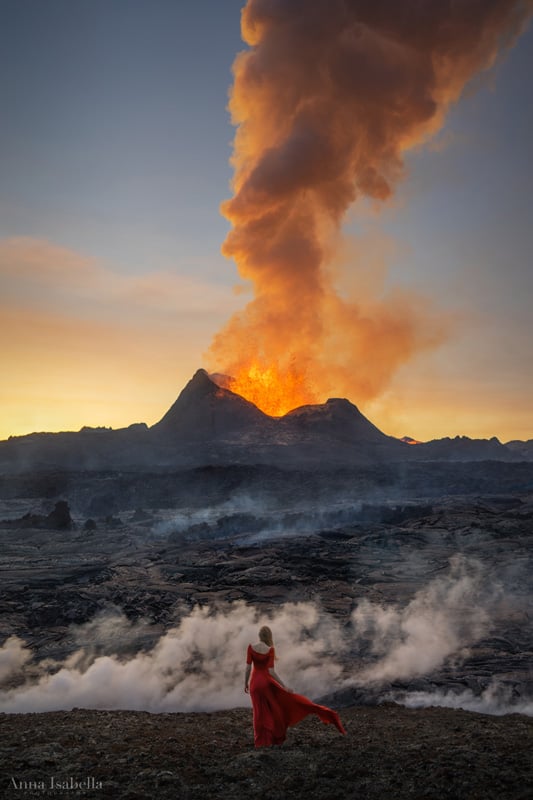 “It all started with one crater, then some new fissures opened up and there were several active craters at the same time, and it ended with one big crater and huge explosions every few minutes,” Christensen says. “This eruption is the most incredible thing that has ever happened to me and no words can describe how it felt to be there and witness all this power and beauty. I’m very grateful for this experience and feel very privileged to have spent so much time there.”

Christensen says that the conditions at the volcano were extreme, making it a particular challenge to use as the backdrop for her series.

“A lot of the time and it was very, very cold,” she says. “I experienced all kinds of weather there: snowstorms, hail, rain, extreme wind, I even got caught up in a small dust devil once — there were a lot of those. One time there was ashfall coming down. Despite these conditions, the eruption site was open to the public almost all the time, with the exception of a few days.” 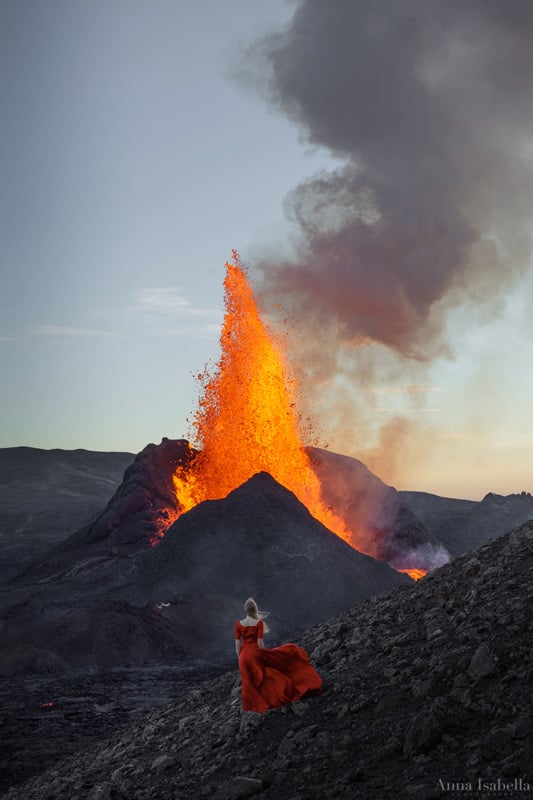 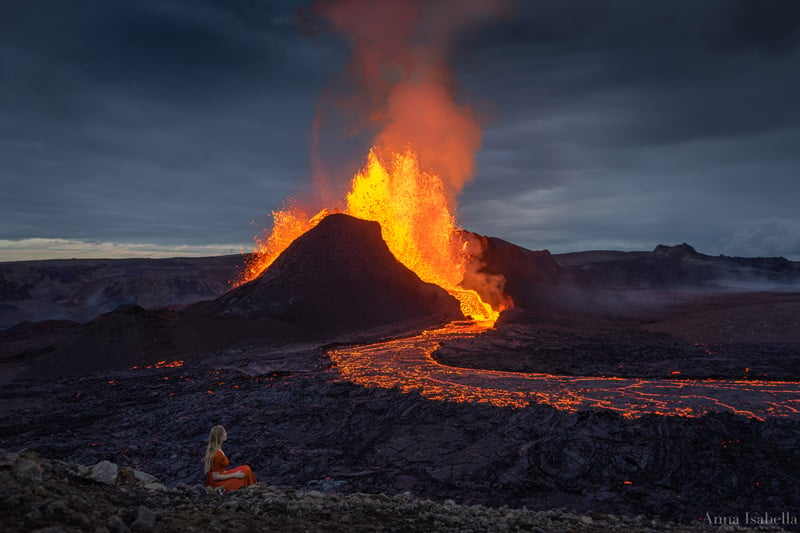 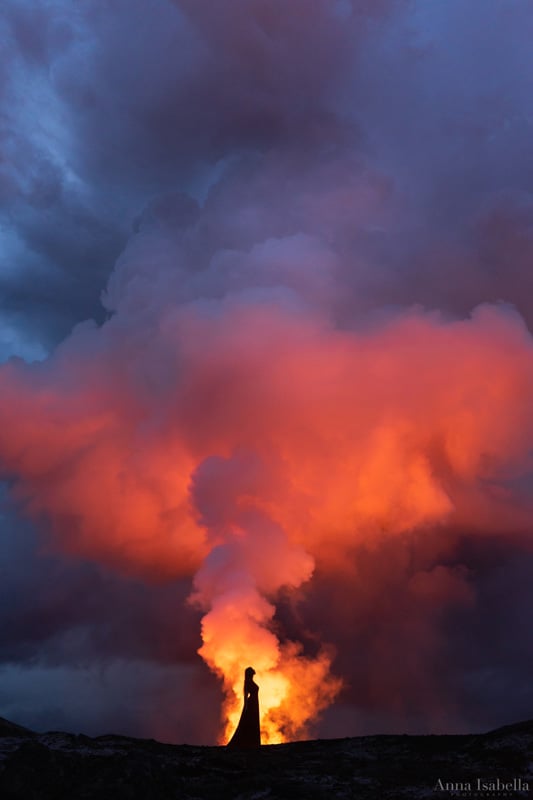 That said, Christensen says that as far as safety is concerned, the eruption site is officially open to the public and therefore deemed as safe by the Icelandic authorities. All the photos were taken from a safe distance and all the necessary precautions were taken during the photoshoots including measuring gas levels and considering the direction of the wind.

Due to the extreme conditions and cold, Christensen says she was only able to do one photoshoot per time she visited the eruption site at most, and several times she was not able to shoot at all.

“Some of the times I hiked all the way to the volcano only to find that the weather was too extreme at the viewpoint for my type of photos — mostly because of the strong, freezing wind — and I would just go back to the hotel,” she explains.

The repeated, often blind, hikes were necessary as planning was difficult.

“The eruption was changing every day and it was hard for me to do much planning. I was fascinated by seeing the volcano at sunrise and sunset, blue hour, and in the dark, as the lava was glowing during those times. I ended up hiking there at night and staying until sunrise because there were huge crowds of people there at any other time,” she explains. 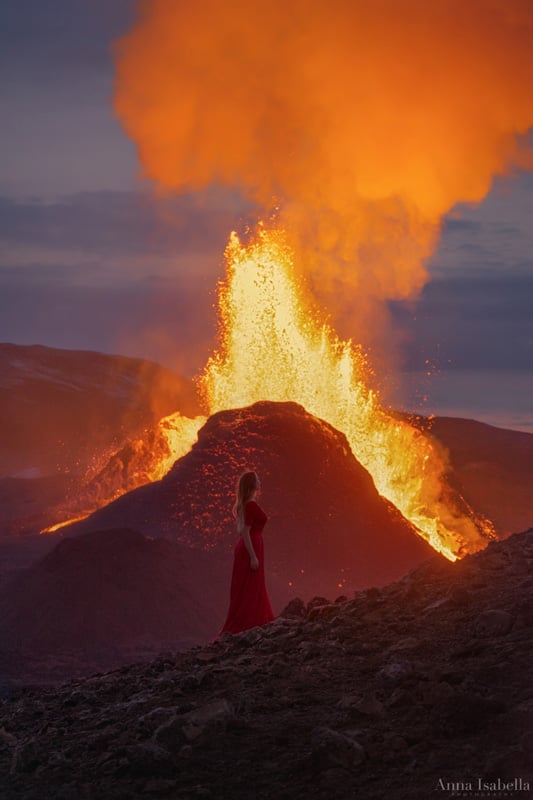 “I really prefer to be alone during my photoshoots and also I wouldn’t be able to find a place there without other people in my frame. It was also an incredible feeling to witness the volcano when there were only a few other people there and it was so quiet. Since I was only able to do one photoshoot per visit, I would sometimes get ideas for the next day and then try to implement them, which worked out for a few of my shoots. Most of the shoots were just ideas that I got after arriving at the eruption site depending on how it looked that night.”

All of the photos in the series are self-portraits, and Christensen says they are original and not manipulated. She shot the photos by setting up her camera on a tripod and firing it remotely with her phone, except in one case she used her camera’s built-in intervalometer.

“My idea was to capture the connection between a human being and an erupting volcano and show my fascination and admiration. I thought that my red dress would be a good fit for the fire energy of the volcano,” she says. 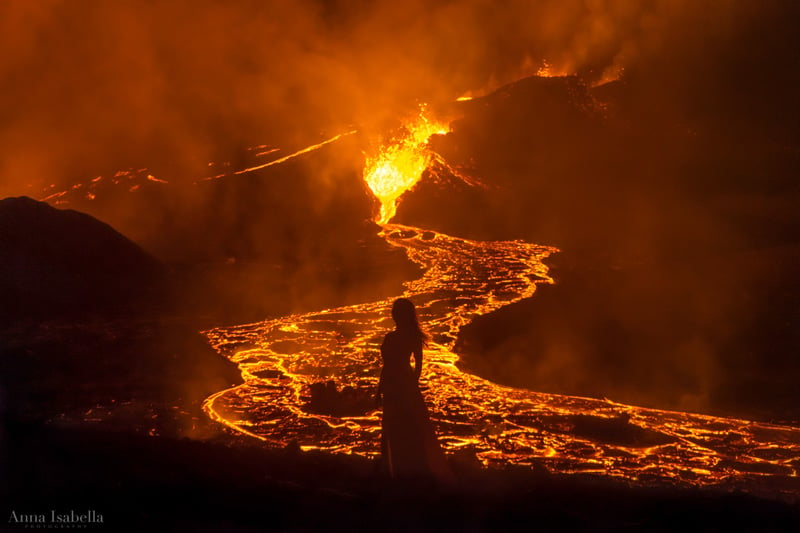 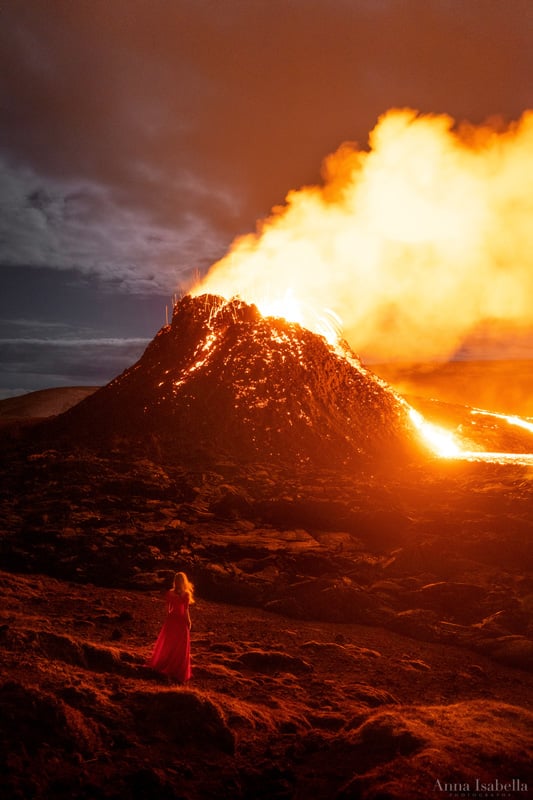