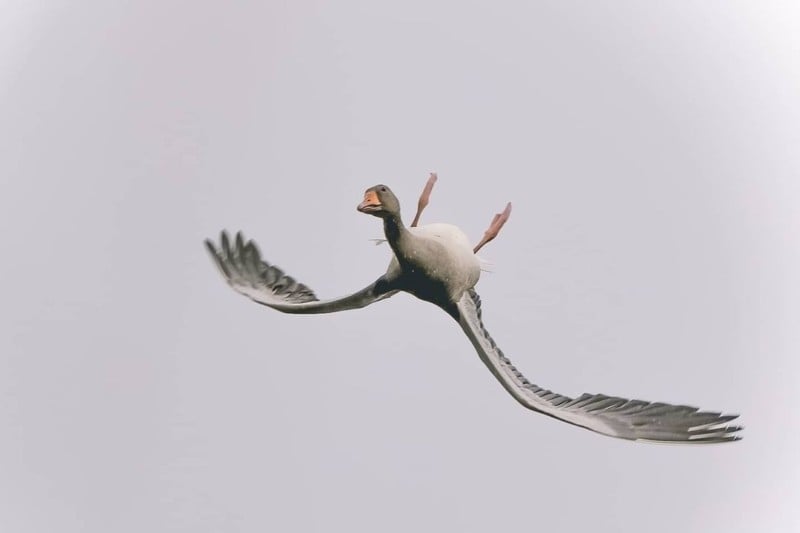 Here’s a curious photograph that’s turning heads online: a Dutch photographer managed to catch this goose flying with its body upside down and its head right-side up.


Amateur photographer Vincent Cornelissen was shooting wildlife back in March near the town of Arnhem in The Netherlands when he noticed the goose flying strangely in the choppy weather.

“The weather was bad, so I put on my waterproofs and sat with my back against a tree looking over a lake,” Cornelissen tells KJZZ. “I saw that one of the three had trouble flying in a straight line. He was having a hard time which I thought was because of the wind. He seemed to be struggling, so I took some pictures of him.

“I immediately realized that I had captured something special, but at the same time, I was afraid that no one would believe me. The image looked like it was edited in Photoshop.”

The bird wasn’t flying for a long time upside down — bird wing aerodynamics wouldn’t allow for that. Instead, Cornelissen captured a bird maneuver called whiffling that has been observed in several bird species.

It’s when a bird rapidly descends to the ground in a zig-zag flight path, sometimes briefly turning its body upside down and using its wing aerodynamics to accelerate its journey.

“As a mechanical engineer who learned Bernoulli’s theorem and aerodynamics, I could easily understand why this goose turned down against strong wind for landing,” mechanical engineer Alpay Lök tells Cornelissen on Instagram. “Because the wings have the [aerofoil] shape, it was creating lifting force. But when it turned down, [it] created down force, same way spoilers of F1 cars. This picture will be very useful for the engineering students.”

The acrobatic maneuver resembles a falling leaf, and birds may use it to land faster or to avoid predators in mid-air. But there may be another reason why birds whiffle: to show off.

“Once young geese have mastered flying, they start to see what is possible and how far they can go,” Dutch wildlife photographer and conservationist Lars Soerink tells KJZZ. “They [could] do it to brag to their peers. Like, look at me!”

You can find more of Cornelissen wildlife and nature photography on his Instagram.

Image credits: Photograph by Vincent Cornelissen and used with permission