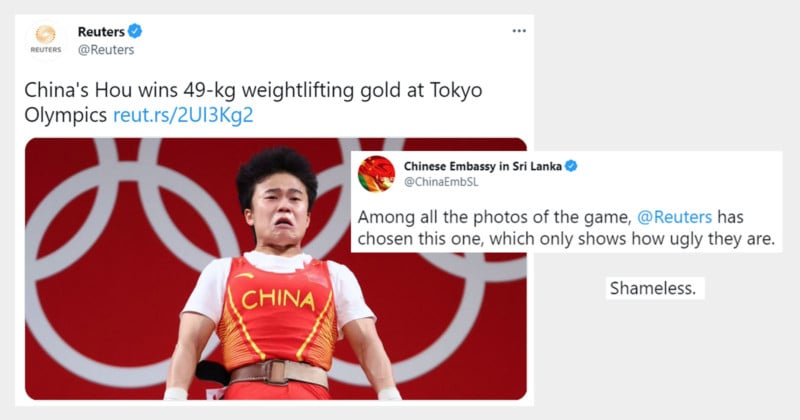 After the 24-year-old Hou won the women’s 49-kilogram event at the Tokyo 2020 Olympics on Saturday, the international news agency covered the win in an article that featured a lead photo by Mexican Reuters photographer Edgard Garrido.

The agency’s Tweet about the article featured the same photograph (albeit cropped in a way that removes the bar): 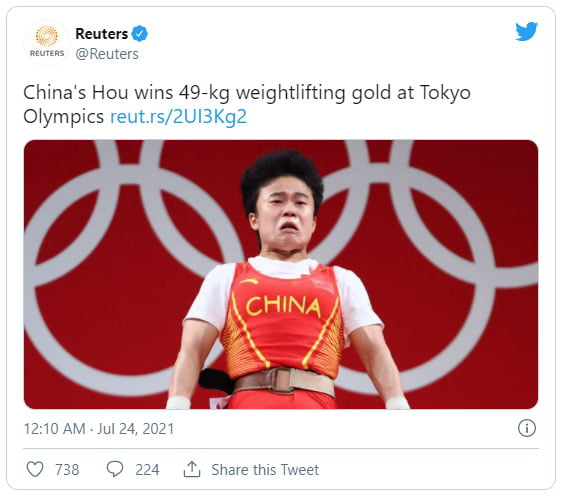 The Chinese Embassy in Sri Lanka immediately responded with indignation, questioning why Reuters chose this particular photo from among all those captured of Hou during the event and medal ceremony: 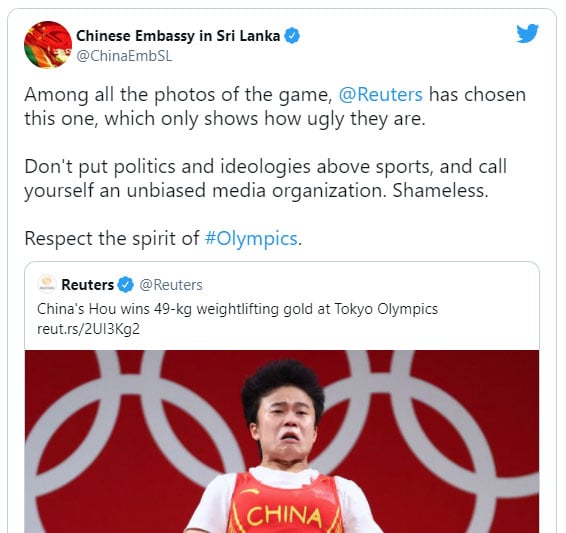 “Among all the photos of the game, @Reuters has chosen this one, which only shows how ugly they are,” the embassy writes in a Tweet. “Don’t put politics and ideologies above sports, and call yourself an unbiased media organization. Shameless.

“Respect the spirit of #Olympics.”

The Global Times, the daily newspaper that’s often referred to as the mouthpiece of the Chinese Communist Party, followed up with a response of its own: 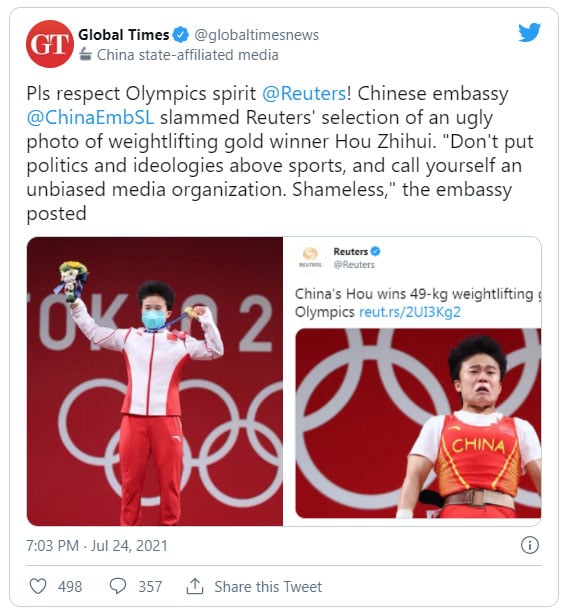 “Mainstream Western media organizations like CNN and Reuters have been caught unfairly targeting China during their Tokyo 2020 Olympics coverage, prompting condemnation from Chinese netizens and embassies,” the Global Times writes in an article. “The [Reuters] photo captures the moment Hou was lifting a barbell with a struggling face [and] has been widely regarded as disrespectful to the athlete.”

Many Western netizens defended the Reuters photo, arguing that it’s a standard weightlifting action photo that isn’t “inappropriate” or “ugly” at all. Some even accused China of hypocrisy after they noticed that Chinese state-run news outlets ran similar photos.

China Daily, a newspaper owned by the Publicity Department of the Chinese Communist Party, reported on the win with a comparable photo of Hou in the middle of a lift: 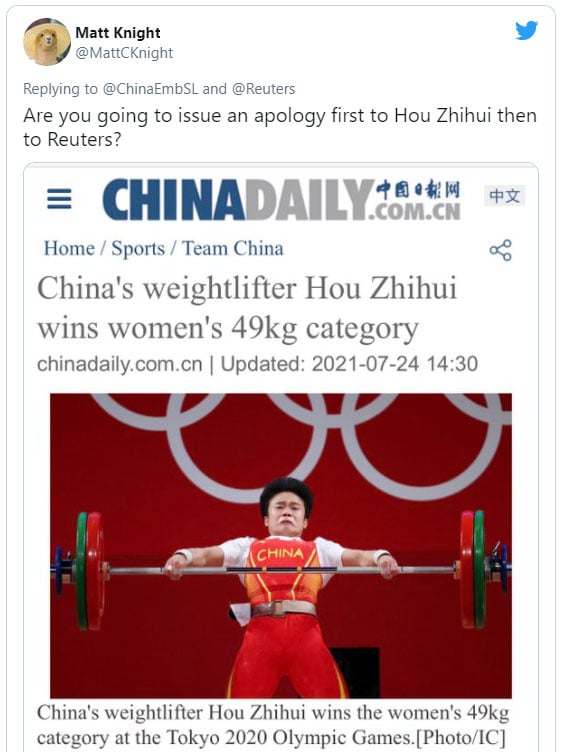 The paper has since (quietly) swapped out its original image of Hou for a much more flattering photograph.

Other netizens noticed that the embassy itself had shared photos of male Chinese weightlifters with similar strained expressions: 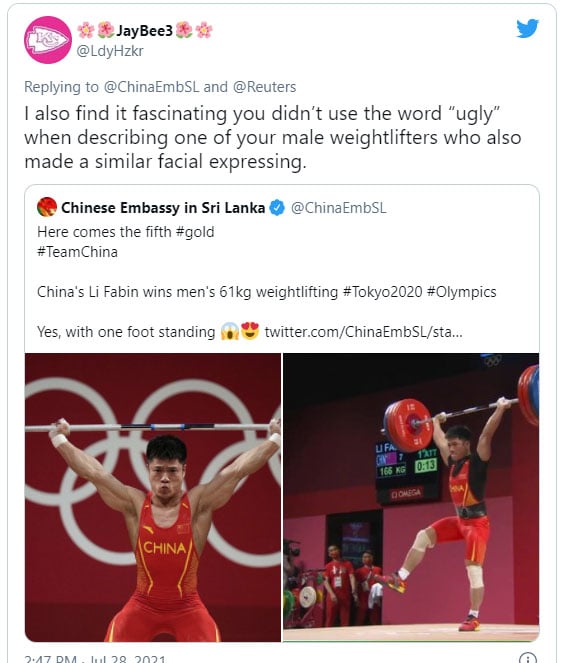 The embassy, however, doubled down on its take, Tweeting out comparisons between the photo of Hou and other Reuters photos of “white westerners”: 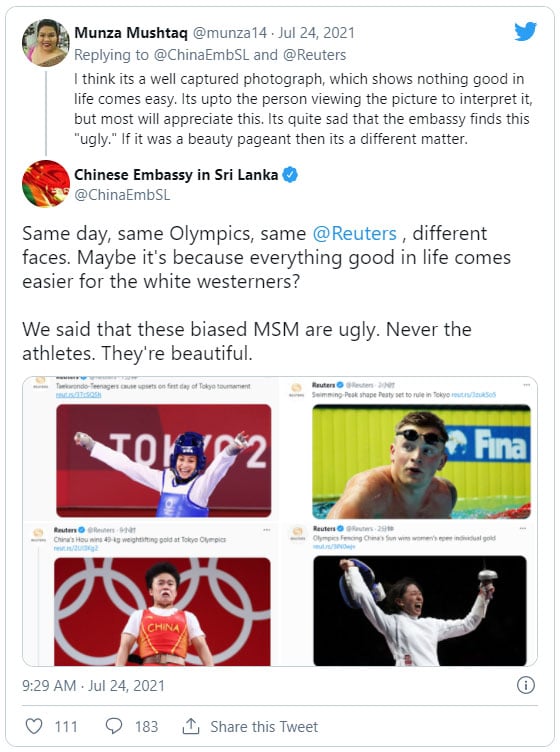 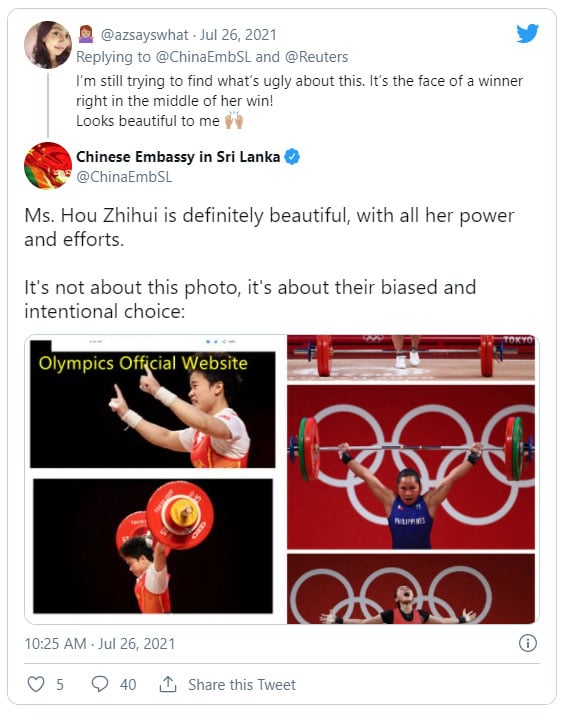 “We said that these biased [mainstream media] are ugly. Never the athletes. They’re beautiful.

“It’s not about this photo, it’s about their biased and intentional choice.”

Instagram Pivoting to Video As it Transforms into a ‘Metaverse’ Company