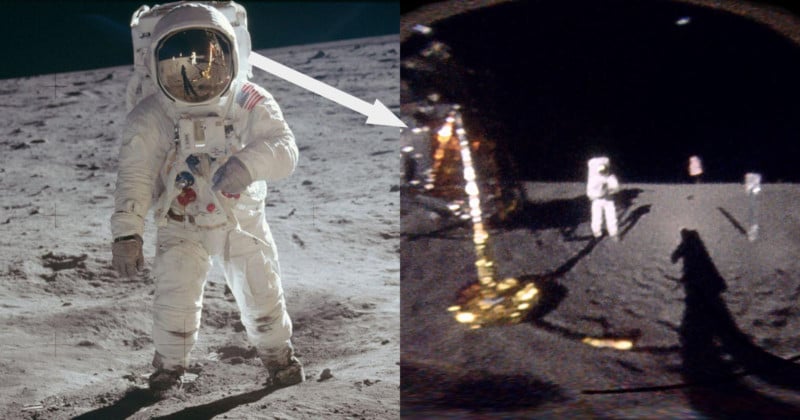 Artist Michael Ranger recently had the idea of “unwrapping” the reflection seen in the visor of NASA astronaut Buzz Aldrin in an iconic photo captured by Neil Armstrong during the Apollo 11 mission. The result is an image that reveals what Aldrin saw the moment the photo was snapped.

The Idea of Unwrapping the Buzz Aldrin Moon Photo

Ranger, a visual effects artist based in Los Angeles, says he initially realized how his experience in visual effects could be applied to this kind of unwrapping experiment.

“The reason I had the idea to do this and knew how to easily do it was that in visual effects we use mirror balls to take 360° HDRIs of an environment and then use those images to apply photo-real lighting and reflections to CG content and place that content into real footage,” Ranger tells PetaPixel. “I realized that the spacesuit visor is basically a mirror ball, minus a bit of information on the sides.”

After sharing an initial result on Reddit (where it went viral), Ranger was tipped off to the fact that ultra-high-resolution scans of NASA photos, including this classic Armstrong one, are available online. The raw version of this particular scan weighs in at a whopping 1.3 gigabytes.

How the Buzz Aldrin Moon Photo was Unwrapped

Ranger took the spherical reflection seen in the visor, sharpened and color corrected in Photoshop, and turned it into this panoramic 360° image: 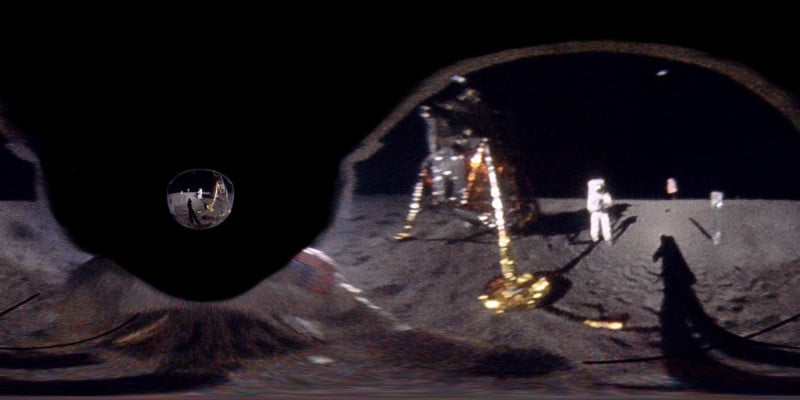 “The visors of the spacesuits are coated with gold, so I color corrected the gold out of it using the full photo as a color reference to the real world colors,” Ranger writes. “I also added more room in the initial photo crop around the edges of the visor so that when it was unwrapped it would more accurately account for the space in the final 360° image that represents the inside of his helmet. Notice the pale blue dot.”

The photo shows a clearer view of Armstrong standing next to the Eagle lunar lander operating the chest-mounted Hasselblad camera. The “pale blue dot” of the Earth is seen in the upper right of the frame.

This image can be viewed in a 360° photo viewer — there are various apps out there you can use, but you can also open it in Google Street View.

Ranger also made this video in which we get to “look around” from Aldrin’s point of view:

Unwrapping the Reflections in Other NASA Photos

Ranger has since been applying this same concept to the reflections seen in other NASA photos, including climbing down the ladder to the Moon on Apollo 12:

…and the very first NASA spacewalk on the Gemini 4 mission: