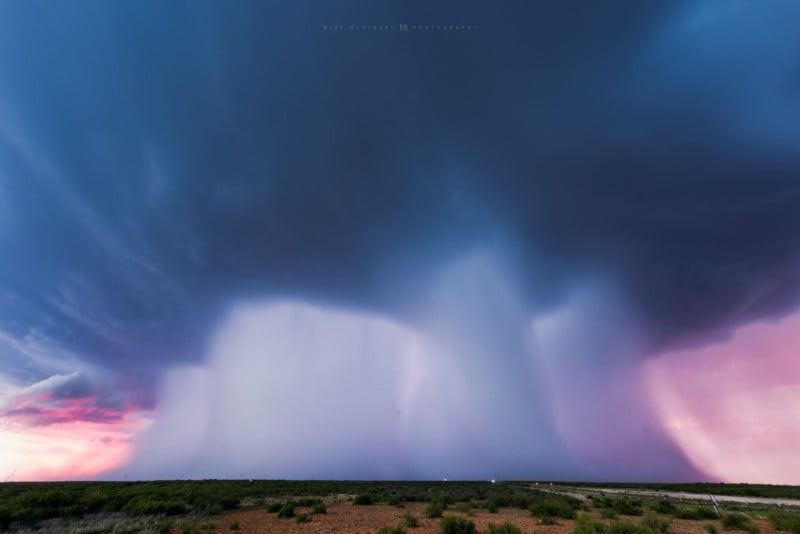 Storm-chasing (and wedding) photographer Mike Olbinski was hunting for crazy weather phenomena to capture at sunset early this month when he was treated to a stunning sight: a quadruple microburst in which four columns of hail and rain were being dumped onto the landscape below.

Olbinski was running a storm-chasing tour on June 1st, with two guests in tow and his friend Brett Wright assisting.

“It was one of those days where the outlook was marginal, meaning no tornado chances, maybe not much of a chance of even a photogenic supercell,” Olbinski tells PetaPixel. “On days like that, if I didn’t have a tour group, I may have been home in Phoenix. But that’s half the reason I do them, so I’m out there for everything, not missing the huge surprises or the moments you aren’t expecting.”

After failing to find anything photo-worthy in New Mexico, Olbinski and the group were en route to Lubbock, Texas, to watch some basketball, grab some dinner, and rest up for another hunt the next day. But on the way, they kept their eye open for storms on the horizon, and one caught their eye just north of Andrews, Texas.

There was an “awesome wall cloud on it, the towers looked amazing, so we switched back into chase-mode and got on the south side of it, just desperate for something resembling a supercell to shoot at sunset,” Olbinski says. “What we got was what felt like total insanity.”

As the storm unfolded in front of their eyes and cameras, the photographers’ jaws began to drop.

“We found a great elevated area to shoot, the storm was perfectly moving south towards us and just started dropping hail/rain downbursts like crazy,” Olbinski says. “First the left edge was dumping, an awesome rain foot kicking up, and the setting sunset colors blasting through it. But then we realized we had two monster downbursts ongoing at the same time and it was incredible!

“However, as things happen fast, it was only a matter of less than a minute when microburst/downdrafts started happening on the right side too, and suddenly we had these four columns of hail/rain dumping right in front of us.

“It was just spectacular in person, with the colors of the storm and the orange/pink tones of the sunset. It was exhilarating.”

The above photograph was captured with a Canon R5 mirrorless camera using a Canon 11-24mm f/4 wide-angle lens (with an EF-to-R adapter). Olbinski also captured the storm on video:

“The colors are true to life… even the blues have been desaturated a little, because adding contrast actually made the image way too blue,” Olbinski says. “But standing there and after, we all agreed we’d get a lot of skeptics and comments about it looking fake or overprocessed, but it really wasn’t. All four of our images of the storms, from a variety of cameras, all looked like this.”

Yesterday happened so fast right in front of me, I just couldn't believe what I was seeing. It looked so surreal. Otherworldly. South of Andrews, TX. The Four Pillars of Pain. #txwx #weather pic.twitter.com/zBXBvo029o

“It was one of those moments where I was thankful to be out there chasing and blessed to have an amazingly supportive wife and kids who keep me going,” Olbinski says.