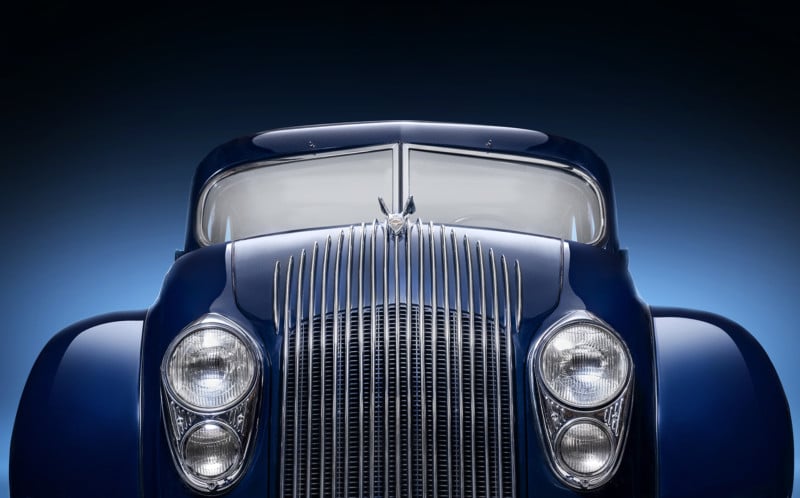 It wasn’t that the phone hadn’t rung for an entire year, it was that the shoots were always too risky; my urge to be on set was always overruled by my commitment to ensure that making art did not lead to someone contracting COVID.

Yet once the vaccine began to make things safer, I knew that it would only be a matter of time before I was behind the camera once more, and with that I wanted it to be an automotive photo shoot. In a way, it was like dipping your foot in to test the waters before taking a plunge by putting a celebrity or athlete in front of the camera.

Little did I know that my first job back would have me photographing a 1934 Chrysler Airflow; a car that finds its place in the hearts of the super eclectic. Lucky for me, one of those eclectic few happened to be none other than Jay Leno. This actually presented the right set of variables that would just so happen to work in my favor. First, it was in Burbank, so a short — albeit miserable — flight was all that I had to take to get to the location. Second, I have worked for this particular client for nearly 15 years. This made producing the shoot without a client on set (as they weren’t vaccinated yet) entirely feasible for we knew each other’s creative approach quite well. In the weeks leading up to the shoot, I researched the car as much as I could. However, when dealing with a car as rare as this one, the best information available was actually the YouTube video that Jay had previously made with it. In reviewing his footage, it was obvious that the Airflow’s curves and lines were very appropriate to the period it was created in, making it a rather difficult car to light. Modern cars have sharper creases and folds in the metal that take in lighting in a crisp way that is forgiving to the photographer. Unfortunately, a certain variety of older cars like the Airflow are more rounded due to the machines that were available to the manufacturers at the time. This changes the approach of the photoshoot to higher and larger diffused sources that are complemented by narrow background lights to define the car’s form. This updated approach would end up being the photoshoot I needed to get back in the groove of producing campaigns again, as the challenge of lighting such a unique car proved both exciting and nerve-wracking. 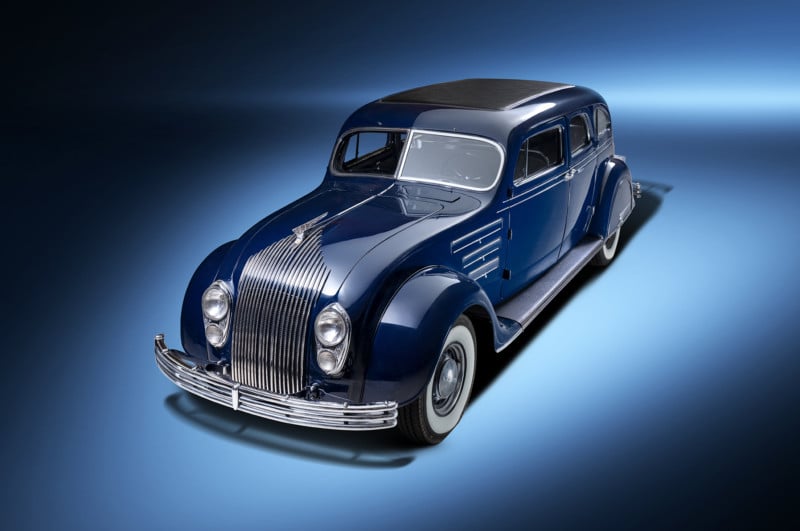 To add fuel to the fire, this would also be the first time that I would be shooting with the Nikon Z 7II. Not only did I need to learn the camera, but with it arriving the night before my flight, I found myself setting it up on the 45-minute plane ride over. It turns out that having worked with so many Nikon bodies before, it was a rather seamless transition to their newest mirrorless system. The leap of faith for me came down to the glass. I am a fiend for shooting 24-70mm lenses, so much so that I packed the f/2.8 S and f/4 for this one. However, in a challenge from the good folks at Nikon, I took both the 14-24mm f/2.8 S and 70-200mm f/2.8 S lenses with me to broaden the options for compression. Having never seen the car in person, this seemed like some additional insurance just in case I needed to present additional options to the client. It turns out that this ended up being a great choice, I was able to utilize all three 2.8 lenses in the piece. The images selected by the client also included options from all three, making this the first series that I’ve done with multiple lenses in many years. One thing I do have to mention is that during pre-light the day before the shoot, I took a very short Uber to Jay Leno’s Garage as it is just minutes away from Burbank Airport. In the collector car world, Jay’s Garage and the remarkable cars it houses is just as famous as Jay himself. With over 150 cars and 175 bikes, the staggering collection takes a decent amount of time just to walk through.

When arriving at the garage, I was met by the man that manages the day-to-day operations for Jay. Over the next hour, he toured me around every room, each packed to the brim with jaw-dropping cars, motorcycles, and even a full-size steam engine. After we had seen the last car, we discussed the next day’s photo shoot and what time I would be showing up. At that point, I requested an Uber to take me to the hotel so that I could rest up for the long day ahead.

No sooner than I had pressed the “request” button on the app, Jay Leno himself walked up. He asked how I was and what I thought about the collection. To be honest, I was a bit caught off guard by how much he cared to hear my thoughts. I told him that I appreciated the collection, not for any marque or car that was in it, but for the glimpse inside the mind of the man that had collected it. His response still floors me to this day. He appreciated my view so much that he then asked if he could personally give me a tour. Never have I been so happy to pay an Uber cancellation fee! Over the next few hours, Jay showed me around in what can only be the most hilarious car-related experience I have ever had. I was in tears multiple times by the jokes he was cracking while explaining the ins and outs of individual cars and motorcycles. The man is as brutally funny as he is knowledgeable about automobiles. To a level that is almost Rain Man-esque, he can tell you every nut, bolt, and spec for each of his 150-plus cars.

In sharp contrast, I can barely tell you where windshield wiper fluid goes on my car, so it was quite an overwhelming experience. The passion that Jay has for the cars is one completely grounded in humility about owning them. Not once did he brag about owning a car, but instead was always grateful to have them, and I could tell this was genuine. For a celebrity of his level to be so removed from any ego renewed my faith in humanity.

This photo shoot returned me to the career I love in an environment that restored my confidence in safely returning to set. I feel immediately back at the top of my craft and ready for the next photoshoot and welcome any challenges that may arise.