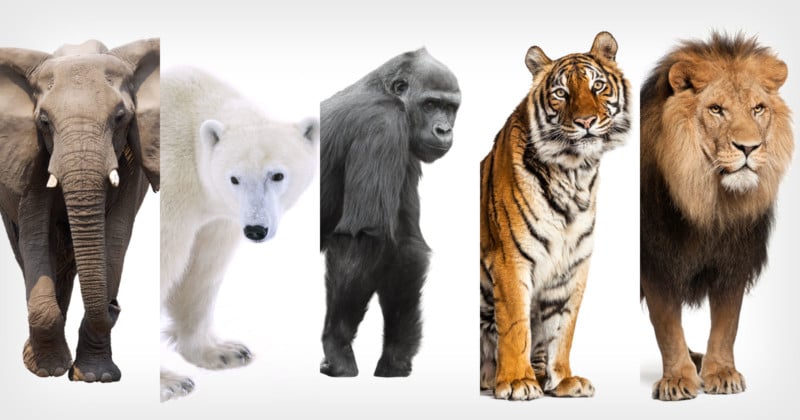 An international initiative called the New Big 5 project has announced the new Big 5 animals for wildlife photographers to pursue trophy photos of.

The “Big 5” is a historical term used by trophy hunters in Africa to group the five most prized and dangerous animals to shoot and kill. This group consisted of the elephant, rhino, leopard, Cape buffalo, and lion.

Since the project was founded in April 2020, over 250 prominent photographers, conservationists, and wildlife charities have begun supporting the initiative.

As the name of the project indicates, the goal is to reclaim the term “Big 5” as one that speaks of photographing the beauty of wildlife rather than killing the creatures.

The idea is “to create a New Big 5 of Wildlife Photography, rather than hunting,” the project states. “Shooting with a camera, not a gun.”

After a year-long vote by participants from around the world, the 5 animals that were selected are the elephant, polar bear, gorilla, tiger, and lion.

Each of these 5 species is listed by the International Union for Conservation of Nature (IUCN) as Critically Endangered, Endangered, or Vulnerable.

“These 5 animals […] are such beautiful and remarkable species, and are wonderful ambassadors for the world’s wildlife, from iconic species to little-known frogs, lizards, fish, and birds,” says Dr. Jane Goodall. “So many face threats to their survival from issues such as poaching, habitat loss, and climate change. A million species are at risk of extinction.

“If we work together, we can stop this happening. There is always hope. Change is possible if we each play our part.”

These 5 selected animals will be the ones referred to by the term “New Big 5,” the initiative is meant to raise awareness for wildlife as a whole.

“The 5 animals in the New Big 5 are the tip of the iceberg in the crisis facing the world’s wildlife,” the project states. “The goal of the New Big 5 project is to raise awareness about the many different species facing problems, from pangolins, orangutans, and rhinos to little-known, under-appreciated species.”

“The New Big 5 consists of […] some of the most iconic animals on our planet,” says wildlife photographer Marsel van Oosten. “They’re a stark reminder of what’s at stake if we don’t change our ways. That’s how I will look at each of them, as beautiful representatives of the many thousands of other, often lesser-known species who desperately need our help.”

If you’d like to participate in the New Big 5 project, you can tag photos and posts with the hashtag #newbig5 on social media. The project’s website also features articles, interviews, podcasts, educational packs, and more.

NPPA Gets Funding to Educate Police, Journalists About Right to Record