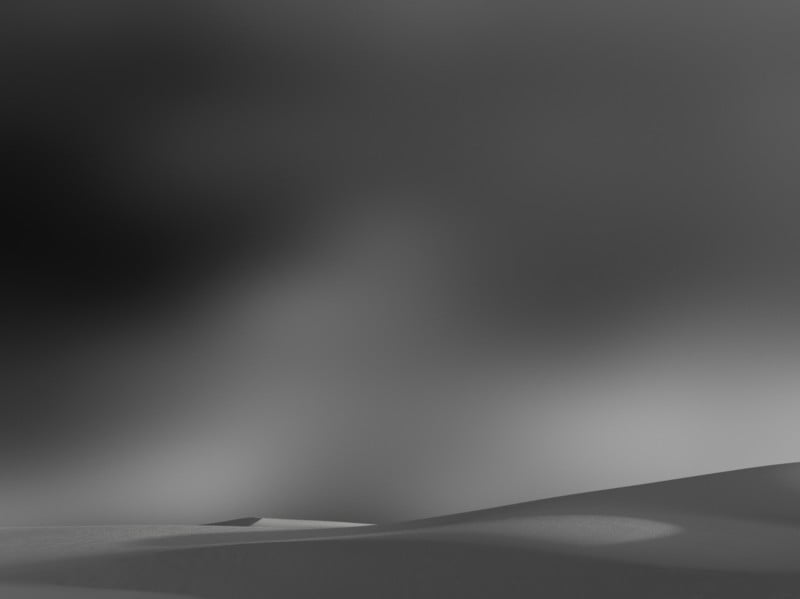 I have been fascinated by horizons for as long as I can remember. Growing up along Lake Michigan is where my earliest memories and impressions of these horizons were formed and through the years I have remained close to these endless, wandering and mesmerizing landscapes.

From the Great Lakes, to the California coast, to the Atlantic Seaboard, to the Arabian Sea on India’s western shore, to the Sinai Peninsula, and to the expansive deserts of the American southwest, I have lived and worked in these landscapes and continue to find endless stories and inspiration in them. 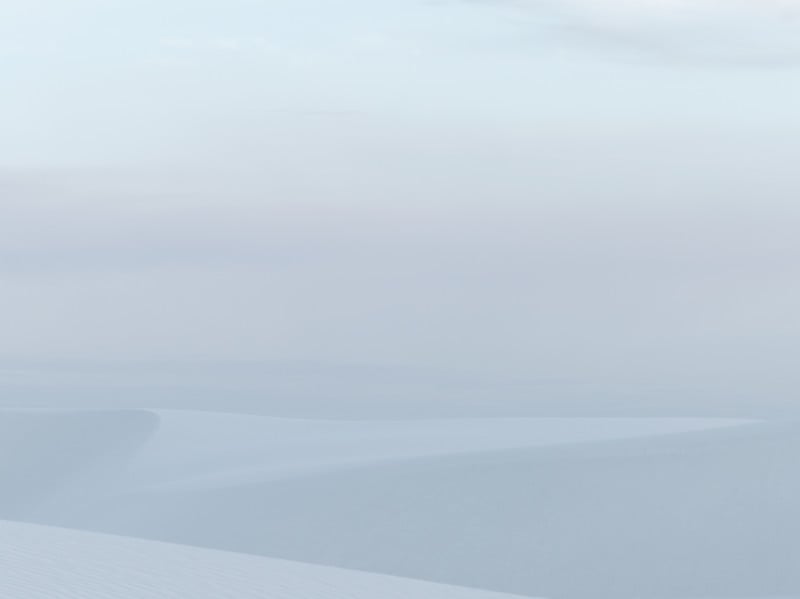 Beyond the simple beauty of these places, the pure metaphysical notion of “horizon” is one that opens the imagination. I feel free in these places to wonder, almost child-like, imagining mysteries on the other side, or thinking perhaps that these horizons might never end, or of new worlds lying on the other side. These are places where dreams seem real.

In fewer than 100 years, the health of these land and sea ecosystems has been altered dramatically. Increasing populations coupled with increased demand for resources are straining the systems to critically dangerous levels. Consumption is necessary, but I would advocate for better-balanced use and management of these fragile and finite resources. 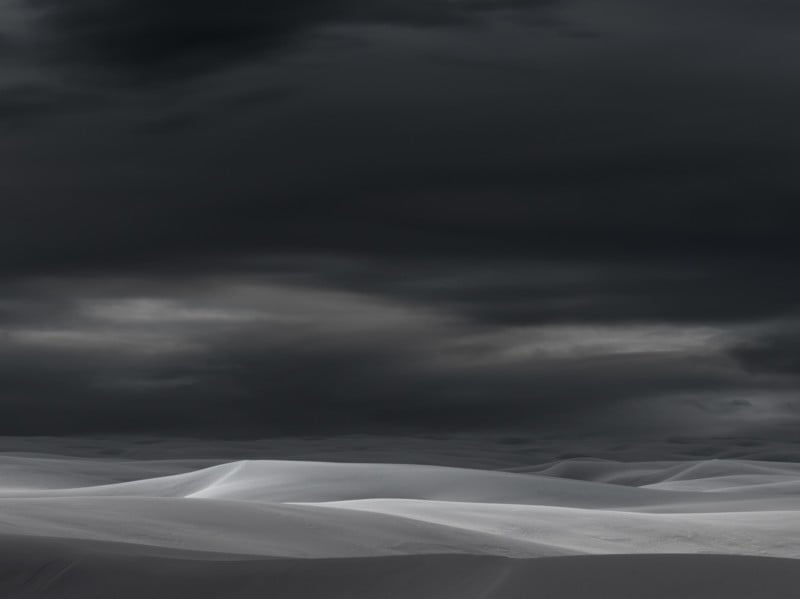 To the traveler of 100 years ago, the deserts of the American southwest seemed endless, foreboding and completely inhospitable. Today, as technology advances and demand increases, our impact on the deserts grows unabated. Urban expansion, water resource mismanagement, climate change and fossil fuel exploitation are a few of the challenges these ecosystems face. Unfortunately, we have largely been unable to create a cohesive, long-term sustainability policy.

The American desert environment is highly diverse, containing approximately 100 parallel mountain ranges which cast enormous rain shadows over dozens of basins. The four primary deserts, Great Basin, Mojave, Sonoran, and Chihuahuan, range in elevation from several hundred feet below sea level (Death Valley) to around 10,000 feet above sea level and cover an area in excess of 400,000 square miles or roughly the size of Ontario. The Saguaro cactus and the Joshua tree are two of the many plant species which exist nowhere else on the planet. Wildlife is abundant, although largely nocturnal. Mountain lions, pronghorn antelope, coyotes, Gila monsters and scores of other reptiles, birds and mammals thrive in these desert regions. 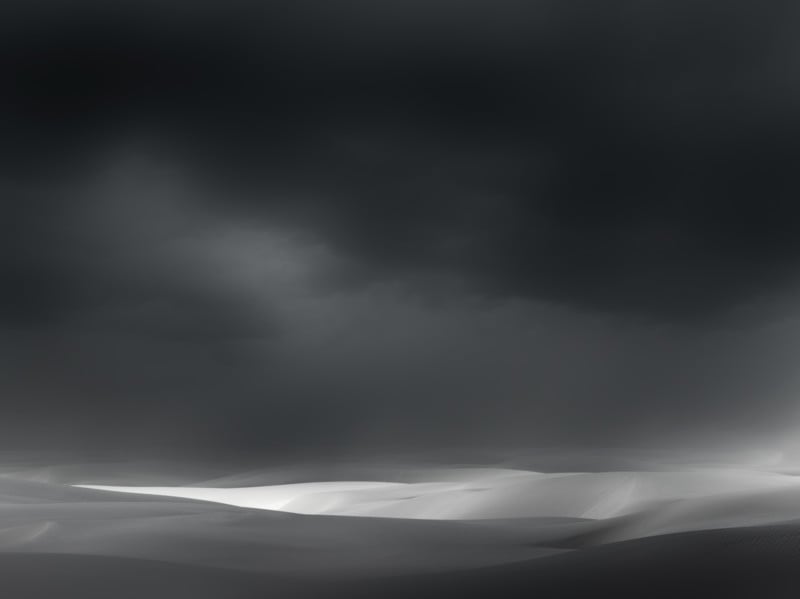 I’ve always felt that the deserts can be best appreciated by looking closely and by living with them for extended periods. At first glance, they are not the majestic landscapes of the Rockies or the Grand Canyon. I find their beauty in the stillness and quiet and ever-changing forms, particularly the dune fields of the southwest. These places tend to be quiet, where listening and carefully watching reveal their subtle character. Deserts are places where the wind or a storm can alter their physical character overnight. The slightest rain shower can create a burst of colour in the sparse vegetation. 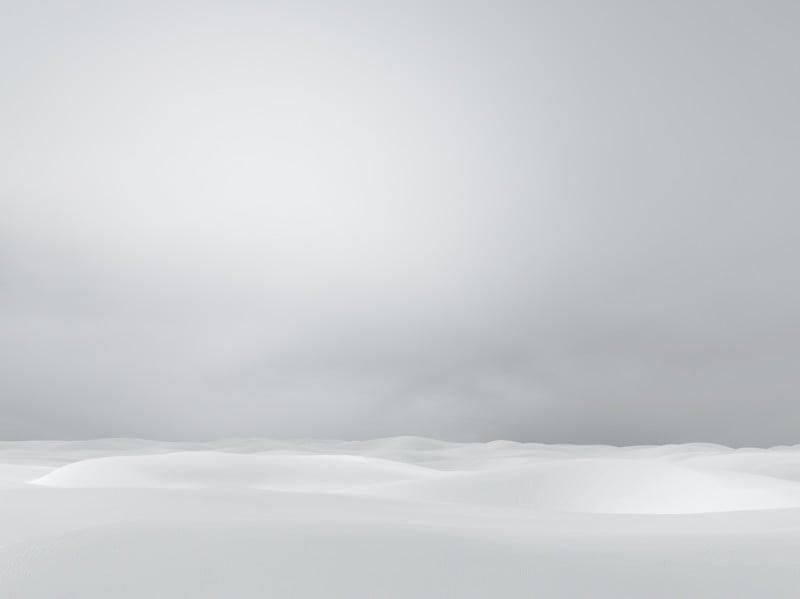 The light in the American southwest can be remarkably clear. Even in a cloudburst or a sandstorm the light penetrates the atmosphere, creating lines and shadows and shapes I have rarely seen elsewhere. I frequently look at weather reports for changing weather, knowing that change is often a good thing and a great opportunity to photograph.

I consider my work what might be called “activist.” At some point, many years ago, I realized that simply taking better pictures of the same things no longer worked or mattered. I understood then that the work of some of those I admired, people like Robert Adams and Richard Misrach, posed questions and made observations about our relationship to the land, all in a brief 1/30th of a second. Trying to be a good storyteller and a good photographer is what has driven my work since. 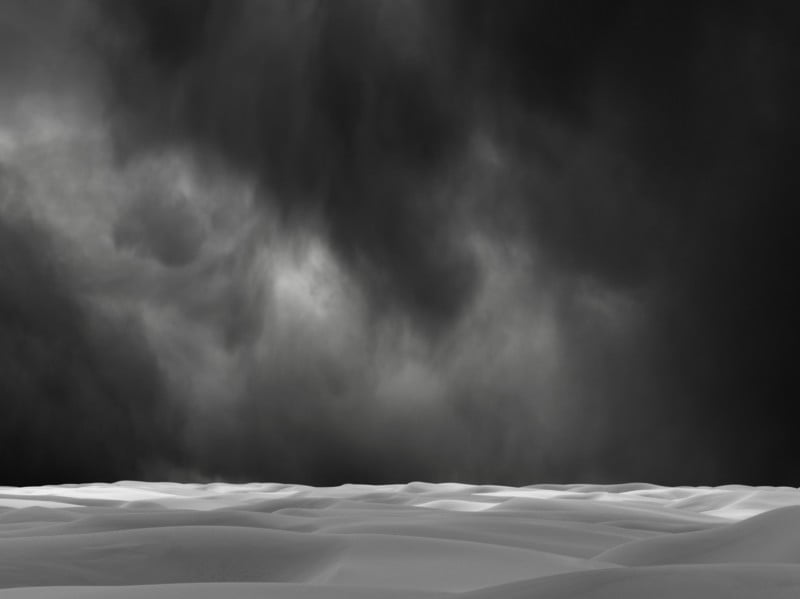 Although purely landscape, the desert work has helped clarify my thoughts about many things which we continue to question and deal with today including land use, shared responsibility and climate change. Personally, you may encounter emotions of fear or loneliness, or the minute scale of a single human being, or simply, beauty. 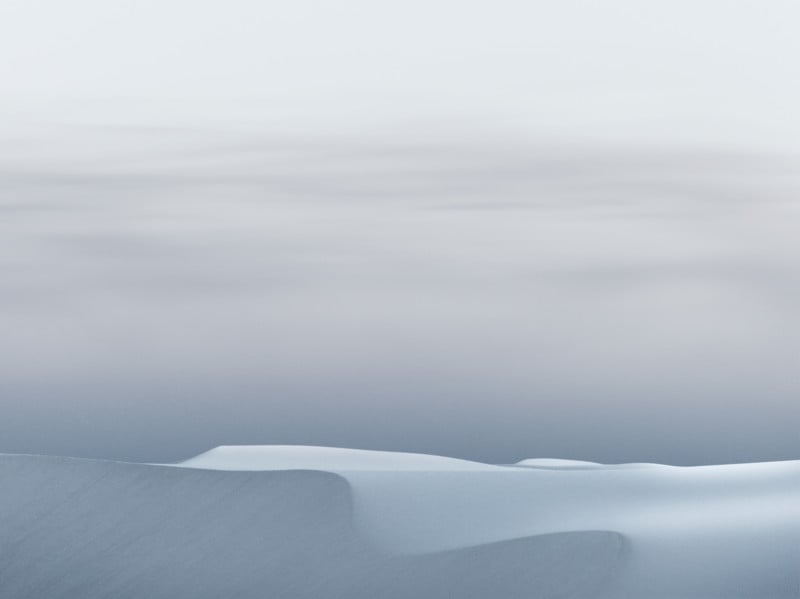 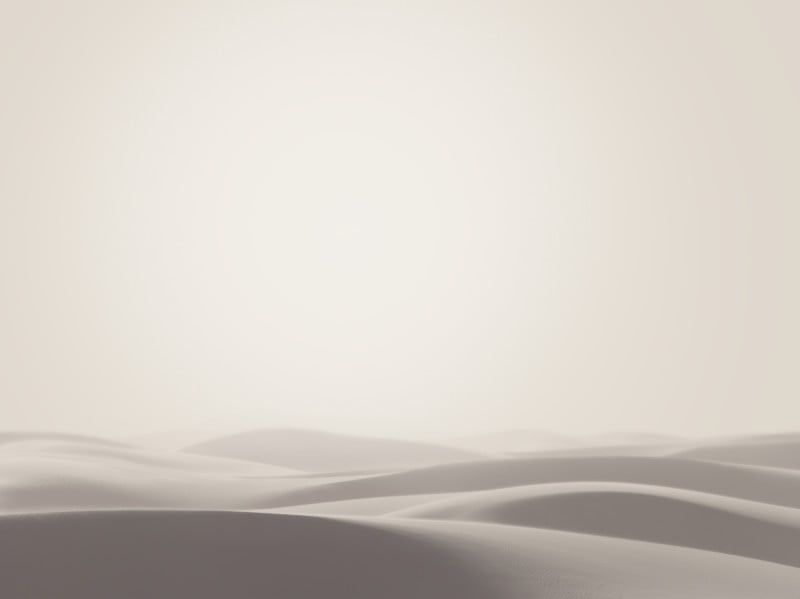 When working on the road I live in my truck camper (made in BC!), which enables me to get into and stay in remote and secluded areas. The camper is equipped with enough solar power to keep systems charged and I carry 70-80 gallons of water, a dirt bike, and extra fuel for the truck, enabling me to stay onsite for several weeks. Staying onsite is important as I frequently work into the night and in poor weather.

I’ve been shooting with a Contax 645 for many years and continue to use it for a variety of projects. I’ve used it in India and parts of Southeast Asia many times for landscape, portrait work and documentary projects. For the desert work it was also a good fit. I rarely shoot 35mm, and an 8×10 view camera, which I still use for some work, would not have been the best choice, particularly since I work alone. Most of the desert images were shot with either a Zeiss Sonnar 210mm F4 or a Zeiss Sonnar 140mm F2.8 lens. The desert images were shot with a Leaf back on the Contax. More recently I’ve been shooting with a Phase One back which has been a great tool for my work. 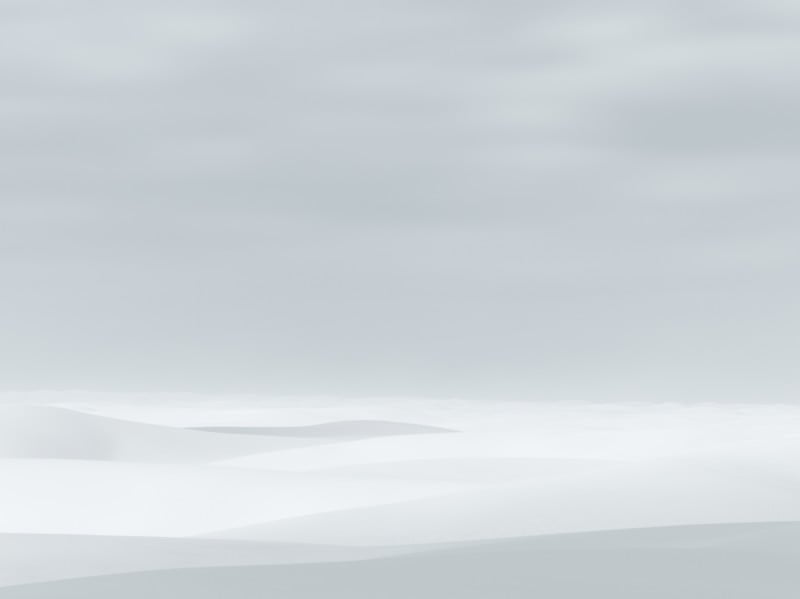 Most of my work now is digital, particularly when I’m overseas. On an aerial shoot years ago in Asia, I shot 100 rolls or so of 120 colour negative film from a single-engine Cessna. At the time, doing aerial photography in this country was very much a grey area. I love this place but getting permission to do something is like moving mountains and the work was simple landscape, after all. Having seen me at the airport for three consecutive days prior, as I boarded the Cessna, security had become suspicious. The following day, my wife, daughter and I boarded a jet bound for home. Just as we settled into our seats an announcement came over the intercom: “Mr. Zimmerman, please deboard the airplane.”

As I walked down the stairs to the tarmac, in the dark, I could see five armed security officers standing next to a cart containing my family’s six bags. “Are these yours?” one asked. “Yes,” I said, as they motioned me back to the plane. When we arrived home many hours later, it was obvious that they had rifled all the bags, looking for film, which they never found. My wife had the 100 rolls in her carry-on. 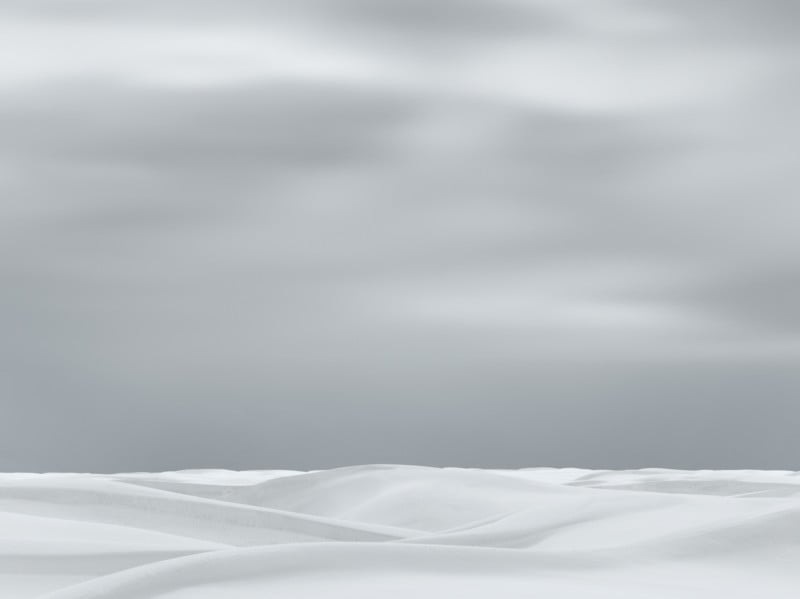 The article is courtesy of ELEMENTS Magazine. ELEMENTS is the new monthly magazine dedicated to the finest landscape photography, insightful editorials and fluid, clean design. Inside you will find exclusive and in-depth articles and imagery by the best landscape photographers in the world such as Freeman Patterson, Bruce Barnbaum, Rachael Talibart, Charles Cramer, Hans Strand, Erin Babnik and Tony Hewitt, to name a few. Use the PETAPIXEL10 code for a 10% discount off the annual subscription.

About the author: David Zimmerman is an American photographer who works on long-term projects of landscape, portrait, and social documentary photography. He is best known for his landscape photographs in the desert regions of the southwestern US, his work in homeless and marginalized American communities, and for his large-scale portraits of Tibetan refugees in India. David’s work is exhibited internationally.

Zimmerman is co-founder of the Himalayan Art Centre, a free-school open to all. The Art Centre is dedicated to teaching visual storytelling through photography and filmmaking in under-served regions of the Indian Himalayas. Zimmerman is a member of the World Photographic Academy.