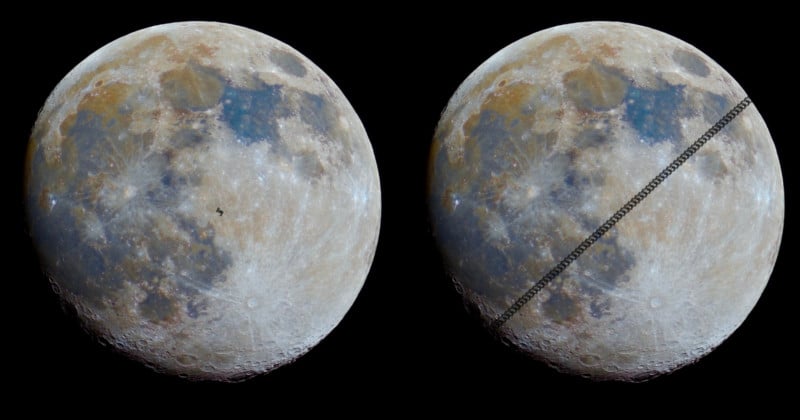 At the end of March, photographer Alexandru Barbovschi photographed the split second it took for the International Space Station to pass in front of the moon. After perfectly capturing the rare passing, he spent a few more minutes taking additional images to create what is known as a “Mineral Moon.”

It should be noted that just capturing the International Space Station (ISS) passing in front of a full moon is incredibly challenging. In addition to planning and scouting a perfect location, a photographer would still have to perfectly time their camera to capture an event that takes less than a second to happen.

“I actually decided to try and capture it the evening before, when I saw a chance to get proper weather around the transit time,” Barbovschi tells PetaPixel. “I pinged my good friend and asked him to help me out. He agreed, so two hours before the transit, we hit the road!”

Barbovschi says that he was ready to capture the event just 20 seconds before it was set to take place, cutting it incredibly close. In his words, it was “very tight timing.”

Even with the pressure of time, Barbovschi managed to capture the event, which only occurs for just 0.7 seconds in real-time.

“To give better conditions to watch it, I slowed down the video by about four times,” he says, explaining that the video shown above was captured at 100 RAW frames per second using a monochrome astronomy camera.

Barbovschi used a Sky-Watcher Star Adventurer mount and a Sky-Watcher Evostar 72ED (72/420mm) along with a filter wheel with Baader LRGB filters set (for the transit, Barbovschi says that a UV/IR filter was used), a Barlow 2x, and a ZWO ASI174MM camera.

“To get the color shot RGB channels, I shot 3,000 frames for each channel (and 3000 more through UV/IR filter, which was used as L channel later on),” he explains. “As the moon doesn’t fit the field of view in this configuration, two panels were shot.”

Afterward, he recorded additional photos and videos using a set of color filters. The ISS was then cut out and stacked to increase the quality and sharpness and the additional RAW videos were processed and assembled into a color lunar disk. 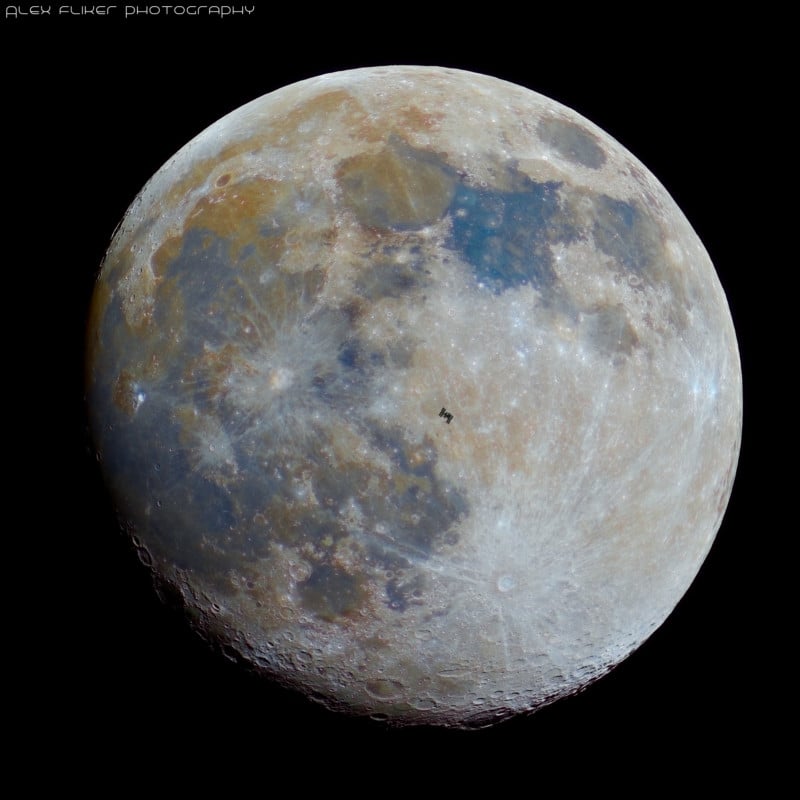 The finished color moon image is what is known as a Mineral Moon. As described by Nasa, Mineral Moon images are recorded through specific spectral filters and combined to create an exaggerated false-color scheme that is used to explore the composition of the lunar surface as changes in mineral content produce subtle color differences in refracted light. In some cases, the method is used for the purpose of study, but in Barbovschi’s case the technique was employed for visual impact.

“The ISS was cropped out manually using Gimp, and then stacked and sharpened using cvAstroAlign (25 frames out of 70 went into stack). The moon was stacked using AutoStakkert! 3, and then I aligned the channels using PlanetarySystemLRGBAligner, and then combined them to obtain RGB using ImageMagick.

The assembled panorama was created using Hugin, with all post-processing done in RawTherapee. Finally, the ISS was added back into the image using Gimp. Barbovschi says his final photo and video show the ISS on a color moon photo exactly into the position it was originally captured but superimposed on a more eye-catching, visually stunning backdrop. The amount of effort it took him to produce the images and video is staggering, but the quality of the work was no doubt worth the effort.

Image credits: Photos by Alexandru Barbovschi and used with permission.