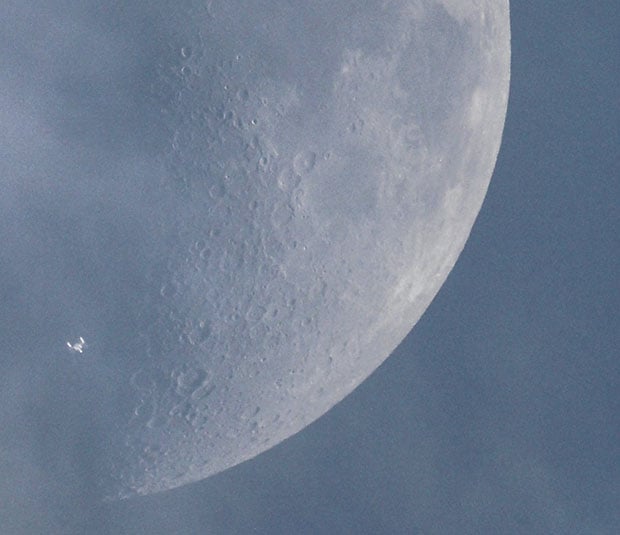 Dumitrana, Romania-based astrophotographer Maximilian Teodorescu recently got his hands on an 1800mm f/12 Maksutov telescope and decided to put it through its paces this past weekend. He decided to test out the imaging quality by using it to photograph the International Space Station passing in front of the moon in broad daylight. The beautiful photograph above is what he ended up capturing.

In the past Teodorescu had captured a number of photographs of the ISS’ silhouette passing on front of the Sun or the Moon, but this time the space station was fully illuminated — in fact, it was even more bright than the moon in the background. The Sun was still hanging at around 26 degrees above the horizon at the time.

Teodorescu shot the photograph using a Canon 550D looking through the telescope. It was an ISO 800 image with a shutter speed of 1/1250s.

Spaceweather writes that the ISS passes in front of the face of the moon for just “a fraction of a second” (around 0.6 seconds) as it orbits our planet at 17,000 miles per hour. Teodorescu looked up exact transit times using CalSky and then used his reflexes to nail the shot.

After seeing the photograph being shared online, actor George Takei, best known for his role as Hikaru Sulu in Star Trek, commented on Facebook: “My goodness, from this angle it looks like a certain starship I once flew.” 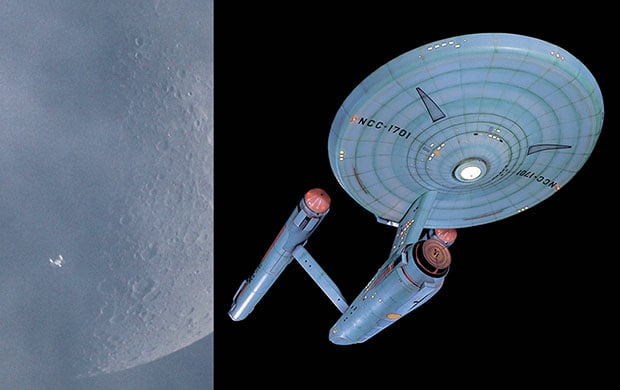 You can find a larger version of this photograph over on Teodorescu’s blog.

(via Spaceweather via Imaging Resource)