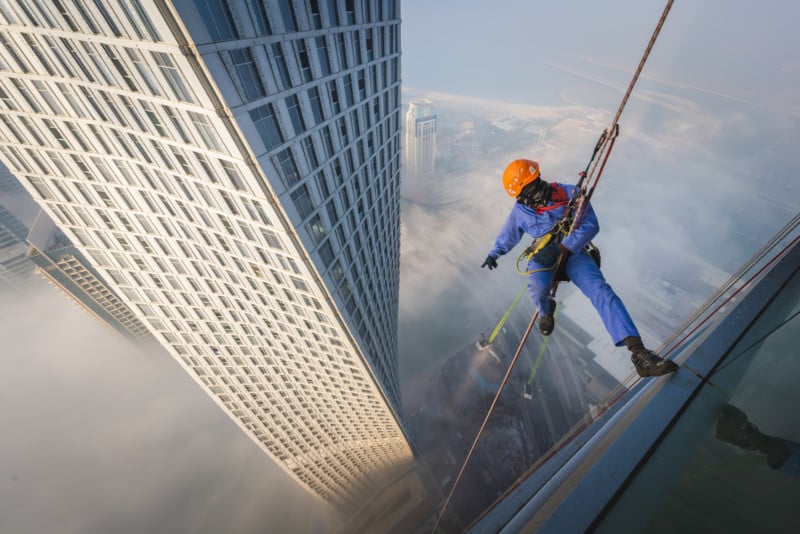 Photographer Albert Dros was photographing the infamous and elusive fog in Dubai recently when had the opportunity photograph window cleaners dangling from the ultra-tall skyscrapers. The job and Dros’ resulting photos are not for the faint of heart.


“On February 16th, I found myself on a rooftop on an early morning in Dubai,” Dros tells PetaPixel. “It was another beautiful foggy morning and the shooting conditions were just great. Thanks to Rami Dibo, who brought us to that roof that morning.”

Dros was there to shoot more photos of the city’s skyline rising above the clouds, but then he encountered the window cleaners.

“At some point, some workers entered the roof,” Dros says. “They were talking, having coffee, and were fiddling a bit with the ropes on the roof. I asked them what they were doing and they said they were preparing for the window cleaning of the tower that we were standing on. I asked them if I could take some photos while they were going down. They said that would be no problem at all.”

“I found the shots of this simply spectacular,” Dros says. “Photographing these with a 12mm lens gave such a crazy perspective, especially with the twisted Cayan Tower covered with fog as a backdrop. The shots simply look surreal.”

Cayan Tower has 75 stories and stands 1,004 feet tall (306m). It was briefly the world’s tallest high-rise building with a twist of 90 degrees after it opened in June 2013, but it was surpassed by the Shanghai Tower in February 2015.

The workers slowly made their way down the skyscraper and eventually disappeared into the clouds. 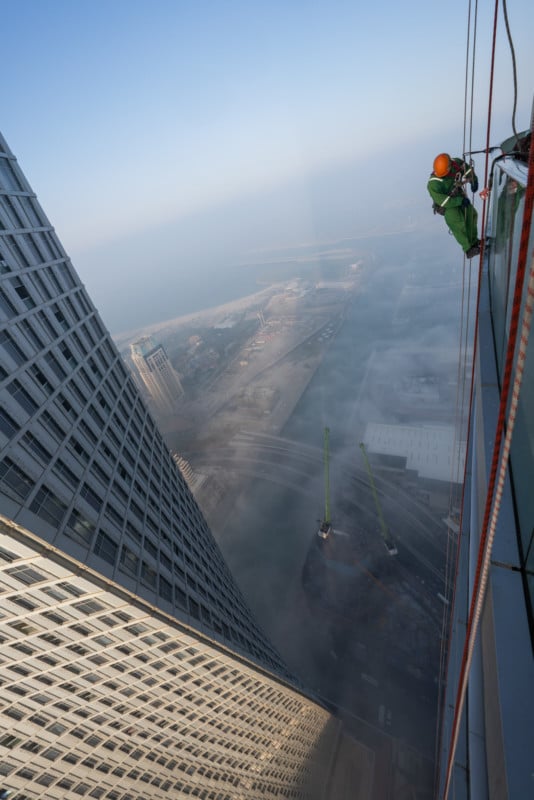 “The whole sequence went very fast,” Dros says. “I was surprised how fast they went down. This sequence of shots was really incredible to shoot and to witness. Definitely not for people who are scared of heights!

“Thanks to these guys for doing this incredible work and letting us document it.”

P.S. “Be sure to check out the work of my friends who were there with me that day: Andy Marty and Daniel Kordan,” Dros says. “Lastly, one of the window cleaners named Santos asked me to send him the pictures. I put his number down but never received a reply from him. Maybe I put it down wrong, so I hope Santos and his coworkers will see the photos through the Internet!”

Image credits: Photographs by Albert Dros and used with permission