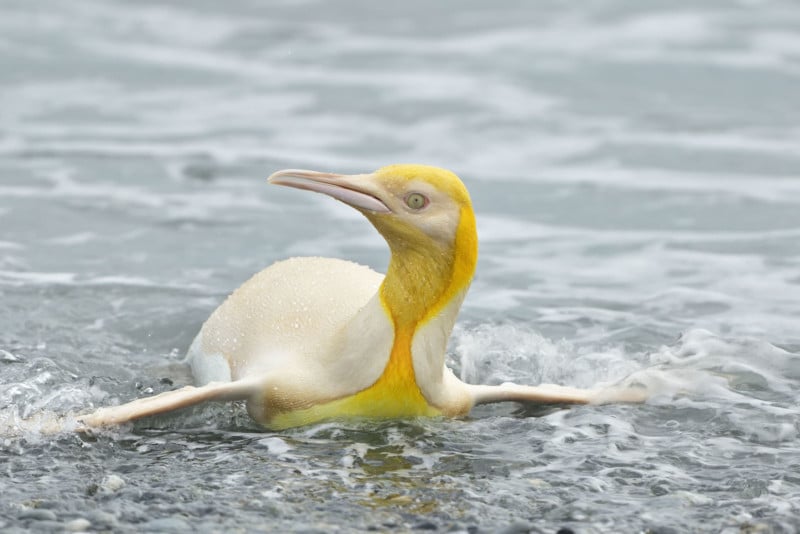 A wildlife photographer has shared a once-in-a-lifetime photo of what he believes is a “never before seen” yellow penguin.


Belgian landscape and wildlife photographer Yves Adams was leading a two-month photo exhibition in the South Atlantic in December 2019 when the group made a stop on an island in South Georgia to photograph a colony of over 120,000 king penguins.

While unloading some safety equipment and food onto Salisbury Plain, Adams noticed an unusual sight he had never seen before: a penguin with bright yellow plumage.

“I’d never seen or heard of a yellow penguin before,” the photographer tells Kennedy News. “There were 120,000 birds on that beach and this was the only yellow one there.”

Luckily for the photographers, the tropical-looking penguin landed on the beach close to the group, meaning they had a perfect view of it unobstructed by the sea of penguins and seals in the area.

“We were so lucky the bird landed right where we were,” the photographer says. “Our view wasn’t blocked by a sea of massive animals. Normally it’s almost impossible to move on this beach because of them all.

“It was heaven that he landed by us. If it had been 50 meters away we wouldn’t have been able to get this show of a lifetime.”

The penguin’s strange coloring is due to a condition called leucism, which results in a loss of pigmentation.

“This is a leucistic penguin,” Adams says. “Its cells don’t create melanin anymore so its black feathers become this yellow and creamy color.”

Scientists have found that the yellow pigment in penguin feathers is chemically distinct from all other molecules that are known to give color to feathers.

“Penguins use the yellow pigment to attract mates and we strongly suspect that the yellow molecule is synthesized internally,” researcher Daniel Thomas tells Smithsonian Insider. “[It’s] distinct from any of the five known classes of avian plumage pigmentation and represents a new sixth class of feather pigment. As far as we are aware, the molecule is unlike any of the yellow pigments found in a penguin’s diet.”

In the case of this fully-yellow penguin, however, it’s unclear whether its distinctive plumage makes the bird ultra-attractive or ultra-repulsive to the ladies.

Yves captured thousands of photos over the course of the expedition, which continued for 8 more weeks after this memorable sighting, and the photographer has just found and edited these photos in the course of trawling through the large collection.