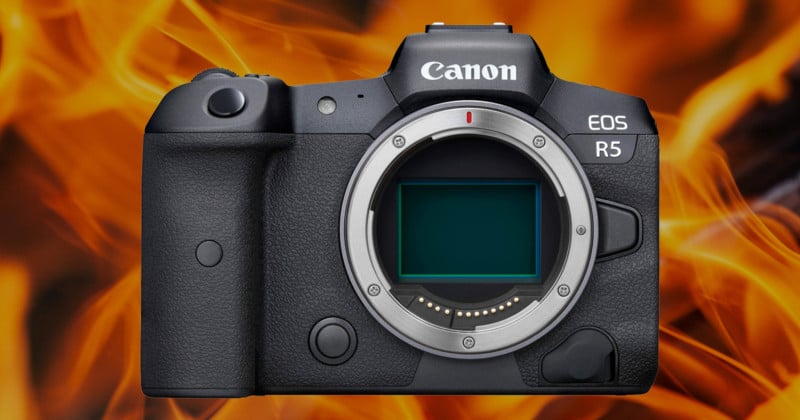 Ever since Canon declared that the newly-announced EOS R5 would be able able to shoot 8K RAW video with NO crop, people have been waiting to hear the “catch.” Would record time be super limited, or would the camera simply overheat very quickly? The answer, it seems, is “both.”

The whole controversy more or less began when a warning page—ostensibly supplied by Canon to “the largest UK pro-video dealership CVP”—was published online. We first saw it on EOSHD, and it shows the record time limitations and overheating issues inherent to a 45MP camera that shoots 8K/30p RAW video and 4K/120p 10-bit video, internally, with no active cooling to speak of. 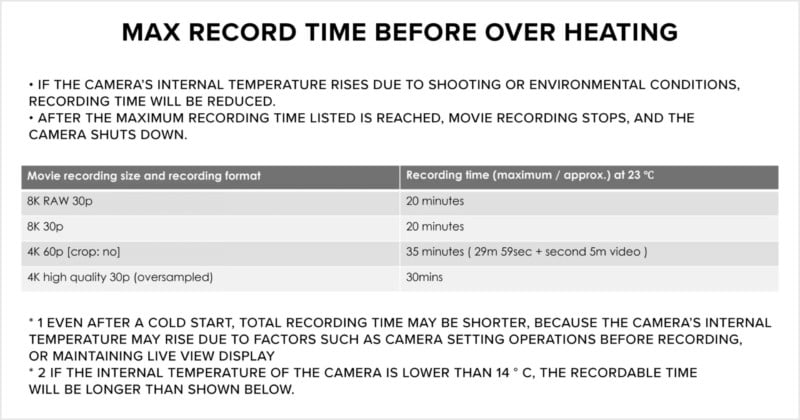 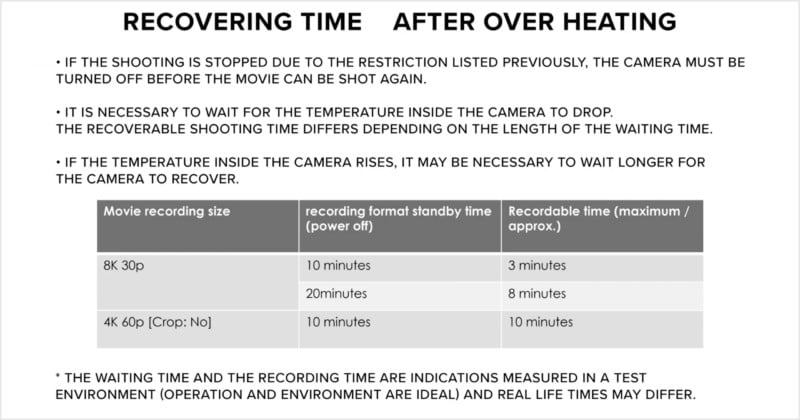 The charts show the maximum record times for 8K RAW and 4K/60p from cold start, under ideal conditions, followed by the maximum record time after the camera is allowed to cool off for 10 or 20 minutes. As you can see, if this information is accurate, it is extremely problematic for Canon… especially when you consider how recording in direct sunlight could affect these max times.

Having a maximum recording limit of 20 minutes on 8K RAW and 30 minutes on all modes is totally understandable. Not every camera maker has followed Panasonic’s lead yet by removing the standard 30 minute limitation on hybrid cameras, and some limit on the record time was expected. It’s the recovery times that look the worst.

Even after a 20 minute break from shooting, the camera is only expected to shoot for 8 minutes before overheating and shutting down once again; if you can only rest it for 10 minutes, you’ll only get 3 more minutes of shooting.

For stills shooters who would like the R5 because of its 45MP resolution and ultra-fast maximum shooting speeds, this isn’t a huge issue. If you won’t be shooting much video, you don’t have to worry about it. But for the filmmakers that Canon is targeting with this 5-series camera, limitations this dire are considered, by some, a total deal breaker.

As Gerald Undone posted to Twitter last night, it makes the EOS R6 and an external monitor seem like the better choice for many:

I think the Canon R6 with a Ninja V is a better use of money than the R5. Oversampled 4K60 with unlimited record times and a terrific codec, while leveraging the better pricing of sata SSDs over CFExpress. If I had to give a recommendation on specs alone, that would be it.

What do you think? Are these overheating and recovery issues—mentioned only in passing by the first reviews posted by Canon Ambassadors—a deal breaker for filmmakers looking to use the EOS R5 for their video work? And for stills shooters who also shoot video for their business, does this make the EOS R6, or a different camera entirely, sound like the better option?

Let us know in the comments.

Photographer Tests the Best Masks for Working During the Pandemic

What It’s Like to Document History: An Interview with Award-winning Photojournalist Evelyn Hockstein