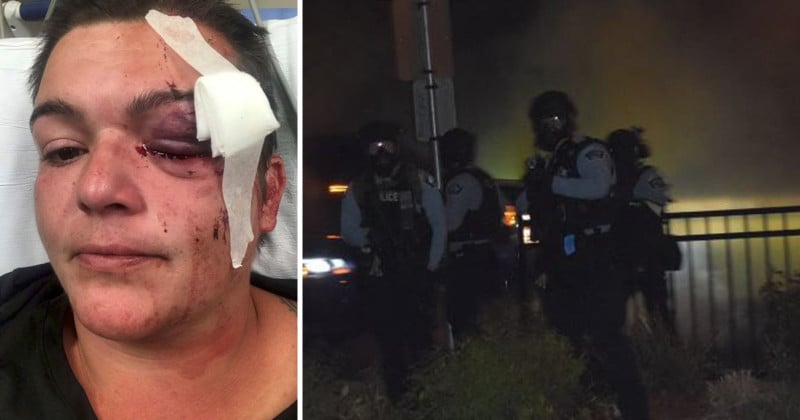 Last month, while covering protests in Minneapolis sparked by the killing of George Floyd, photojournalist Linda Tirado was blinded by a foam bullet fired by police. Now, she’s suing the city and its police department, and using her last photo as proof that she was targeted despite being clearly identified as press.

The incident, which we initially covered here, took place on the evening of Friday, May 29th.

According to court documents obtained by PetaPixel, Ms. Tirado “stepped in front of the protesting crowd and aimed her professional Nikon camera at the police officers to take a picture of the police line.” Despite the fact that she was wearing visible press credentials, the complaint claims that police first marked her using a bright green ballistic tracking round, before “[shooting] her in her face with foam bullets.”

One of those bullets apparently shattered the protective goggles she was wearing and hit Ms. Tirado in her left eye. Despite being rushed to the hospital for surgery later, the eye was “permanently destroyed.”

Ms. Tirado is now suing the City of Minneapolis, Minneapolis Chief of Police Mederia Arradondo, Lieutenant Robert Kroll, Public Safety Commissioner John Harrington, State Patrol Colonel Matthew Langer, and four officers who are identified only as “John Does 1-4,” alleging that she was targeted by police despite the fact that she “ensured her press credentials were displayed prominently around her neck.”

In fact, the lawsuit alleges that the Minneapolis Police Department and Minneapolis State Patrol “did not hesitate [to attack] the press” as “coverage of law enforcement misdoings began to grow.”

In Ms. Tirado’s case, the complaint accuses the police of using “excessive, unprovoked, unreasonable force to prevent Plaintiff from exercising her constitutional rights was intended to cause imminent harmful and offensive contact.” And as proof that she was, in fact, targeted despite her credentials, Tirado has provided the court with the image below, taken moments before she was blinded.

The photo shows an officer, ostensibly one of the “John Does” who is named in the suit, aiming his weapon directly at the camera:

There are six claims listed in the complaint, including Fourth Amendment Use of Excessive Force, Civil Conspiracy to Violate Plaintiff’s Constitutional Rights, Assault, and Battery.

For more details, you can read the full 34-page complaint below:

As a result of all of the above, Ms. Tirado is seeking compensatory damages for the injuries she received and work she is going to miss as a result, punitive damages to prevents the police from acting in the same manner in the future, attorney’s fees, and a ruling that the police’s use of excessive force was, in fact, unconstitutional and violated her First and Fourth Amendment rights.

Calculating the Distance of Wildlife in a Telephoto Shot