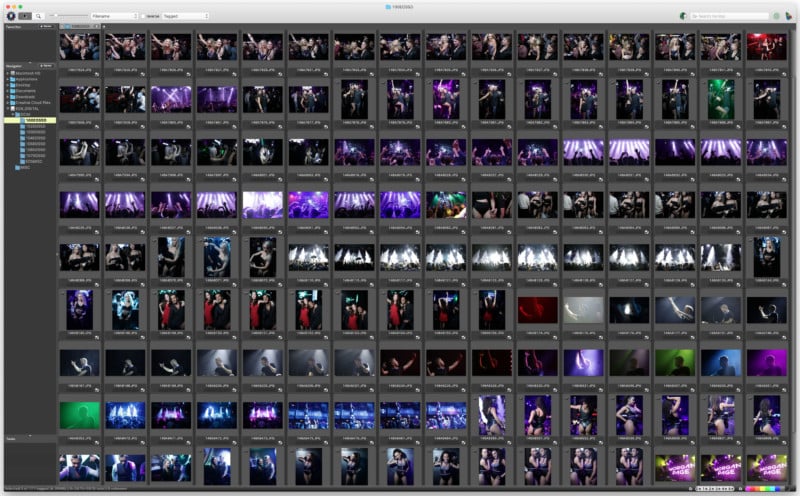 Any event photographer gets tons of requests from people asking for specific photos from an event. Sometimes they will acquiesce, but often not. Don’t nag them if they don’t get back to you or say no. Here’s why.

I often take as many as 2,500 photos in a night shooting a show, and only 2-4% of those will ever see daylight. The process of trimming the 96%+ of rejects is called “culling” and it consumes a significant portion of the post-processing time.

Even if your photo made it past culling, it’s not as simple of just sending it over. What we have now are 40MB RAW files. A RAW file is the data captured by the camera’s light sensor, which includes information your eyes can’t see. These files cannot be used in any social media app or opened by anything other than software built to do so, such as Photoshop or Lightroom. Photographers shoot in RAW to give themselves more options in post-production, such as bringing out details from shadows without creating artifacts. These need to be edited (which is BIG) and then converted to JPEG before they become anything that can be used by normal people.

Then there’s resizing, watermarking, uploading, and delivering. Every photographer who deals with any sort of volume has refined a workflow that allows them to get from a memory card full of RAWs to a client-deliverable album in as few hours or days as possible. Asking for specific photos is asking them to take time to go outside the workflow they’ve built to keep themselves sane.

Attendees often mistakenly think event photographers are there for them. I definitely want to make all the guests happy and create photos of them that they’re psyched about, but ultimately I’m working for a client to create marketing material. My first and foremost effort is to serve the client, not the guests. After all, the clients are the ones who are paying for my time and talent.

#3. The photographer doesn’t want to spread work that didn’t make the cut.

At a certain point, photographers are hired for their style instead of just their ability to use the equipment. If a photo didn’t make the final deliverable, it probably didn’t fit the photographer’s style or failed to attain the degree of image quality (composition, focus, exposure) that the photographer holds themself to. Asking for that photo is asking for them to make public work that they don’t want to be associated with in a profession that is built on reputation.

Asking a photographer for photos you didn’t hire them for is no small ask. For the photographer, it involves spending time in post-production, serving someone who didn’t pay them, and doing something they’re probably uncomfortable with artistically. I’m not saying don’t ask. I’m saying if you ask, know that you are asking a lot.

About the author: Andrew MacRobert is a nightlight and lifestyle photographer based in Boston, Massachusetts. The opinions expressed in this article are solely those of the author. You can find more of MacRobert’s work on his website, Facebook, Twitter, and Instagram. This article was also published here.